Mad Max: Fury Road is hitting theaters this weekend and I couldn’t be more excited! Taking one of the greatest action franchises in movie history and casting Tom Hardy –one of the most talented and versatile actors of today- seems to be a recipe for greatness. Let’s hope it is! In anticipation of Fury Road, I have crafted for you a list of what are –in my opinion at least- the top five greatest movies of Tom Hardy’s career. For this list, I have decided to only include movies in which he is the lead or has a prominent role (sorry Inception). Let’s get started! 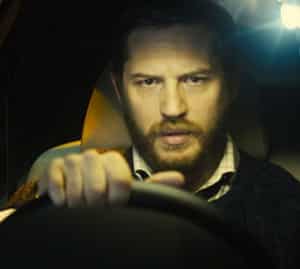 Last year’s indie thriller Locke admittedly sounds like a complete disaster on paper. Sure, “Tom Hardy driving” sounds fantastic in a Mad Max kind of scenario, but Locke’s version of “Tom Hardy driving” is far removed from the chases, stunts, and explosions that we’ll see in that movie. Instead, Locke is about a businessman driving on a highway (at reasonable speeds) while talking on the phone with his family and co-workers. That sounds more boring than anything and certainly doesn’t scream quality entertainment, but Locke works and works well due to the fact that it rests on the shoulders of our man Tom Hardy. As the central dilemma of the movie unfolds (I wouldn’t dream of spoiling what it is for you because finding out for yourself what it is as the movie goes along is one of the appealing aspects of Locke), he sells the desperation of his character as he is forced to deal with the choices he’s made in his life. Without Hardy, Locke would likely be the manifestation of pure boredom, but with him, it ends up being an intriguing character study and a showcase for a unique performance. 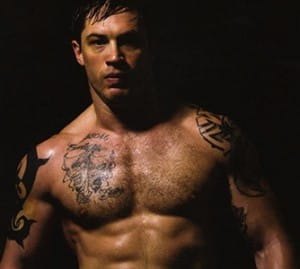 Warrior served as my introduction to Tom Hardy. While this 2011 mixed martial arts drama isn’t the most original movie out there, it succeeds thanks to some powerful, emotional work from Hardy and Joel Edgerton as two very different brothers thrown into the cage to compete with each other and Nick Nolte as their alcoholic father. Right away I knew that Tom Hardy was a name to remember. In a movie filled with great acting, he gave the best, most memorable performance playing an angry, bitter, young man who ultimately proves to have a generous heart. If you enjoy dramatic sports movies, I definitely recommend Warrior. 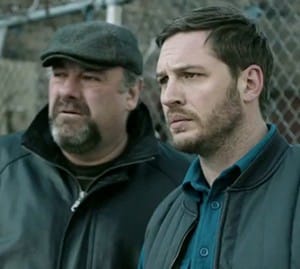 The Drop is one of those slow-burn crime thriller that relies heavily on the performances and the dialogue (think something like Killing Them Softly– except good). Tom Hardy plays another complex character who’s very compelling to watch. He’s a soft spoken and nice guy who nevertheless has a lot of suppressed anger deep down. He runs a mob bar with his cousin played by James Gandolfini (in top form in his final performance). As often happens in movie mob establishments, things go deadly. It’s highly entertaining watching well-written characters played by great actors play off of each other as everything falls apart. 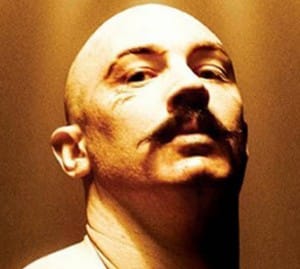 Believe it or not, there was time when Drive and Only God Forgives director Nicholas Winding Refn could make a movie that had more to it than Ryan Gosling staring off blankly into the middle distance for ninety minutes. That time was 2009 when he directed Tom Hardy in the bizarre, darkly comedic Bronson. Based on a true story but stylized past the point of believability, this movie follows “Britain’s most violent prisoner” Michael Peterson (or Charlie Bronson as he refers to himself) as he wreaks havoc in dozens of prisons and extends a seven year sentence into over forty years and counting. Why? Beats me. The character is an enigma and that makes the movie all the more intriguing. Bronson contains easily my favorite of all of Tom Hardy’s performances. He’s over-the-top, violent, and completely out of his head but also charming, funny, and weirdly likeable. Like Locke, this movie would have likely gone very wrong in the hands of another actor, but with Tom Hardy as the titular mustachioed nut-job, Bronson is a winner. 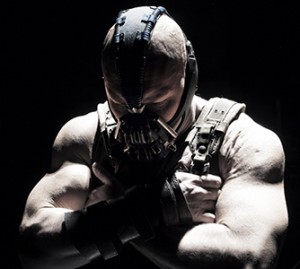 Of course! The top spot goes to the movie that made Tom Hardy a household name. Christopher Nolan’s epic conclusion to the Dark Knight trilogy is one of the most highly entertaining comic book movies ever made and it owes a lot of its greatness to a villainous turn from Hardy as Bane. Expertly creating a character who is an intimidating, Batman-breaking force to be reckoned with while also being entertaining to watch and very quotable, Hardy has given us a villain for the ages with Bane, and helps make The Dark Knight Rises into the fun, exciting, and emotionally resonant movie that it is. He also gets a lot of extra points for doing it all with half of his face covered up! Well, there’s my list! Did I leave anything out? Do you like Tom Hardy? Think he’s overrated? Underrated? Are you looking forward to Fury Road too? Let us know in the comment section below!