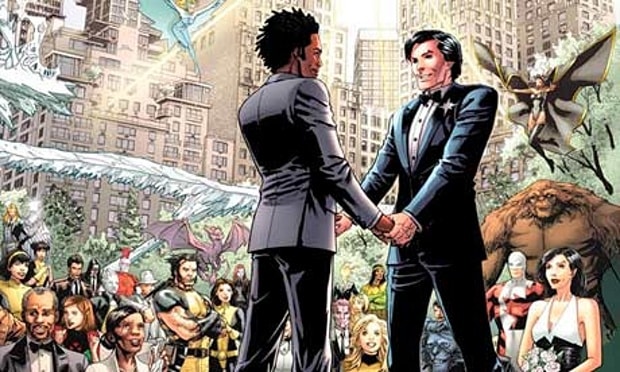 One of the biggest stories from last week was the landmark ruling in the Supreme Court, guaranteeing a right to same-sex marriage. So, while on the press tour for Ant-Man, Feige was questioned on if we’d see an LGBTQ character on the big screen within the next ten years:

When pressed further, he went on to add the following:

“Well in the drawing board going up to 2019 it remains to be seen. The comics always make the path that we get to have the fun of saying, ‘Yeah let’s choose this way or let’s choose this way’ and I think there are a lot of cool things happening in the comics now that—it’s usually a five to ten-year cycle between when something happens in the comics and when we can do it in the movie, sometimes a little less, but Civil War is certainly about the 10-year mark. Winter Soldier, I think, was around that time. So we always look at stuff that’s happening in the comics and go, ‘Where could we do that?’ Sometimes it’s sooner, but there’s no reason why that couldn’t happen in the next decade or sooner.”

Marvel and other comic-book movie producers have faced some backlash recently about the lack of portrayal for female and minority characters, with the #WeWantWidow campaign gathering attention, so will this cause a similar outcry for LGBTQ characters on the big screen?

Feige makes it sound like they’ve got everything tied up for the next 4 years, but that doesn’t mean that a character couldn’t be portrayed as LGBTQ. There are plenty of characters in Marvel comics who aren’t defined by their sexuality and 129 homosexual characters (according to Marvel Wikia), so there is nothing to stop them from taking the opportunity bring to LGBTQ characters into the mainstream.

With a worldwide audience, and several films banking over $1billion at the box office, Marvel has a platform to reach people on a massive scale. It would be commendable to represent a large part of our diverse community on the big screen.