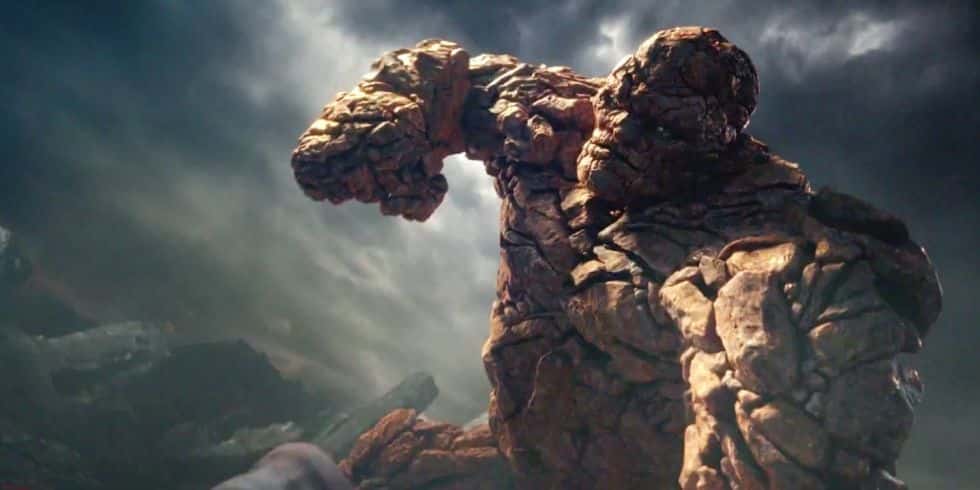 As you all probably know by know, Fantastic Four had a few problems. It also had a few scenes in the trailer that were not in the final cut of the film. One of the biggest scenes missing was The Thing launching from an airplane and then beating something into submission.

Well, among others – Entertainment Weekly was curious and got the inside scoop on the missing scenes. They spoke with numerous people involved with the film, and according to them, here’s what was supposed to go down:

A Chechen rebel camp in the wee hours of the night. There’s no explanation for where we are, but there are soldiers speaking a foreign language, and they are loading up some heavy-duty weaponry.
Crews are filling truck beds with the gear, preparing to mobilize – then a siren goes off. Everyone freezes, and one by one they turn their faces to the sky. A stealth bomber whispers by overhead, and a large object falls from it, streaking through the air at great speed.
The object – a bomb, a missile? – collides with the earth in the center of the camp, sending debris is all directions. The soldiers take cover, then tentatively emerge and walk toward the crater, where there is a giant pile of orange boulders.
Slowly, the rocks begin to move on their own, becoming arms, legs, a torso, a head …This rock-figure lumbers out of the smoke, and the soldiers level their weapons – then open fire. As The Thing lurches into view, bullets spark and ping off his impenetrable exterior.
Rather than some elegant, balletic action sequence, The Thing moves slowly and deliberately. He’s in no hurry. The storytelling goal was to show the futility of firepower against him as he casually demolishes the terrorists. It’s a blue-collar kind of heroism.
When it becomes clear this rock-beast cannot be stopped, the surviving Chechen rebels make a run for it – and that’s when a hail of gunfire finishes them off.
From the shadows of the surrounding forest, a team of Navy SEALS emerge with their guns drawn and smoking. The cavalry has arrived, but the enemy has already been subdued.
The film would then have shifted to a bird’s-eye view of the camp, an aerial shot showing waves of American soldiers flooding in to secure the base. Just when it appears the American soldiers may be ready to clash with the rock monster, The Thing gives them a solemn nod, and they clear a path. He lumbers past them, almost sadly, a heartsick warrior. Then he boards a large helicopter and is lifted away.
Only then does the movie cut to that conference room, where Tim Blake Nelson’s Dr. Allen is crowing to his military overlords about how this mutated team of scientists is helping do the heavy lifting for America’s rank-and-file soldiers.

In regards to why the scene was cut, there are conflicting stories. Some say Trank didn’t want it and others say that FOX wouldn’t finance the scene at all.

Do you think that this would have helped the film?

Be sure to sound off below!