Halloween III: Season of the Witch Is Great – Just Drop HALLOWEEN From The Title 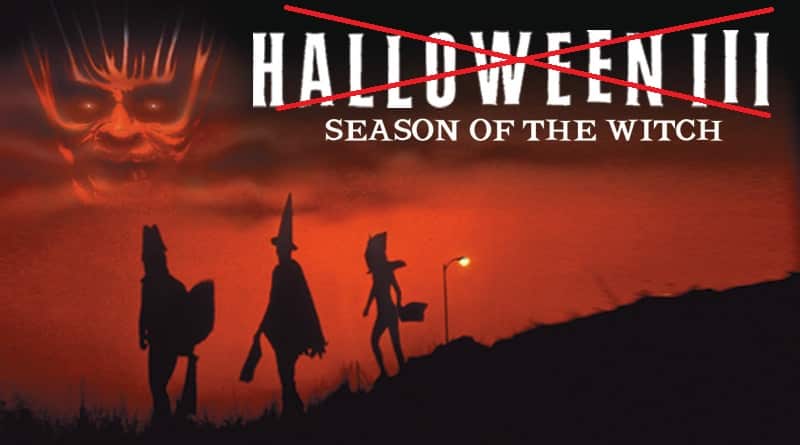 As horror fans let the hangover of festivities roll past them, it’s always a good idea to curl up with a good horror film to help the time fly by. They can range from the classic, to the obscure, to the downright “What the Fuck?”. One film that falls under the realm of classic, is John Carpenter’s original Halloween. It blew the door open on the slasher film genre, and influenced many future directors into emulating Carpenter’s method of storytelling, camerawork, and style of soundtrack.

The quality of the subsequent sequels would have the movies range from good, to bad, and back again, depending on your taste. Yet, one stood out on its own merit, and being that it was a full departure of everything that is Michael Myers, it subsequently should be held as a great horror film. It’s only curse is that it has the misfortune of being the 3rd film in the Halloween franchise.

At first, Carpenter and Hill were reluctant to do another Halloween film and decided only to return as producers, with Carpenter doing a bit of uncredited writing. Tommy Lee Wallace took reign as director and handled most of the writing for this installment. Carpenter and Hill wanted to step away from the Michael Myers story arch and decided to try something different. Their plans were to turn the Halloween name into a yearly event that would use the backdrop of Halloween as a recurring theme. If successful, the later films would be told in the vein of other well known anthologies like Night Gallery, The Twilight Zone, and The Outer Limits. With a budget set and a script featuring witchcraft, science fiction, and a hint of Invasion of the Body Snatcher, they were off to the races.

The story follows Daniel Challis (Tom Atkins) and Ellie Grimbridge (Stacey Nelkin) as they cross paths due to the murder of Ellie’s father, Harry. Before his brutal death by the hands of an oddly strong man in a suit, Harry was brought into the hospital exhausted from the struggle and raving hysterically about a mad plot that would cost the lives of millions of people while each succumbed to their death clutching an innocent looking Halloween mask. The story gets stranger and stranger, all culminating to an ambiguous ending that would leave you wanting more.

One of many things that helped this film reach such a level of great horror were the bits and pieces that were used from Carpenter’s previous film without being considered a rip off.  The film’s effects in one particular scene reminds us of the body horror that made The Thing so well known, but kept it within the realm of this world. Carpenter was even one of the folks that lent his talent as music composer in glorious fashion as the sound fits into the atmosphere and mood of the story.

This film stands out further than typical horror films by having a message for the audience that would stick with them after the final frame. It alludes to the evils of capitalism without force feeding it to the viewer, while raising awareness of what could happen if someone with too much money and power try to force their ideology on the general public. Another caveat, which is delivered by our main villain, is the idea that tradition is being lost over time as generations move forward and take certain holidays for granted.

Halloween III: Season of the Witch should be applauded for experimenting with a well known story and trying to mold something new and exciting for the franchise’s existing fan base. Due to the unfortunate lack of success of this film and mixed reviews, the studio decided to go back to the slasher genre formula and reworked the franchise into what it is known as today. It did something refreshing for the horror genre and could’ve been something great, if people would just forget the “Halloween” in the title and accept the unexpected.

Agree or disagree with the article? Let us know below!