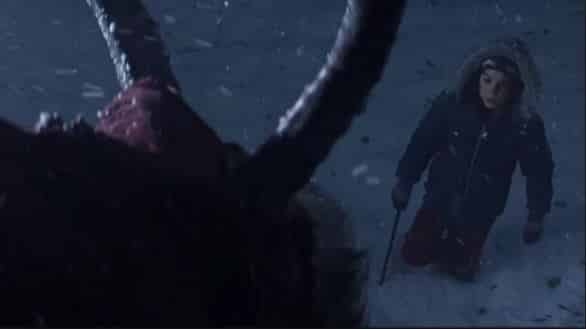 Fans of Michael Dougherty’s previous work (Trick r Treat) have been eagerly awaiting the arrival of Krampus hoping to get a modern day festive classic, however it’s with a heavy heart that I’m writing this review to report that we have nothing but a cold turkey on our hands. Krampus is a horror-comedy that is unfortunately neither horrifying or comedic. Although the movie has noble intentions the plot simply isn’t strong enough to sustain its running time and ultimately ends up becoming a chore to watch.

One of the main issues with Krampus is the script. It’s tonally lost within itself as to what movie it wants to be. It flirts with horror without being horrific, it flirts with comedy without being comedic, it flirts with fantasy without being fantastical and it also flirts at being kid friendly without being suitable for kids. Throughout its entirety I was confused as to who the audience were meant to be. One of the most terrifying aspects of the movie was at how frightfully dull the characters were. We have the old cliche of a dysfunctional family clashing over christmas but without the hilarity. Instead the audience are just left with a bunch of caricatures for the duration who never really become likable in any shape or form.

Admittedly, there are ten minutes of fun to be had when the family are attacked by a bunch of monstrous looking toys and killer gingerbread men. It’s baffling as to why these creatures didn’t play a bigger part in the overall picture as it would have greatly improved the tone of the movie, giving it a Gremlins meets Small Soldiers feel to the whole thing. Unfortunately this wasn’t capitalised on. Credit has to be given to the set design and the clever use of practical effects which are all too rare in movies nowadays however once again these effects were rarely used throughout.

Overall Krampus felt flat, charmless and undercooked. The plot was tediously predictable and many aspects of the movie were simply not up to scratch. The satirical festive message had good intentions but just like everything else in the movie, it wasn’t effectively put into good use. The concept was promising but it’s the equivalent of waking up on Christmas morning and finding a big black lump of coal in your stocking. A bitter disappointment.