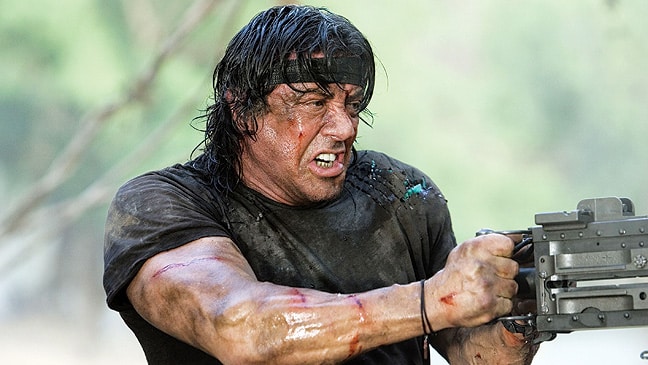 Sylvester Stallone recently brought his famous character Rocky Balboa back to the big screen in last years acclaimed film Creed, leading some to wonder if he may be inclined to bring back his other notable character John Rambo. Well a recent interview with the actor has answered that question.

In an interview with Variety, the 69 year old star revealed that he did not have any intention of reprising his role as the troubled veteran again. He explained:

“The heart’s willing, but the body says, ‘Stay home! It’s like fighters that go back for one last round and get clobbered. Leave it to someone else.”

The character was last seen in the 2008 film, Rambo, which Stallone is more than happy to leave as the characters swan-song:

“You know when you realize there’s nothing more to pull out? As an action film, I was very satisfied that it dealt with the Burmese situation. It had one foot in a current event, the longest civil war in history, 65 years at that time. It was so brutal, which civil war is, I was shocked they even gave me an R-rating. I didn’t want to compromise. I said, ‘This is probably going to be the last decent film of this genre that I’m going to do as a solo act.’ When that was accomplished, I never felt the same willingness to do it again.’ Before going on to explain ‘There’s nothing left. When they asked me to do another ‘Rambo,’ I said, ‘If I can’t do better than I did last time, and I can’t, then why?”

A few weeks back it was revealed that Fox was looking to a develop a television show based on the son of Rambo, with many people believing that Stallone would play some part in the development of the project, however in the same interview he also shot down those rumors:

“I don’t want to cast aspersions,’ the actor explained ‘but it’s delicate to try to replace a character with his son. I’ve seen the son of Flicka, the son of Tarzan, the son of King Kong, the son of Godzilla. It’s a very difficult premise.”

It sounds like he has his mind firmly made up on the matter, but of course we all thought Rocky Balboa was the last we were going of the Italian Stallion, and look how that ended.

What do you think? Are you sad we won’t be getting a Rambo 5? What’s your favorite Stallone character? Let us know below!

Continue Reading
You may also like...
Related Topics:Rambo, Sylvester Stallone