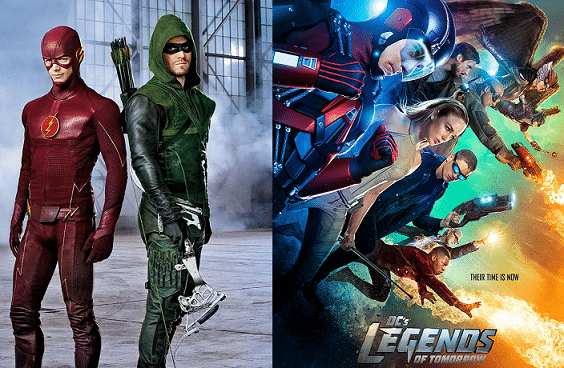 Last year’s crossover was a reminder that The Flash and Arrow share a universe. Now an annual event, this year’s told us that the universe is about to get bigger.

When Barry visited Oliver in Starling City (now called Star City), he returned to Central City as his own hero. Eventually, even two cities were too crowded. Dr. Martin Stein could forge with another meta-human to create Firestorm. So he took the show on the road. Sara Lance fought alongside Arrow as The Canary. After she was killed, her sister resurrected her with the Lazarus Pit. As the White Canary, she had to skip town as well. But eventually, Rip Hunter will recruit Firestorm, White Canary, The Atom, Hawkman, Hawkgirl, Captain Cold, and Heatwave as The Legends of Tomorrow.

Ray Palmer built a power-suit, and learned how to shrink himself. Captain Cold and Heatwave have tormented Flash since season one, but does Hunter’s knowledge of the future see them as heroes? Each member’s origins have played out in the Arrowverse. The Crossover was a chance to develop that of Hawkman and Hawkgirl.

This season of The Flash, Cisco began to date Kendra Saunders. But to his dismay, her “soul mate” was Carter Hall. No matter how much Kendra hated this Hawkman, the claim was they were destined. Reincarnating over centuries, they transferred their souls, along with their wings, to each generation. And each generation, the immortal, Vandal Savage, has killed them.

Though the main focus was the Hawks, each part had their own sub-plot. “Legends of Today,” on The Flash, Caitlin and “Harry,” worked on a serum to synthesize Flash’s speed. Like everything of Harry’s, Jay Garrick didn’t trust it. But in the end, Jay had to take the serum to save his rival. “Legends of Yesterday” brought Team Arrow over to Central City. Oliver learned he was a father. Nine years ago, his mother paid his girlfriend of the time to tell him she miscarried. While helping his allies with Vandal Savage, Ollie bumped into his ex. Surprise! She had a nine-year-old son. Still shrouded with secrets, Felicity finally had enough with Oliver.

Felicity’s rage left Green Arrow with a cloudy mind. The first go ’round, Vandal killed everyone except Flash. Good thing ol’ Barry could travel through time. The fascinating thing about time-travel stories is watching a revamped version of a previous scene. The second version of the same battle, Oliver arrived with a clearer head, and more firepower.

Hawkman and Hawkgirl eventually left town as well. But before they did, they cracked the joke that they’d become the immortals, and Vandal, the reincarnated. How little they knew the foreshadows of their words, as Malcolm Merlyn collected Vandal’s ashes. After all, the Arrowverse couldn’t leave the “Legends” without their antagonist.

What’d you think of the article? Sound off below!