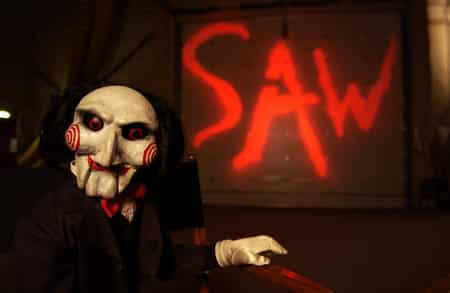 The 1980’s and 1990’s had many horror franchises to offer – Halloween, Friday The 13th, A Nightmare On Elm Street, Hellraiser, Child’s Play, and so forth.

What about the 2000’s? Not so much. The only franchise that could truly meet that level would be the Saw series which premiered in 2004. The first film was created by James Wan and Leigh Whannell. It was then followed by a sequel each year after until Saw: 3D in 2010, where the franchise was said to have ended.

But, after years of murmurs about a new movie, it appears that Lionsgate has began to officially work on a new film.

It’s apparently going to be written by the writers of Sorority Row, Piranha 3D, and Piranha 3DD and will be titled Saw: Legacy. James Wan and Leigh Whannell are slated to executive produce. Per The Tracking Board:

Lionsgate has tapped writing duo Josh Stolberg and Pete Goldfinger to pen SAW: LEGACY, sources have confirmed to The Tracking Board. The film will will serve as the eighth installment of the venerable horror franchise. Although story details are being kept tightly under wraps, original Saw director James Wan and screenwriter Leigh Whannell will serve as executive producers on the project.

Hopefully it does justice to the creative concepts of the original and brings us back to that claustrophobic world of what it truly means to be alive.

What do you think of this news? Are you excited for another SAW film? Tell us all of your thoughts in the comment section below!