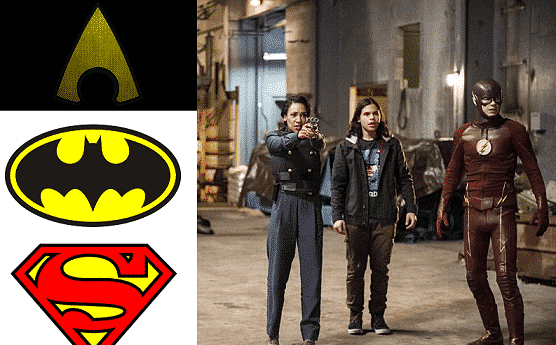 In Episode 213 of The Flash, “Welcome to Earth-2,” Barry, Cisco, and Harry traveled to Harry’s home-world to save his daughter (Jesse Quick) from Zoom. We got a good look at Killer Frost, Deathstorm, and Reverb (as well as Deadshot’s doppelganger). But the episode hinted at much bigger characters.

Through the breach were quick glimpses of several people (Gorilla Grodd, John Wesley Shipp’s Flash, etc). One of them was Melissa Benoist’s Supergirl. It has been announced that Grant Gustin will make a special appearance on the CBS show as the Flash. While the episode will be called “Worlds Finest,” there is good reason to believe that National City is set in a different world than Central City, and the rest of Earth One. Could it be that Kara Danvers lives on Earth 2?

Season two introduced us to Jay Garrick, the Flash of Earth 2. After Caitlin’s husband, Ronnie (Dr. Stein’s first Firestorm-mate) had died, she found love again with Jay. While on a date, he told her that the Atlantis of his world never sank, and that one of his best friends was from there. In this episode, Barry talked to his mother, who never died in the parallel world. She mentioned Atlantis again when she thanked Barry for the plane tickets.

While these were obvious nods to Aquaman, the speed dial on Barry’s phone spelled out two other Justice Leaguers. Just below “Mom and Dad” and “Eddie” (whom I assume is Eddie Thawne), read “Bruce” and “Clark.”

Though off-screen, Superman has a presence on Supergirl. Martian Manhunter and Red Tornado are also on the show. If Supergirl is indeed on Earth-2, could the Justice League also live there?

What do you think of this theory? Sound off below! And be sure to like us on Facebook here!

Is SWORDFISH Secretly A MARVEL Film?
Could Scott Eastwood Be THE UNKNOWN SOLDIER In Suicide Squad?
Advertisement
Advertisement
To Top