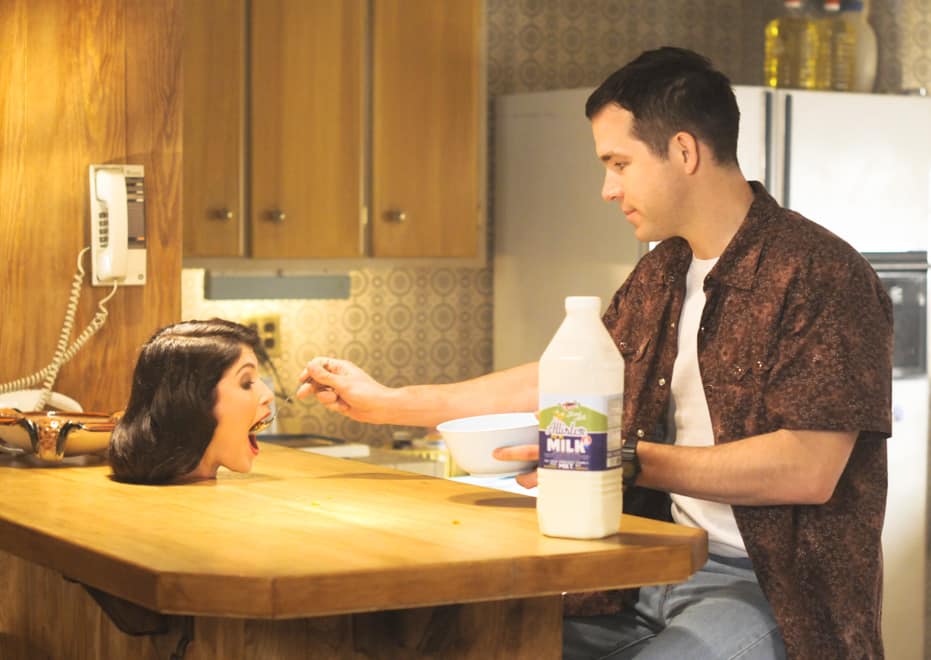 This review was written before the release of DEADPOOL.

Now before you scuff and exit this site, let’s get a few things over with. Yes, we all know Green Latern, R.I.P.D and anything big budget with Ryan Reynolds was shit. But hold on, this is pretty good.

The film tells the story of Jerry Hickfang (Reynolds), an upbeat yet shy man who suffers from hallucinations in his everyday life. When the film starts out, you get a strong feel of a John Waters inspiration; bright colors with everyone having a hokey suburban Maryland attitude. I mean come on, the employee coveralls at the warehouse where Jerry works in are bright pink. So as the story progress , you find out that Jerry hears voices from his pets, the dog; Bosco and the cat; Mr. Whiskers. Hokey attitude, upbeat lead character, animals talking; shit you might have just walked into a Disney movie by accident…no. This movie takes that wholesome idea and flips it to a comedic twist with a bit of real world problems on the state of mental health.

Jerry has a crush on Fiona, the hot British chick from accounting played by Gemma Arterton.  But Jerry is seen around the company as a “weirdo’. When circumstances lead to Fiona and Gemma taking a drive for a midnight snack, sparks begin fly for a possible romance between the two…until the deer comes into play.  Now before we touch up on the deer, Jerry saw Fiona’s beauty as angelica. Jerry in his way, try to compliment Fiona with a cutesy biblical joke but only comes off as weird to her. Enter the deer wondering in the middle of the road and meeting with the front end of Jerry’s speeding truck. This is when the movie gets dark and only gets darker.

Jerry does a mercy kill for the deer, Fiona freaks out and a somewhat parody of a classic slasher flick chases ensues. A struggle for solidarity between the two occurs and “oops” Fiona ends up stabbed. What is Jerry to do? Mercy kill.

This is where “The Voices” from Bosco and Mr. Whisker (both voiced by Reynolds himself) come into play. The personalities of the pets give us conformation what we all believed. Dogs are loyal and cats are dicks. The pets serve as the comedic voice of reasons and in some way, maybe the inner desires of Jerry. Side note: Depending on what kind of person you are, you’ll decide which animal to agree with; which I would think, was the director or the writer’s intention. If it was by a happy accident, 10 points on that one.

Now you might be wondering, “isn’t he seeking help?’Jacki Weaver plays Jerry’s therapist but it seems the message the director might be saying is that a therapist can only do so much for their patients. The extent of the therapist help goes as far as, “are you taking the meds” along with “you should take them if you want stay better”. Reynolds…look I get it. He’s handsome, charming and some might think he shouldn’t be in the role of a serial killer. But if you really think about it, those are some of the traits of a serial killer. But not in a Charles Mason way. You actually become more sympathetic towards the character and the misfortune he has endured because of his and his family’s history of mental disorder. Without the anti-psychotics, Jerry life is full of color and joy. This masks the severity and depressive realization of his life. The way he was living; I wouldn’t want to take them either. But enough of all the serious shit, let’s get back to the comedy.

There are a few chuckles that happen in the course of this film. Jerry’s delusion is at its strongest when his victims begin to talk to him after having their heads loped off and stored in the freezer. Once Fiona is killed, her severed head demands a friend or friends to keep her company. Enter Lisa, her co-worker played by Anna Kendrick and Alison played by Ella Smith. Anna Kendrick does her cuties typical self but it works for this type of film. Ella is more of a background character but is more cautious of Jerry than Lisa, who is actually “Ga Ga” for Jerry and thinks he just needs to be given a chance. Poor, poor Lisa.

On the technical side, no crazy or amazing shots that will stick with you after the credits roll. The first kill scene has a great touch of the night/fogy/creepy classic murderer in the wood look and feel to it.  It does have a low budget vibe to it but it fits for this story.  The time setting feels mid to late 90s but that might just be the Northeast of America location. To further give evidence that maybe the director or writer is a John Waters fan is the end leading up to the credits. Without giving too much away I’ll just give you two words: musical number. Not too extravagant but it goes into the realm of “What the f*ck”.

So if you want to explore the realm of dark comedy with drama and a decent cast with a bit of acting that doesn’t feel like the cast did it just for a paycheck, jump on in. Reynolds, like in the film The Nines, is good when he’s given a decent script with room to experiment. You probably won’t race to your Redbox or VOD, but if this pops on your radar and want to shed a little over an hour and a half of your time give it shot.