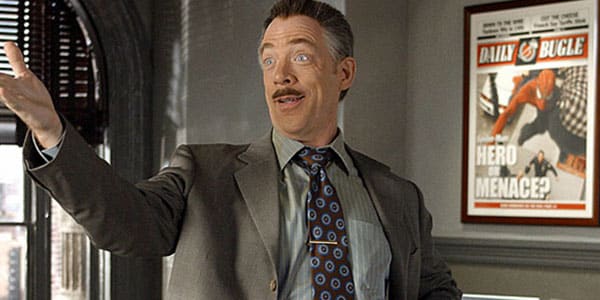 Fans recently launched a petition for J.K. Simmons to return as J. Jonah Jameson for the Spider-Man reboot – which isn’t really a bad idea considering how well he played the character. However, Marvel seems to like to re-cast their characters for the MCU and it would probably confuse most people to see an actor from un-connected films.

Some people aren’t too fond of Raimi’s Original Spider-Man Trilogy, others, like me, love it in spite of its flaws (in particular the first and second installments); however, the general consensus on Joseph Jonah Jameson’s character in those films seems to be that he was both perfectly cast and perfectly written.

Academy Award-Winner J.K. Simmons (Whiplash, Oz, Juno) has expressed his appreciation for the part, playing him on various cartoons/videogames/etc., and has openly stated he would like to reprise his role, and we know Marvel Studios (for good and for bad) listens to their fans pretty often, so I’m pretty sure if we can get them to notice this, they might at least have him cameo.

Some audiences may get confused on this, but most people are already aware that it’s a reboot, so I think it’s a risk worth taking (again, something the MCU is known for).

GIVE US YOUR VOTE!

The petition managed to catch the attention of the actor and here’s what he had to say about it:

“That petition does not come from anybody that is actually in a position to do anything about it.”

That doesn’t sound too positive but he didn’t rule out a possibility:

“Being in those movies with Sam [Raimi] was one of the great joys of my career. It was a super fun character so I’ll never close the door on anything.”

If you’re interested in signing the petition, you can do so by visiting the link above.