Batman Solo Film To Feature UNDER THE RED HOOD Storyline? 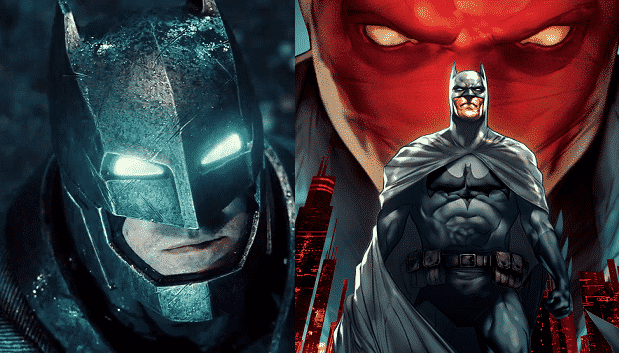 Entertainment Weekly’s recent feature on the upcoming Batman v Superman: Dawn of Justice gives us clues on what’s to come in this DC Extended Universe.  We know that the next two flicks will be Suicide Squad and Wonder Woman. We also can expect a two-part Justice League, much like how Marvel is doing with the third Avengers picture. Also, there will be solo outings for Flash, Cyborg, Shazam, and not one Green Lantern, but the whole Corps. But so far, there hasn’t been any slates for another Superman, or a solo Batman starring, and maybe even directed by, Ben Affleck.

With so many Batman movies under their belt, one can only guess what Warner Brothers will throw at us next. Will they recycle villains we already saw? Jared Leto will play the Joker in Suicide Squad. But will he fight Affleck’s Batman somewhere down the line? Gotham is also giving us different versions of Bat-Villians, such as Corey Michael Smith’s take on the baddie that Jim Carrey placed in our hearts. While Arnold Schwarzenegger’s Mr. Freeze wasn’t a hit, the TV show is giving him a second shot, played by Nathan Darrow. Gotham also gave us our first live-action Hugo Strange with B.D. Wong (Jurassic Park, Jurassic World, Law and Order: Special Victims Unit).

Though we would like to see the mythos revamped in this new cinematic connected universe, there are still guys out there who haven’t seen their limelight. Could we see Hush, Clayface, or Mad Hatter?

One particular villain has his groundwork already laid out in Batman v Superman. In the trailers you can see Bruce Wayne brooding over a Robin suit, with the words, “Hahaha Jokes on you Batman,” spray-painted all over it. One can only assume that those were The Joker’s words. In the comic arc, “Death in the Family,” The Joker killed Jason Todd, the second Robin. While the assumption is that the Batfleck flick will be a prequel, focusing on the story line, a plot based on “Under the Hood” would be more likely.

“You can extrapolate that if Batman kept his suit like that, it’s a reminder. He’s displayed the suit of a fallen ally, fallen friend in the center of the Batcave. It’s right there for a reason, and part of it is to fuel him to continue to do what he does,” DC Comics Chief Creative Officer, Geoff Johns told EW.

While the death of Robin will be used as a motive against Superman, it would be logical to continue the mystery of what happened. But not in a prequel, which would only chronicle “Death in the Family,” but a sequel that would flashback before the events of BvS, and continue with Robin’s resurrection as Red Hood.

That would, of course, only be if the Robin who died was Jason Todd, whom was the only one who died in the comics. Dick Grayson, the first Robin, became Nightwing, and Tim Drake, the third Robin after Todd, moved on to become Red Robin. There were also other Robins, such as Bruce’s son, Damien, and two female Robins: Carrie Kelley, in the non-canon, Dark Knight Returns by Frank Miller, and Stephanie Brown. There is also the recent title, We Are Robin, which features many kids dressing up as the Boy Wonder.

“No one says specifically the name of which Robin that is,”  said Johns.

A villain in the form of an old friend would bring much emotion that Affleck is perfectly capable of portraying. Many dismiss him, calling back to the last time he laced up some tights. But has anyone seen Chasing Amy?

As far as when we’ll see this solo Batman movie, that is still up in the air:

“It’s in development, and right now I’m really focused on finishing Live By Night,” said Affleck. “That’s where my focus is, and I tend to be a one movie at a time guy. So, when I’m finished with this movie, I’ll then focus on my next movie and figure out what that will be…….You should keep your eyes peeled for sure.”

The idea of leaving no stone un-turned is a major tool in this new cineverse concept. Therefore, “Under the Red Hood,” is very likely. For other options on this Batman solo flick, read my list on the matter. If I missed any, or have any thoughts on this news, let me know in the comments below. And remember, no matter who you choose, Batman or Superman, Captain America or Iron Man, there are no wrong answers.

Be sure to watch Batman v Superman: Dawn of Justice when it hits theaters, March 25th.