Who Is ADAM WARLOCK? 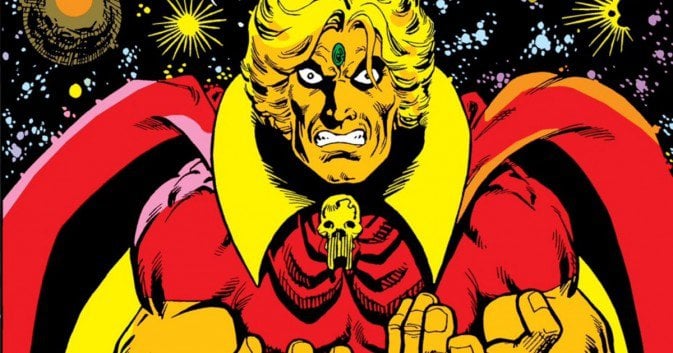 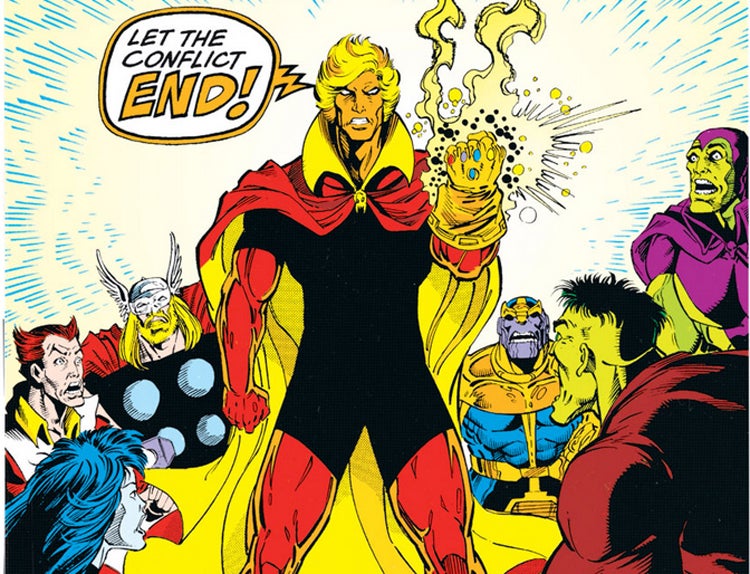 Powers: “Body can trap cosmic energy which enhances his strength, endurance, and healing powers; also uses this energy to reduce gravity enabling him to fly; projects energy blasts from his hands.”

Created by: (as Him) Stan Lee, Jack Kirby

I remember Adam Warlock from the short-lived Silver Surfer animated series on Fox Kids. I caught it in my childhood, but when I re-watched it on Netflix, I noticed a lot of characters that I was familiar with: Thanos, Beta Ray Bill, Galactus. And I learned about new ones: Drax the Destroyer, Pip the Troll.

With the recent rumor that Kurt Russell’s role in Guardian’s of the Galaxy Volume 2 will be Adam Warlock, I decided to look into the guy. Many of you said he was too old for the part. Evidently, he was designed to be the perfect human, which I guess is young.

So who is this cosmic, gold-skinned specimen? According to the Marvel Encyclopedia, “Adam Warlock was the genetic creation of a maverick group of scientists known as the Enclave. He was a prototype for what they hoped would be an invincible army, with which they planned to conquer the world. While forming in his cocoon, Warlock overheard his creator’s plans. When he hatched, he rebelled against them, destroyed their base, and used his cosmic power to take off into space.” 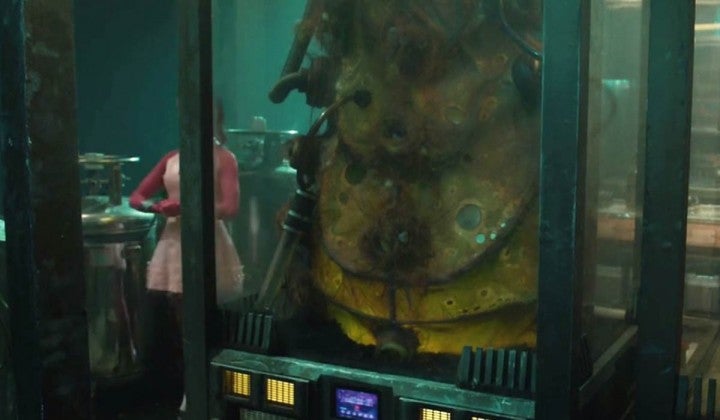 Gunn discussed the Easter Eggs of The Collector’s collection in a podcast with Empire magazine, “Well many people may look up to the right of The Collector as we first see him, and you will see a certain duck named Howard that turns to look at the group. That’s one of my favorite little things in the background. There are the slither creatures from my movie Slither behind The Collector, those guys are pretty obvious. You have Adam Warlock’s cocoon, you have all sorts of other characters from Marvel movies.”

Knowing Marvel has a plan for everything, we’ve patiently waited for that cocoon to hatch.

With Warlock, Avengers: Infinity War would closely resemble it’s apparent source material, as he is quite crucial to the Infinity Stones. “The High Evolutionary gave Warlock the Soul Gem, which could draw souls into another dimension…Warlock subsequently battled Thanos, who mortally wounded him. Warlock’s soul retreated into the Soul Gem, where it lived peacefully for many years until he emerged to battle Thanos once more to keep him from the Infinity Gauntlet.”

Aimed for a younger audience, The Super Hero Squad Show used the story line of Warlock trapped in the Soul Gem in Thanos’s Infinity Gauntlet. I would like to see Warlock’s introduction emerging from the Soul Gem. So far, nobody has found it yet in the movies. Though I heard Heimdall might have it. “In his travels, Warlock encountered The Magus, the power-crazed leader of the Universal Church of Truth, an armed militia trying to spread their religious empire throughout the universe…..To his horror, Warlock discovered that the Magus was actually an alternate future version of himself.”

“(Kurt) Russell has been tapped to play the legendary hero, Adam Warlock, and his evil twin, Magus,” read the insider source that revealed the rumor. If Russell is to play Warlock, then he’s playing Magus as well. Most superheroes require a dual role anyway: Peter Parker’s awkwardness and Spider-Man’s trash-talking, Bruce Wayne’s billionaire playboy and Batman’s brooding bad-ass. Though some actors have fallen short, playing the two personalities the same (Andrew Garfield, Christian Bale). While some gave us Oscar-worthy performances displaying an array of personalities (Michael Keaton). Just because Warlock and Magus are two different characters doesn’t mean this performance would be any different.

The Other Warlock and Magus

Xaivier’s next generation of students were called The New Mutants. Fox plans on doing a movie soon to add to their X-Verse, which includes the recent Deadpool, and the upcoming X-Men: Apocalypse. Cable came along and turned the New Mutants into X-Force. One member, named Warlock, was not really a mutant but part of a “techno-organic” alien race.

The Magus was the evil leader of this race. “Each child of the Magus must face him in battle to the death, before they reach adulthood. One of his sons, Warlock, fled to avoid combat and joined the New Mutants on Earth. The Magus came to Earth to search for Warlock……unless Warlock was returned to him, he would cause great destruction on Earth…..another, unrelated Magus was an evil version of Adam Warlock, from the future of Earth-7528.”

Earth scientists went further and took this Technarchy race, mixed them with Sentinels, and created The Phalanx — pretty much the future Sentinels in X-Men: Days of Future Past. 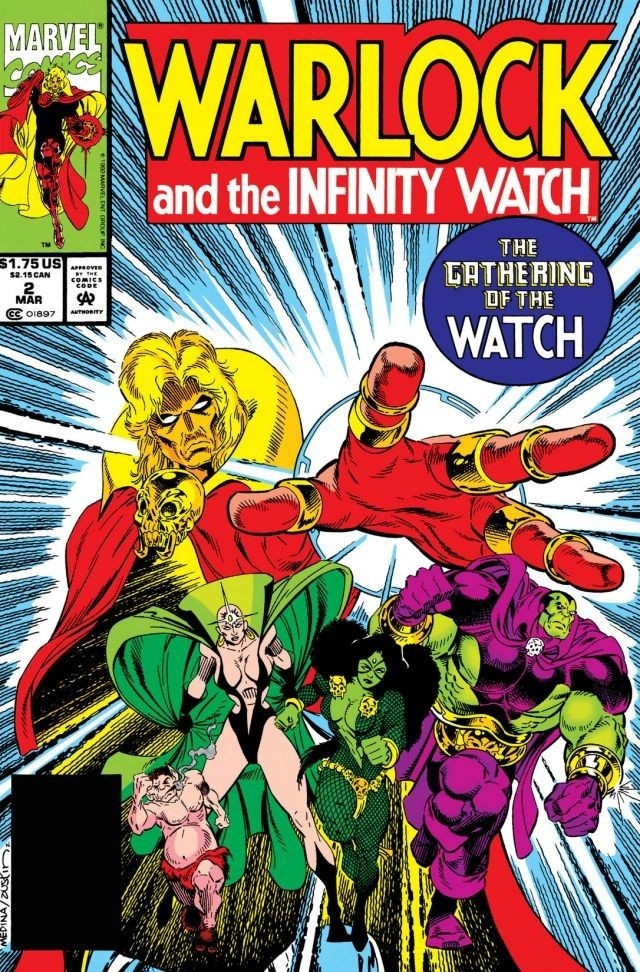 “Warlock formed a group called the Infinity Watch to keep the Infinity Gems safe.” Some of the members of Warlock’s team are already in the MCU. To stop Thanos, the Avengers will have to pull in a lot of help. Certainly, the Guardians will show. And it has been reported that the Part 3 will include 67 different characters. Russell would play up the captain role well. If assembled. his crew would include:

The rumor of Kurt Russell playing Adam Warlock has yet to be confirmed. But if the character does appear, we will be closer to unlocking the Infinity Gauntlet. Many mysteries surround Guardians of the Galaxy Volume 2, such as: who will Sylvester Stallone be playing? Those mysteries will be solved next year, when it hits theaters. But I’m sure more will arise to be solved in Avengers: Infinity War – Part I in 2018, and Avengers: Infinity War – Part II in 2019. Some of the clues for GOTG2 might even appear in Doctor Strange, later this year on November 4th.