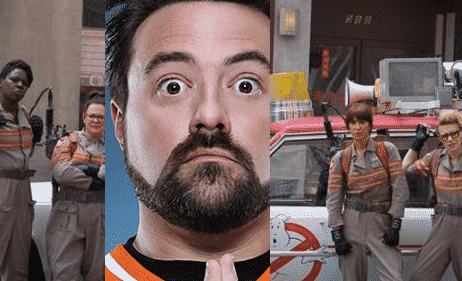 The new Ghostbusters film has divided the fans quite a bit, you either love it or hate it, and the trailer has seemed to get the same type of attention. Most recently, Kevin Smith announced his thoughts on the trailer for Hollywood Babble-On with Ralph Garman. And he’s made it particularly clear that he has no issues with the female cast and that he’s still open to the film:

“It could’ve been all men with the same jokes, and it still would have duded. The trailer’s not strong, and that doesn’t mean the movie’s gonna blow, like again the f****** pedigree of this movie is undeniable. There’s no way all these people involved don’t make a f****** funny, at least watchable fun movie.”

Fans of the original Ghostbusters film have been harder on the film than Smith, so it’ll be interesting to see how the movie does at the Box Office when it’s released.

You can listen to the rest of the rant here:

Are you excited for the upcoming Ghostbusters remake? Do you agree with what Kevin Smith had to say about the trailer? Be sure to tell us your thoughts in the comments!

Continue Reading
You may also like...
Related Topics:Ghostbusters, Kevin Smith