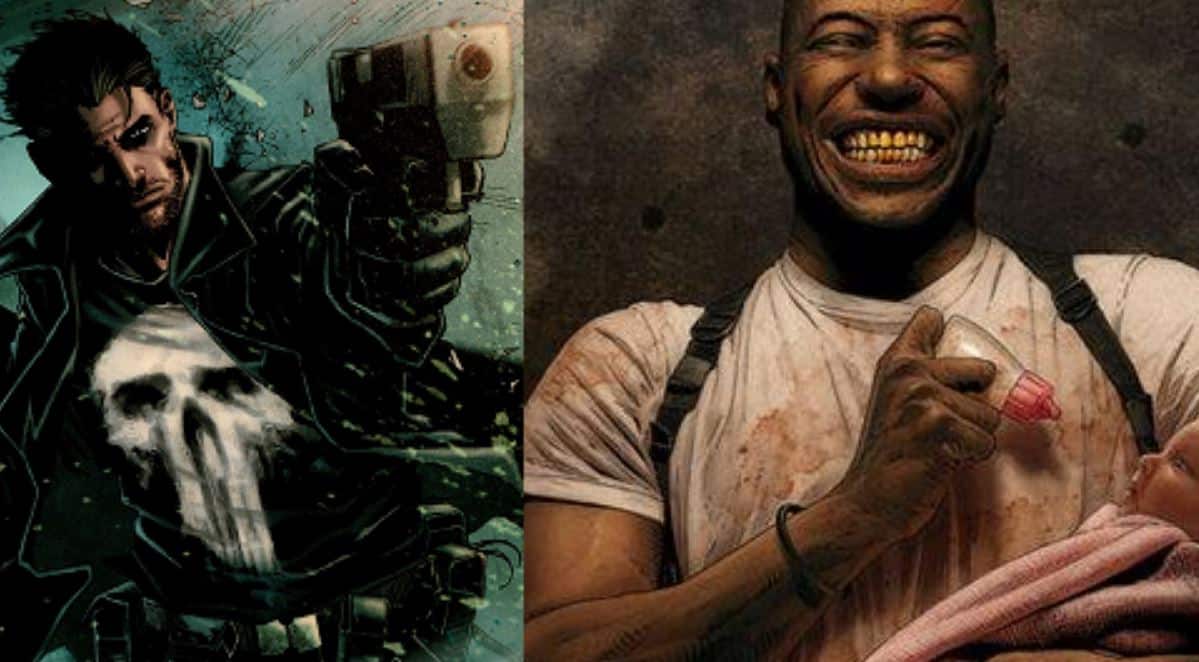 Frank Castle has been shooting, stabbing and exploding his way through comics for the last 42 years. And It’s been a rough old ride for Marvel’s most notorious vigilante.

He’s died. More than once. He’s been an Angel. A Monster. For a short time he was quite randomly turned into an African American. He’s saved the world. He’s destroyed it. Even by Marvel standards he’s had more than his fair share of things to deal with.

Chief amongst these have been the bad guys. And there have been a lot of them. Frank’s policy in relation to villainy is pretty simple. He’s spent pretty much every waking day since his comic book debut in 1974 killing them. With varying degrees of permanence. Because it’s surprisingly hard to die and stay dead in Marvel comics. There are just so many damn ways to come back.

As a result of this, despite the large amount of items and methods at his disposal to get rid of the bad guys, there are some that Frank has had to go up against again and again. So who have been the Punisher’s most persistent and dangerous opponents? Let’s have a look…

The first entry in the list may come as a bit of a surprise to some readers, but across every platform that The Punisher exists on, the top brass have tried to take him out in order to hide their filthy secrets.

Be it covering up new and underhand efforts to make super-soldiers. Their involvement in the illegal drugs trade. Or simply to cover up their own murderous efforts, Frank has regularly had to find himself fighting for his life against his own comrades in arms, whilst trying to get to the poisoned heart of the US military.

The legendary matriarch of the notorious Gnucci crime syndicate, Ma didn’t take kindly to The Punisher’s crusade to eradicate her family from the bottom upwards. This resulted in a series of retaliatory strikes against her opponent , that grew in intensity as Frank coolly despatched everything she threw at him.

When bribing the police, hiring a trio of hitmen, and deploying her entire organisation all failed, Ma’s decision to hire legendary hitman The Russian was her final undoing. A home visit from Frank ended with the screeching crone dying in a flaming inferno. This wasn’t the end of her, as she seemingly returned a short time later, before her apparent return was unmasked as another of Frank’s enemies pretending she was alive to provoke him into making a mistake. 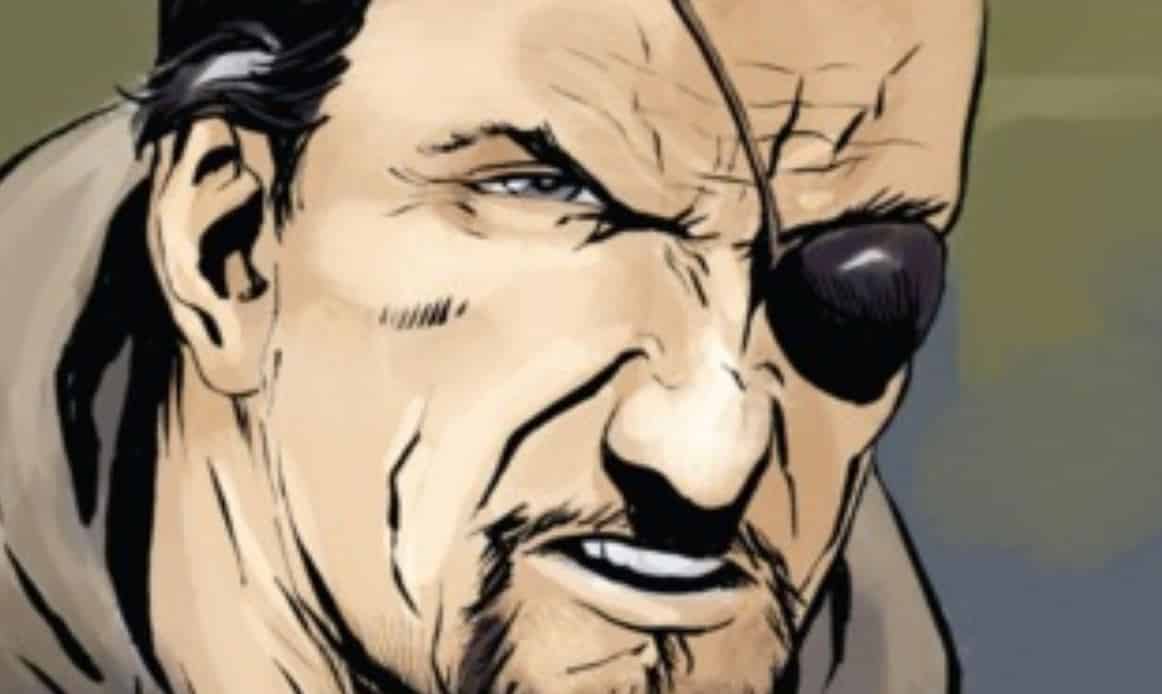 A CIA lapdog, this twisted double agent was involved in a series of actions against The Punisher throughout the MAX series. Rawlins worked behind the scenes with a number of organisations that Castle went up against, and had a personal relationship with fellow villain Nicky Cavella, manipulating the hapless gangster for his own ends.

After repeated failures, Rawlins incurred the wrath of the US Security agencies, so instead sold his soul to the Russians, informing them of Frank’s past efforts against them in an effort to curry their favour and gain protection. With yet another failed scheme behind him, the scheming scumbag eventually died in an airport toilet, unable to flee his longtime opponent. 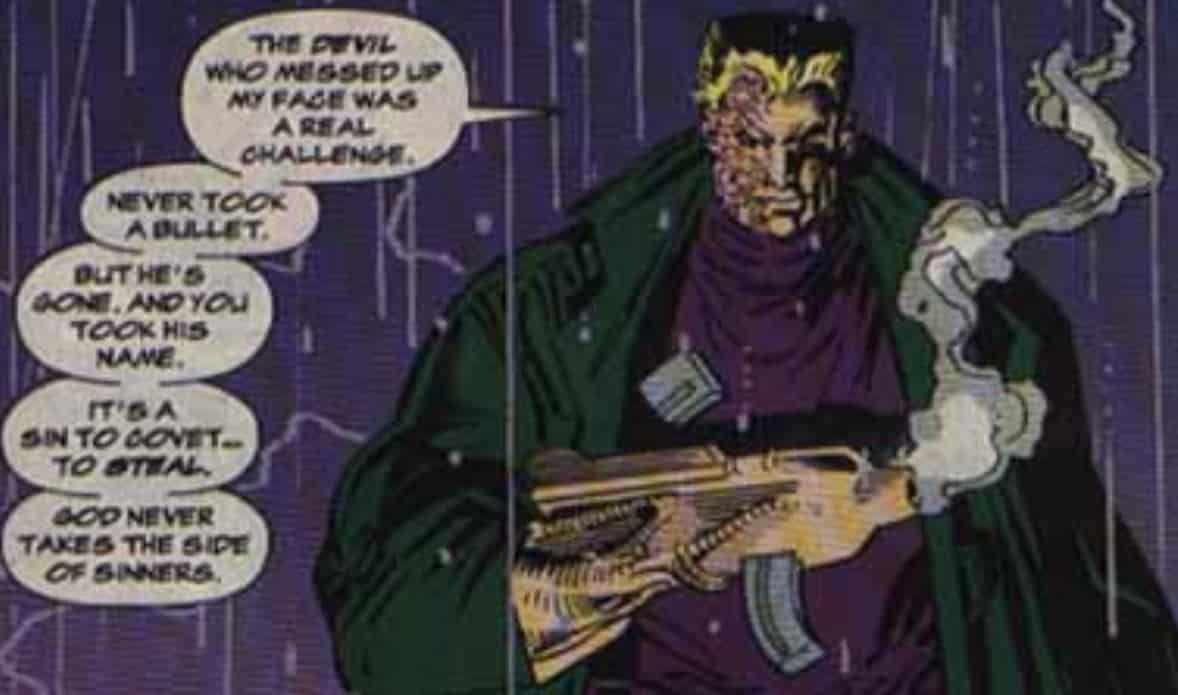 A former priest turned shady government operative, this unhinged killer has been somewhat a persistent thorn in the Punisher’s side. Outfitted with a bionic arm that can convert to a number of different types of firearm the range of weaponry available to him makes him every bit as formidable as his legendary opponent.

The most memorable meeting between the two was frustrated by the inclusion of Daredevil, who was trying to keep casualties down to a minimum, which is hard when one of the protagonists is the Punisher; and the other is a psycho with a flamethrower. Bushwacker is a classic Marvel villain, that unfortunately no prison, no beating or even a death will prevent from cropping up again:

Cavella is one of the worst kinds of comic book psychopath, the one without an obvious reason. No utterly tragic accident or disfigurement. No horrendous backstory. No accidental mutation. He’s just a nasty piece of shit who turned bad at an early age, and then inadvertently benefitted from Frank’s thinning of the Mafia ranks.

Originally called in by the mob to try and stem the wounds inflicted by The Punisher, Nicky’s cavalier attitude towards the problem cost him his two most trusted lieutenants, and most of the remaining Mafia crews.

Undeterred, and short of other options, the families unwisely turned once again to Cavella, who thought that the desecration of the Castle families graves might provoke a response. And it did, a long walk out into the woods, and a bullet in the gut. 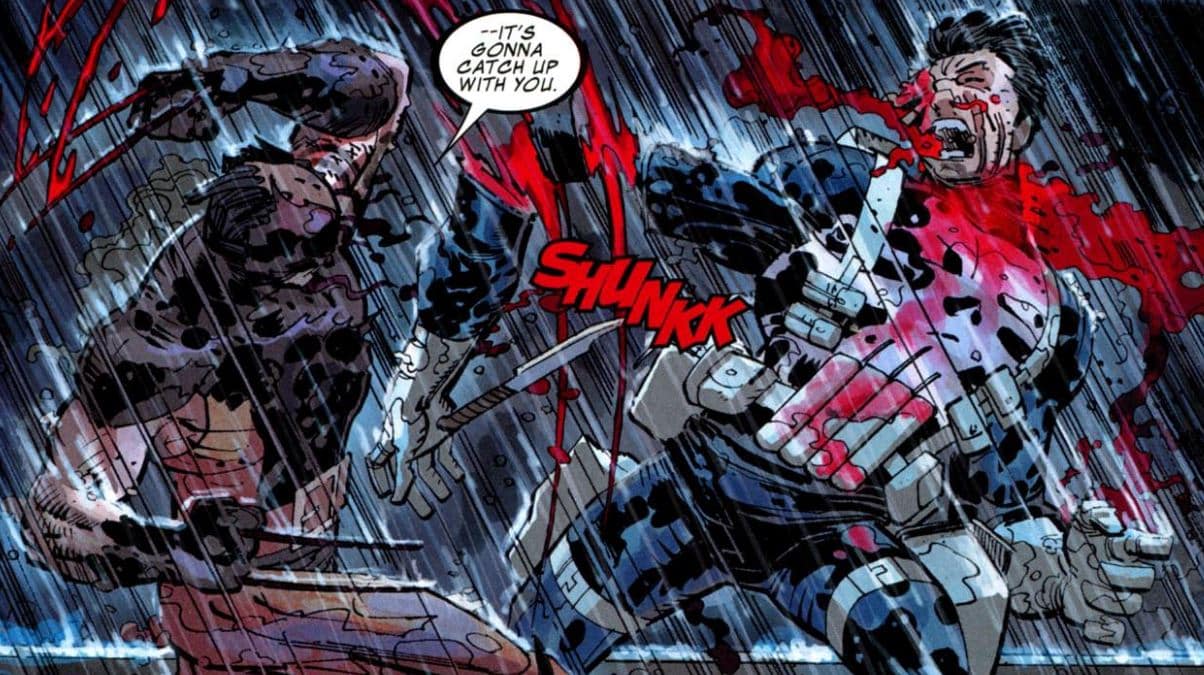 It’s a small list of bad guys who have managed to defeat Marvel’s most notorious vigilante, but Wolverine’s bastard offspring managed it. Not that Frank made it easy. Having survived the might of Norman Osborn’s private army, he managed to shred the lethal mutant to pieces in the sewers, before meeting his end in exactly the same way.

But death was no barrier, and the two then clashed again in Tokyo, when Frank returned from the dead. His mind corrupted, the Punisher’s battle with this mocking enemy caused widespread destruction, until Wolverine himself stepped in to break up to two. 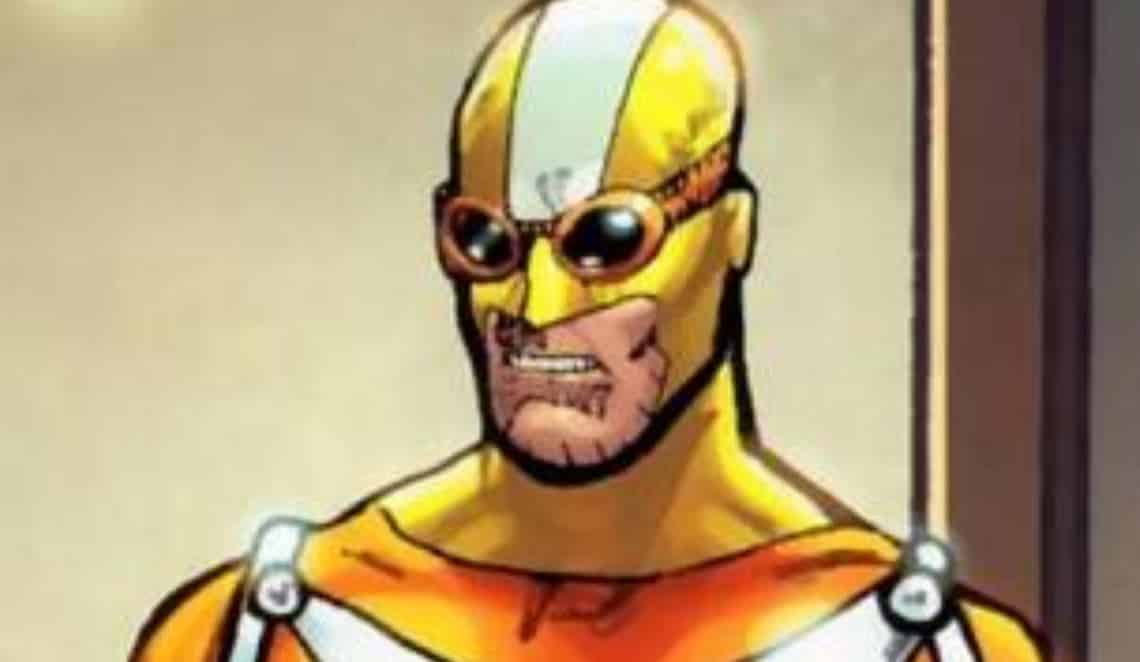 Onetime Punisher ally Stuart Clarke is a sad chapter in the vigilante’s story. Whilst admittedly never having been playing with a full deck, he initially was a quite endearing and helpful soul, assisting Castle with technical support and fantastic weaponry. But the discovery that Frank had been inadvertently responsible for the death of his lover pushed Clarke into the depths of madness.

The two initially clashed amidst the madness of the Skrull invasion, with Frank vengefully scarring the psychotic Clarke. This resulted in a further clash between the two when the hapless villain teamed up with Jigsaw, only to perish in a fiery inferno during a battle on the rooftops of a burning building. 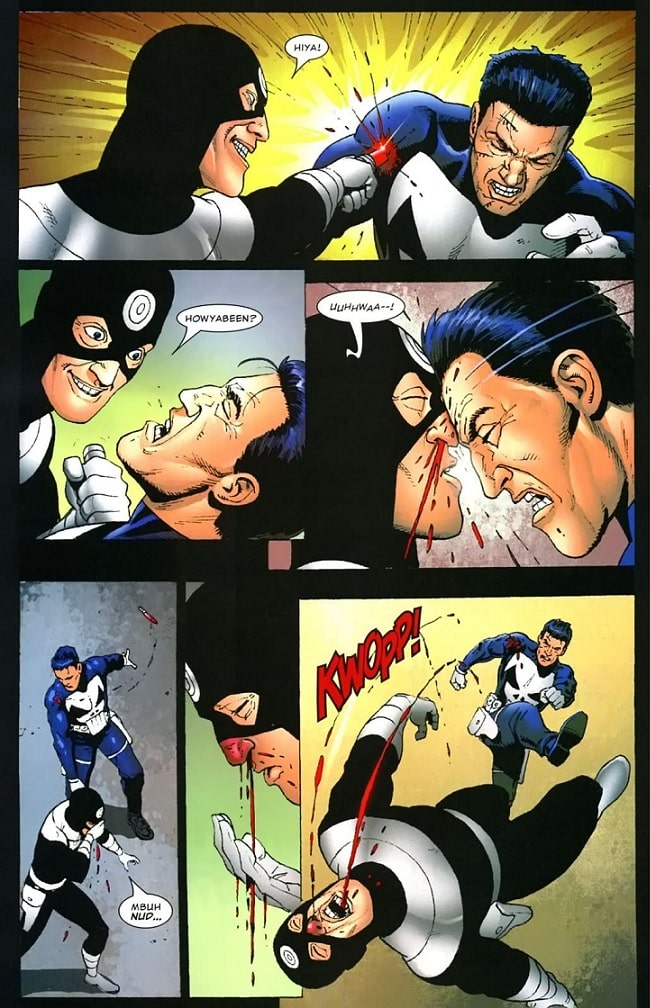 Whilst the mysterious Bullseye has clashed with most of the heroes of the Marvel world at one time or another, he does seem to have more than his fair share of one-to-ones with The Punisher.

Employing a variety of bladed items to combat Frank’s impressive arsenal of weaponry, the two are well matched, both causing as much damage as the other. Their clash in the MAX imprint was particularly memorable, as Bullseye’s obsession with the Vigilante led to him trying to live his opponents life in a means of psychologically outfoxing him. Which ended badly….

Most memorably portrayed by Kevin Nash in the 2004 Thomas Jane movie, this brawny, but not so brainy assassin is one of Frank’s more memorable opponents.

Seemingly impervious to pain, and bullets, The Russian just keeps on coming, and also quite randomly decides to transition across to being a woman in-between battles. He’s cropped up across all the platforms The Pubisher inhabits, with his gormless smile and bulging biceps. The apartment battle employed in the Xbox video game is a particularly enjoyable incarnation of the character. 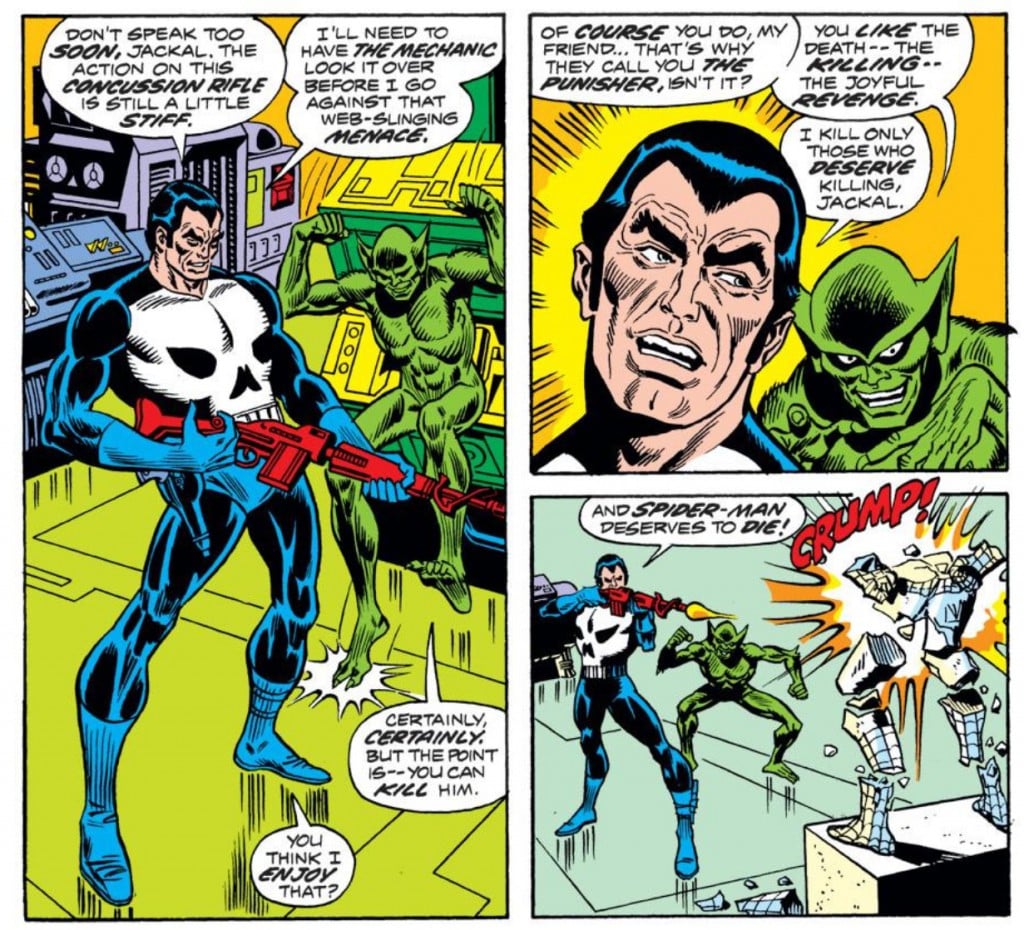 A long time and infamous enemy of Spider-Man, this criminally scientific mastermind was responsible for the birth of The Punisher in the Marvel Universe, manipulating the anti-hero into thinking Spidey was a villain. He would go on to survive Frank Castle’s retribution and the two would be destined to meet again.

Having restyled himself as ‘The Professor’, Miles Warren continued to pull the strings behind New York’s comical elements, eventually coming to control Hammerhead’s organisation. More attempts to take on The Punisher using Bushwhacker set the two on a collision course, with the evil genius eventfully deciding that Prison was the safest place for him having provoked his old enemy one too many times.

Introduced in the MAX imprint, this gigantic former marine turned gangster immediately became a firm favourite with the fans, managing to crop up in other incarnations, and also being rewarded with his own series.

Adopting entirely the same attitude to problem-solving that Frank does, ‘Cuda makes the best use of whatever comes to hand to smash, crush or break anyone who dares to oppose him. Seemingly indestructible, he finally came to a bloody end after kidnapping Frank’s daughter and holding her hostage. 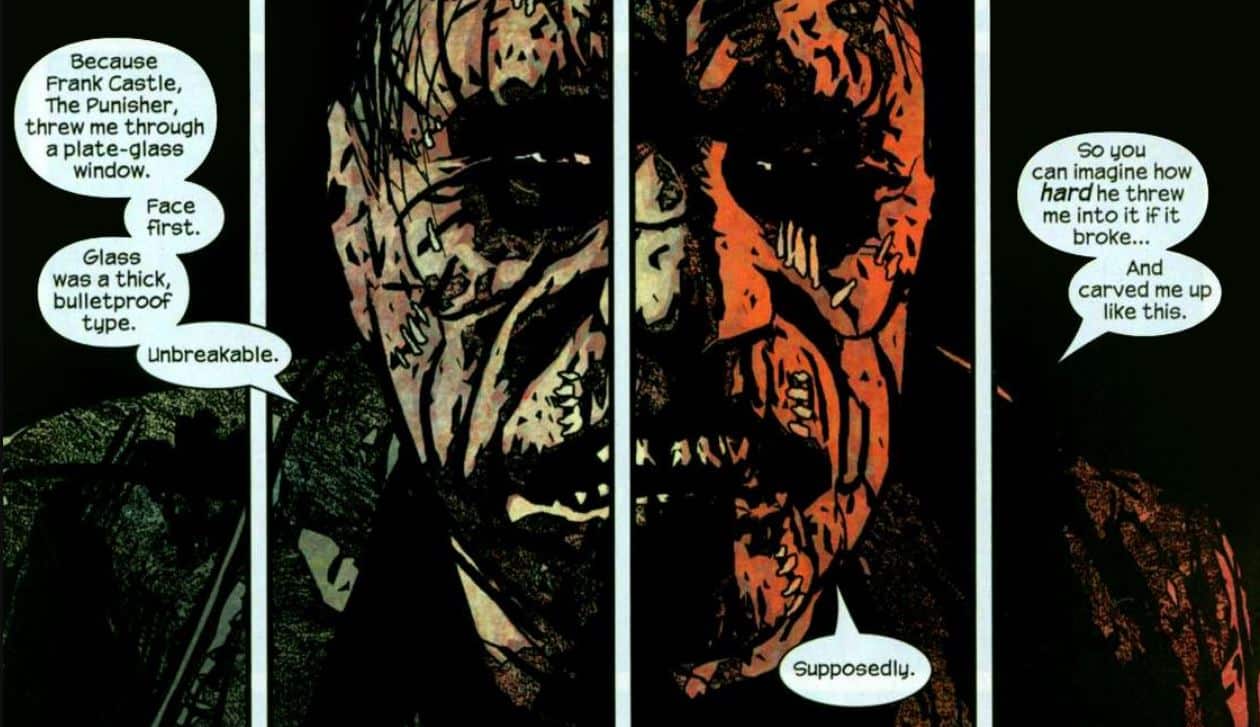 You guessed it, sat at the top of the tree is Jigsaw. The leering Joker to Frank’s Batman. Physically and mentally scarred beyond repair by The Punisher’s hand, and utterly devoted to trying to gain revenge on the man responsible for his hideous features.

And the mental scars run deep. Jigsaw has, in repeated occasions, become so obsessed with his opponent that he’s come to impersonate and even believe he is The Punisher himself. He’s sliced and stabbed his way through uncountable innocents to try and get back at Frank, tirelessly thinking up schemes and plans that involve throwing damaged and twisted people Into The Punisher’s path.

No matter how many times he’s destroyed, he keeps coming back. The hate burning inside him keeping him from the grave. The two are destined to fight each other, until one day dying together, both having achieved their goal.