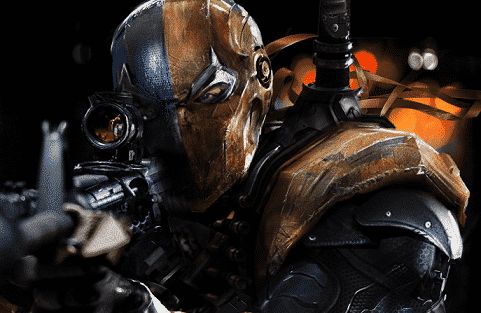 As most of you already probably know, DC Comics Rebirth initiative starts this month and Aco (a member of the art team) went to Facebook to share concept art for the new series – which included Deathstroke‘s brand new look.

The Deathstroke pictures have since been deleted.

Deathstroke, or commonly referred to as Deathstroke the Terminator or simply Slade, is known to be the greatest assassin in all of DC Comics. He has encountered Batman on several occasions. He has fought against Nightwing, Cyborg, Raven, Starfire and Beast Boy during his tenure on the Teen Titans, and has battled him occasionally in his own solo series, to the point he is considered a member of Nightwing’s Rogues Gallery instead of Batman’s. He is also the father of Ravager (Rose Wilson).

The DC Rebirth is described as:

DC Rebirth is a massive DC Universe initiative published in 2016. The event follows the ending of The New 52, a publishing era that rebooted DC continuity in 2011 after the Flashpoint crossover. Its name is taken from the earlier series’ Green Lantern: Rebirth and The Flash: Rebirth, both written by Geoff Johns and focusing on returning their characters to an earlier status quo while updating the premises for new audiences. The initiative is intended to synchronize and harmonize the Post-Flashpoint continuity and the Post-Crisis continuity.

What do you think of Deathstroke’s new look? Are you a fan of DC Rebirth? Be sure to tell us your thoughts in the comment section!

Continue Reading
You may also like...
Related Topics:DC Comics, Deathstroke