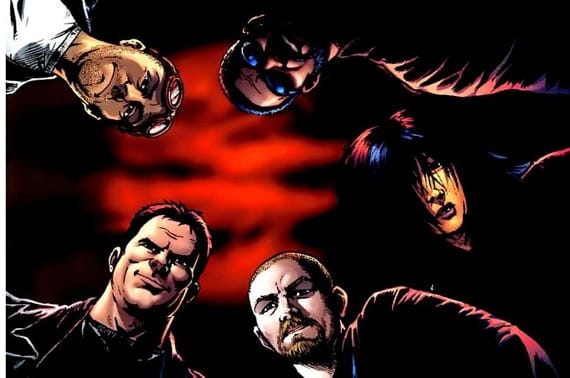 After developing Preacher for AMC, Seth Rogen, Evan Goldberg and Neal Mortiz will be taking another dark comic book series and bringing it to the screen. This time, it’ll be Garth Ennis’ The Boys comic book. It won’t be on AMC, however, it will be on Cinemax.

Per the Deadline report:

After bringing Garth ECinemaxnnis’ Preacher to the screen with the upcoming AMC series, Seth Rogen, Evan Goldberg and Neal Moritz are tackling another dark and violent comic book by Ennis on cable television. Cinemax has put in development The Boys, from the Preacher team of Rogen and Goldberg’s Point Grey, Moritz’s Original Film and Sony TV.

Developed by Rogen, Goldberg and Supernatural creator Eric Kripke, and to be written by Kripke based on the graphic novel written by Ennis and illustrated by Darick Robertson, the series is set in a time where most of the superheroes are corrupted by their celebrity status and often engage in reckless behavior, compromising the safety of the world. It centers on a CIA squad, known informally as “the boys,” whose job is to keep watch on the proliferation of superheroes and, if necessary, eliminate some of them. Rogen and Goldberg, who helmed the Preacher pilot, are set to direct.

It was rumored this past Summer that Rogen was in talks to produce the comic book adaptation and now, thanks to early buzz for Preacher, it’s going to happen. There’s no word on when the long delayed live action adaptation of the cult comic will finally come to life but we’ll be sure to keep you posted.

How do you feel about Seth Rogen adapting The Boys for television? Do you think it will be any good? Be sure to tell us all of your thoughts in the comment section!

Continue Reading
You may also like...
Related Topics:Seth Rogen, The Boys