10 Marvel Characters That Could Work On A TV Budget

In past couple of years, Marvel has firmly placed its foot in the door into the world of television. They currently have a show airing on ABC with another expected to air at the end of this year. Then of course they have their Netflix shows, with Daredevil and Jessica Jones already available for your viewing pleasure, Luke Cage joining them later this year and Iron Fist, The Defenders and The Punisher on the horizon. But despite all these opportunities, they are yet to tap into the rich vein of Marvel characters just waiting to be brought to life, many of whom may be a bit too B-List and C-List to warrant the big screen treatment. There’s a number of reasons that this could be; no room in the story, they can’t be adapted correctly or maybe the character just isn’t interesting enough. The usual answer though is budget constraints, it may be too expensive bring a character such as the Hulk to the screen for example, but not every character requires so many effects. Today we’ll take a look at some examples of characters who could be brought to life using a small screen budget, using other shows currently airing as an example. No, I’m not talking about Scott Lang and i’m definitely not talking about Hank Pym. Can you imagine how much that would cost? I’m talking about the third character to take the Ant-Man mantle, Eric O’Grady. O’Grady, AKA the Irredeemable Ant-Man isn’t a particular nice character, in fact he’s not a nice character at all, happier to use his powers to further his own needs rather than to help others. Originally an arrogant S.H.I.E.L.D agent, O’Grady stole Hank Pym’s latest Ant Man leading to him being hunted by disgruntled co-worker Mitch Carson, who appeared in 2015’s Ant-Man film. After that the character went on to become a member of The Secret Avengers, Thunderbolts and even Damage Control, who are set to receive their own show later in the year. With Ray Palmer and his A.T.O.M suit currently causing miniature mayhem on C.W’s Legends of Tomorrow, there is no reason why Marvel can’t bring their own pintsize hero to the small screen. He could even be introduced in Marvel’s Agent’s of S.H.I.E.L.D before moving on to the upcoming Damage Control.

The Demigod Son of Zeus may be a strange choice for a character who doesn’t require much budget, but if you look at it the only real power that needs to be displayed is his super strength. Super Strength being possibly one of the easiest powers to display, we have already seen it on display several times on TV in the past, Deathlok in Marvel’s Agents of S.H.I.E.L.D, Clark Kent on Smallville and Jessica Jones in the Netflix show of the same name. The other interesting aspect is that introducing this character could open up a huge range of opportunities with the character’s background in Greek mythology. Perhaps once Coulson and the gang have finished dealing with the Inhumans, they could explore the greek heroes it could even introduce Phobos, the god of fear and member of the Secret Warriors. A Non-Powered individual taking on evil armed only with a bow and arrow, stop me if you’ve heard this one before. If there is one thing that the C.W. show Arrow has shown us, is that archery can be portrayed extremely easily on a TV budget. Of course the bigger issue with bringing Hawkeye to the small screen would be the cost of Jeremy Renner. This may not be as much of an issue if the series was to picked up by Netflix, given their higher budget than the usual network drama. A Hawkeye series would definitely be well received by fans, many of whom would love to see an adaption Matt Fraction’s Hawkeye series, which took a much more grounded, street-level take on the character. If they couldn’t secure Renner, there is the option of replacing Barton’s role with that of his protege, Kate Bishop either in her own series or as a supporting role in one of their other shows. 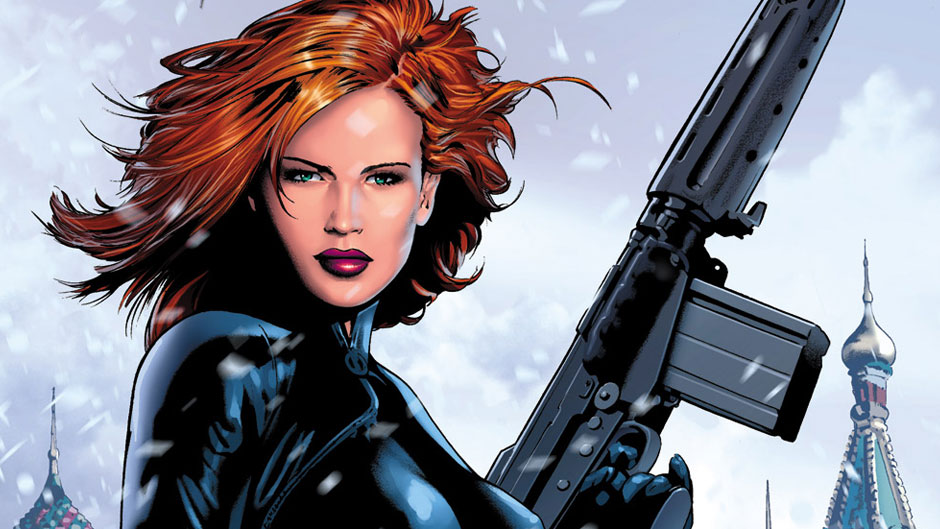 Black Widow is a character with such a rich history, it would almost be criminal not to show it. With Kevin Feige recently revealing that Marvel is committed to a Black Widow film, but with Marvel’s film schedule already full until 2020, will there be time. The other option to develop this backstory of course would be a T.V. Miniseries, however this is where we fall into the same trap as a Hawkeye show. Could they afford Scarlett Johansson and not only that, could she commit to a longer schedule a series brings. They could even combine the two characters into one show, finally showing us what went down in Budapest. Of course, like many of these characters, there are other who have held the mantel, let’s not forget the second Black Widow, Yelena Belova. With a similar skill set to Romanoff (and most S.H.I.E.L.D. Agents come to mention it) it would be easier and cheaper to introduce this character to Marvel’s Agents of S.H.I.E.L.D. whilst still giving the opportunity to explore more of The Red Room history. Even if Netflix can somehow secure the A-List actress for a series, Belova would make for an interesting antagonist. 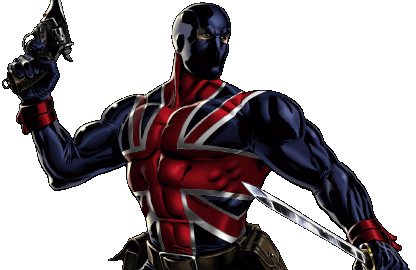 With Marvel taking on so many shows, they may wish to outsource one or two of them and where better than to the BBC. Great Britain in Marvel has quite respectable catalogue of heroes, Captain Britain, Spitfire, Lionheart, even Blade is a British hero. But perhaps the easiest and most interesting to see would be Union Jack, with his powers consisting of Webley Pistol, a Silver plated dagger and some impressive athletic skills this character would be incredibly easy to adapt. Whilst the current Union Jack, Joey Chapman would make sense as the lead, the show could deal with the first person to don the name, Montgomery Falsworth, who appeared as one of Captain America’s howling commando’s in Captain America: The First Avenger played by J.J. Field. This could open up many possibilties for further World War Two Captain America stories in flashback. Besides the modern day incarnation spends most of his time hunting down vampires. Who wouldn’t want to see that in the MCU? Of course if not, there is always Captain Midlands.


Unlike her ill-tempered cousin, Jennifer Walter’s doesn’t need to transform to become her gamma powered alter ego. Whilst this means the actress will always require green makeup, it doesn’t exactly require a large budget to do and as we have discussed earlier, Super strength is relatively easy to portray on screen. A She-Hulk television show would also work on so many levels, as both as both a superhero show and as a courtroom procedural dealing with Walters’ day job. It could also be an opportunity to introduce Hulk villains to the MCU, seeing that we aren’t likely to be seeing another solo outing for the Jade Giant. We have already been introduced to the MCU version of Deathlok in the form of J. August Richard’s Mike Peterson on Marvel’s Agents of S.H.I.E.L.D.. Unfortunately the character seems to have dropped off the radar in the recent season. It’s implied that the character is off having his own adventures in the background but wouldn’t it be more fun to see what’s going on? Perhaps as the new mid season replacement to Agent Carter? It would require the character to recieve an upgrade giving how much his current look is ‘Lacking’ to say the least. Even if the character doesn’t warrant his own series, a case could at least be made to bring him in as a recurring character in Marvel’s Agents of S.H.I.E.L.D.

While The New Warriors biggest influence in the comic world was the blunder in Stamford, which saw the deaths of over 600 civilians and plunged the Marvel universe into Civil War, the same couldn’t be said for the Marvel Cinematic Universe which went a different approach. That being said, there is still a place in the universe for a New Warriors show, especially using the reality TV format that the Comics used, much like the 2012 film Chronicle. The team itself can all be portrayed on screen with relative ease, the main issue the show might face is whether several of the character would have been introduced by then. One of the team, Nova is a character more deserving of his own film rather than a part in a c-list superhero team. Similarly, Namorita would be difficult to introduce without first introducing Namorita and the Atlanteans, and with the rights currently being held by Universal, this could be some ways off.

Let’s get one thing straight, I’m not talking about Steve Rogers here. Like many of the heroes on this list, several people have used the name including both Bucky Barnes and Sam Wilson and while its wholly possible that the Falcon could wield the shield on the small screen it’s Sebastian Stan’s Winter Soldier who would be the most likely candidate. This could be either in his own series or as merely a cameo in one of Marvel’s other existing shows. If fan support does allow Agent Carter to receive another series, it could always go the ‘Captain America of the 1950’s’ route and introduce us to either William Naslund, Jeffrey Mace or William Burnside which could also bring about an opportunity for an adaption of the ‘Two America’s’ Comic Arc. Or if Marvel were looking for a cheaper alternative, there is always U.S. Agent. 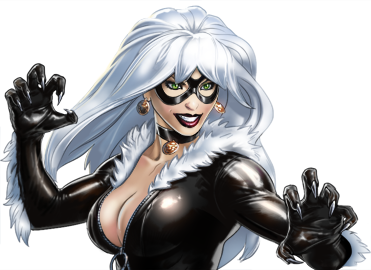 Outside of Batman, the best rogues gallery most definitely belongs to Spider-Man. But even with the character likely to become a big player in the MCU’s upcoming plans, it’s sill likely that much of his universe will go unseen. But what if there was a way to explore this universe through another character. Step in Felicia Hardy A.K.A The Black Cat. Black Cat is little more than a glorified cat burgular, something which has already been seen on television in the form of Camren Bicondova’s Selina Kyle on Fox’s Gotham. If Black Cat was to recieve her own show, not only could we see appearances from Spidey’s lesser known foes not destined for the big screen spotlight, but also from the main man himself. Not necessarily as Spider-Man, but have Tom Holland appear as Peter Parker with maybe a Spider-Man appearance in the finale. One can dream.

When people discuss which characters deserve a Netflix series, the name that always comes up is Moon Knight. While there have been rumors for some time now that the character will be getting his own series, we’re not quite sure how it would work, given that most seem to think that a budget for a character like this or Ghost Rider would be too high.

They’re giving IRON FIST a go – so why not Moon Knight?

While the characters listed above are just a few that could be portrayed  on the small screen with relative ease, any character couldtheoretically could appear if Marvel were willing to supply the money. Who knows, we may one day be seeing Thor appear on Marvel’s Agents of S.H.I.E.L.D. or perhaps even Spider-Man defending Hell’s Kitchen with Daredevil. After all, It’s all connected.