I’m not sure how many people play the plethora of Marvel mobile games that have come to various app stores over the past eight or nine years, but one of the newest ones, Marvel Avengers Academy, is an alternate universe of the Marvel superheroes where all our favorite characters go to school and train to be better heroes. And while most games of this nature are pretty throwaway, this one has suddenly revealed that its version of the hero Union Jack is, in fact, gay.

Union Jack has been a staple in World War II-era Marvel comics since being introduced in the 1970s as a member of the Invaders team. There are three different people who have taken up the mantle of Union Jack over the years; which one this game is using is unclear, but he is presumably based on Joseph Chapman, the most recent man to be introduced as the hero and one that became Union Jack during the “modern-day” comics (even though he was created in the 1980s).

In the game, he can talk to Black Widow, where she remarks that she’s surprised he hasn’t hit on him. He reveals it’s because he’s gay. Black Widow remarks, “I feel like a really bad spy now,” which she probably should feel like. Union Jack also can have a conversation with everyone’s favorite bisexual mischief god Loki, who invites Union Jack to go dancing with him: 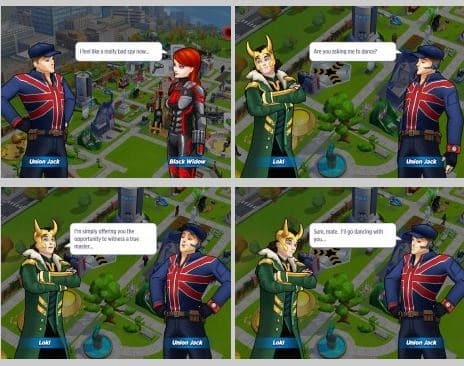 While Union Jack hasn’t had much prominence in comics of recent years, this development may mean that Marvel is working on bringing him, and possibly the other World War II-era heroes, back to prominence. He may even get his own solo series or miniseries, of which none of the Union Jacks have gotten in over a decade.

Do you think that this was a good move? Do you care at all? Comment away if you wish.