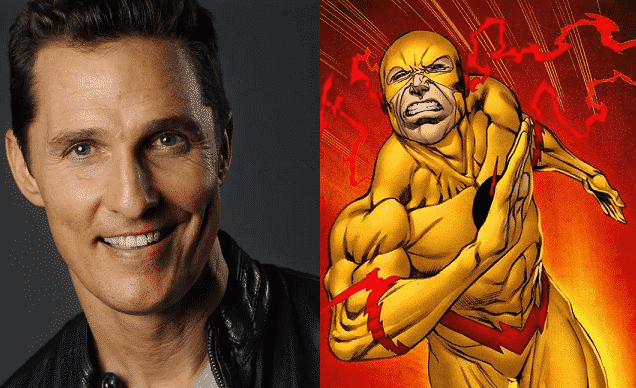 Artist BossLogic is at it again, this time revealing his design for actor Matthew McConaughey as Reverse Flash.

As an independent artist, BossLogic used Twitter to reveal his look for Ezra Miller as The Flash in the new Justice League film. With fan response being so positive, he decided to go at it again with Reverse Flash:

Reverse-Flash is a name used by several speedsters who are enemies to the Flash. The Rival was the speedster arch-nemesis to Jay Garrick in the Golden Age. Professor Zoom was the first villain to call himself Reverse-Flash, a 25th Century scientist who fought Barry Allen in the Silver Age. His successor was Zoom, an enemy to Wally West who replicated super-speed by moving through time. Inertia was the evil counterpart to Bart Allen, also calling himself Kid Zoom. The New 52 reboot introduces Daniel West, Iris West’s brother, as the new Reverse-Flash, while Rebirth returns Thawne to the role.

Reverse-Flash was created by John Broome and Carmine Infantino, first appearing in The Flash #139. (1963)

Although McConaughey is not officially attached to any DC films, rumors have been going through the web that he’s been looking at both Marvel and DC scripts. This included a main villain role for Guardians of the Galaxy Vol. 2, which McConaughey rejected and incidentally gave DC fans hope that he’ll star in the up and coming DC film franchise.

The Flash will feature in his own solo-film come 2018, which is said to be based on the hero’s most recent comic run by Geoff Johns, DC’s CCO. With that in mind, it may be possible for McConaughey to appear as Reverse Flash – or anyone, really, but still; it’s fun to speculate.

The Flash will make his first appearance in Justice League, which hits theaters November 17, 2017.

Do you think McConaughey would be a good fit for the role of Reverse Flash? Be sure to tell us your thoughts in the comment section!

JUSTICE LEAGUE Could Be The Most Expensive Film Ever Made
New Clip From BATMAN: THE KILLING JOKE Released
Advertisement
Advertisement
To Top