Both predictions came true. The tears had nothing to do with his character’s fate in the film. Rather, it was seeing the enthusiasm, the youthful exuberance, the absolute adorability he brought to the role of Pavel Chekov. It’s impossible not to enjoy every second he’s on the screen, simply because you can tell that he enjoyed being there. We’ve said it a million times, and yet not nearly enough: Anton, you are missed, and you will never be forgotten.

Now then, on to the film itself. This movie does a great job of paying homage to the past, while still doing something new. There aren’t any lame non-twists a la Khan. The plot makes sense (at least, in the 24th century Starfleet universe), and no loose ends are left untied.

There is a much better balance of screen time and development for all the main characters than we saw in the previous two films. Every core member of the bridge crew has a story that flows throughout the film, rather than just one or two relevant scenes. They all have their brave, heroic spotlight moments as well. It’s probably fair to say that Kirk and Spock still have a small percentage more than everyone else, but I suppose that’s to be expected. Our fearless leaders both have very important decisions to make, which will both impact and be impacted by their crew and the film’s story.

The third member of the triumvirate, Bones, has significantly more lines and screen time than in films 1 and 2. We finally get to see that there are more sides to his personality than just the surly curmudgeon.

Sulu is still a badass, which is always fun to see. We also get a brief glimpse of what he has at home that gives him something to fight for, a reason to survive at all costs. And he has a hilarious moment of putting Kirk in his place.

Uhura remains a strong character that happens to be female, rather than one shoved in for the sake of a cliché token. You actually tend to forget that she’s the only woman on the bridge. Her stoicness in the face of grave danger is, as Spock would say, admirable.

And Chekov goes from being the bit player he was in the first two films, to a strong supporting character this time around. His genius and his bravery save many lives, and he has a significant amount of screen time. This being the last time we’ll see the character on screen, I can’t say that I’m disappointed in anything he didn’t get to do. He’s a hero more than once. Now for the new characters. I enjoyed Jaylah much more than I expected to, based on the trailers. She’s a very amusing presence, but it’s never just a silly joke for the sake of comic relief. She’s also a badass, courageous fighter, a vulnerable victim, a character with layers and depth. I hope she is involved in part 4.

Krall, our villain, is an imposing presence indeed. There isn’t much I can say about him without spoilers, but Idris Elba is playing him, so you know it’s going to be good. The man is incapable of turning in a bad performance.

All in all, it was great fun to watch, well balanced with serious and even somber moments. The effects are great as always, and I noticed none of the dreaded Abrams lens flare. There are a few surprises musically, but the suit the plot surprisingly well. 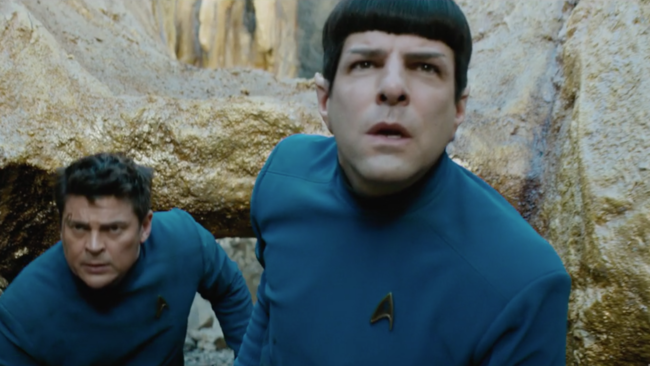 Having done away with the rehash factor that clouded many fans’ view of Into Darkness, Beyond goes back to the enjoyabilty of the ’09 film. The cherry on top of the originality in this movie is the interesting twist of just who our villain is, and why he’s doing what he’s doing. As a lifelong Trekkie, I didn’t see it coming – and I hope you all have as much fun watching this as I did.