Evil Dead 4 With Bruce Campbell Could Be On The Way

The Evil Dead franchise is one that’s branched out quite a bit in recent years. Originally a trilogy, the series spawned a remake in 2013 followed by a sequel in the form of a television series in 2015. The TV show was composed of various Evil Dead 4 concepts, and many fans thought that was the closest we’d ever get to a third sequel. But it seems it could still be in the cards.

During a press panel from Starz at Comic-Con, executive producer Rob Tapert had this to say about a potential Evil Dead 4:

Nothing’s off the table. We’re thinking about what that could be, and who that would please. Sam [Raimi] talked for many years, teasing the world that we were going to make ‘Evil Dead 4’. And that kind of turned into a TV series. Now Bruce [Campbell] and I are going, ‘Well, there’s a possibility of a movie here.’ So there could be one. Anyways, we’ll see what happens.” 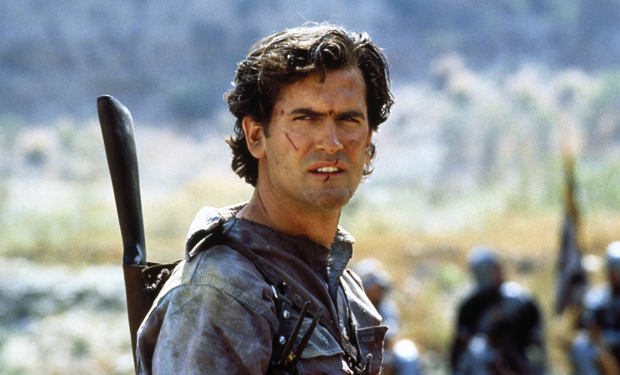 Tapert also explained why Army of Darkness, the third Evil Dead film, wasn’t referenced in the TV series and how we can expect some references in the upcoming season.

“So, ‘Army of Darkness’ is owned by MGM, and we just never had a chance to properly reference it in the first season,” Tapert explained. “I read somebody’s online thing, ‘Oh look, they’re only pulling from these two [‘Evil Dead’] movies.’ This season, we do bring up Ash’s events in ‘Army of Darkness’, and reference it. It was more that there wasn’t a place for it in our storytelling that we needed to talk about that. If he started blabbing to these shop clerks about, ‘Yeah, I went back to the Middle Ages and did all these things,’ [it would just be exposition]. But that is in his memory bank, and he’s going to pull it out at the appropriate time.”

Looks like we’re getting into a more connective timeline with potential new movies; and for Evil Dead fans, it’s going to be quite a ride. Now if we could just cross the remake over with the original continuity.