Why The WWE Should Get Rid Of BROCK LESNAR (Before you read this, and most definitely before you comment, please don’t even lift a finger to type “But wrestling is fake.” Because it isn’t. Is it scripted? Yes. Is it choreographed? Absolutely. But the injuries that happen in the ring are often very real – sometimes career-ending. As well as the awful dispositions that often lead to backstage altercations. And that’s why this matters.)

In just the latest in a long string of unacceptable behavior, Brock Lesnar beat his SummerSlam opponent, Randy Orton, into a bloody mess. Blood is a big no-no in this PG era. Drawing it was bad enough, but to keep pounding on Orton’s head while it continued to gush was simply uncalled for. Most wrestlers would be facing some sort of disciplinary action, but not Brock Lesnar.

Why? Apparently, simply because he’s Brock Lesnar. As Vince McMahon’s current teacher’s pet, the beast can do no wrong in the boss’ eyes. In fact, after Sunday night’s match ended, Chris Jericho decided to stand up for his friend and ask the corn-fed lunk exactly what the hell he thought he was doing out there in the ring. Lesnar, of course, shrugged it off, because why give a shit? This flippancy led to a physical altercation, which, by all accounts, was in Jericho’s favor before being broken up by McMahon himself. And guess who the boss decided to come down on? Jericho, of course.

The blatant favoritism being shown towards Lesnar isn’t going unnoticed, either by the wrestlers or the fans. But it isn’t a new issue. Bah-ROCK has being doing things for years that would have resulted in most anyone else being wished well in their future endeavors. Not the least of which is his recent doping test failure, which has gone completely unaddressed. But let’s take a look at just a few more of the many reasons why Vince needs to wise up, and tell this glaring liability to hit the road.

1. His Supposed “Invincibility” Is Hurting the Credibility of the WWE, As Well As Other Superstars Lesnar’s ego won’t allow him to be booked as anything but unstoppable. It worked when he was a noob, many, many moons ago. He was something new, and incredibly agile and powerful. But those days are long gone. He’s older, he’s slower, and he just isn’t trying anymore. Hell, Ray Charles could see that, and he’s blind AND dead. Dude is sleepwalking through his matches, until it’s time to dole out some genuine pain. And he can’t cut a promo to save his life, causing him to inflict Paul Heyman on an innocent world. But I digress.

So the fact that this man who obviously is beatable is still being presented as some sort of juggernaut is just ludicrous, even in the world of sports entertainment. It’s an insult to the intelligence of the viewers. We know better.

It’s also an insult to everyone else in the locker room. I could give you a list as long as my arm of people who could beat Lesnar with no great difficulty. There’s Orton, of course. John Cena. Roman Reigns. Dolph Ziggler. Hell, I’m pretty sure Titus O’Neil could hand him his ass without breaking a sweat. And yet, they’re forced to job, time and time again, to the man who consistently puts on the most boring, uninspired matches of every show he’s a part of. Which, to be fair, aren’t many……..leading me to my next point.

2. He’s A Flaming Jerk With A Rotten Attitude, Who Respects No One but Himself

Lesnar will freely admit that he has no passion for wrestling. That it died when he flamed out in UFC. That he just came back for the paycheck, and as long as he gets paid, he could care less what happens to anyone else. He also has no loyalty to WWE, jumping back and forth between there and UFC, depending on the payday. 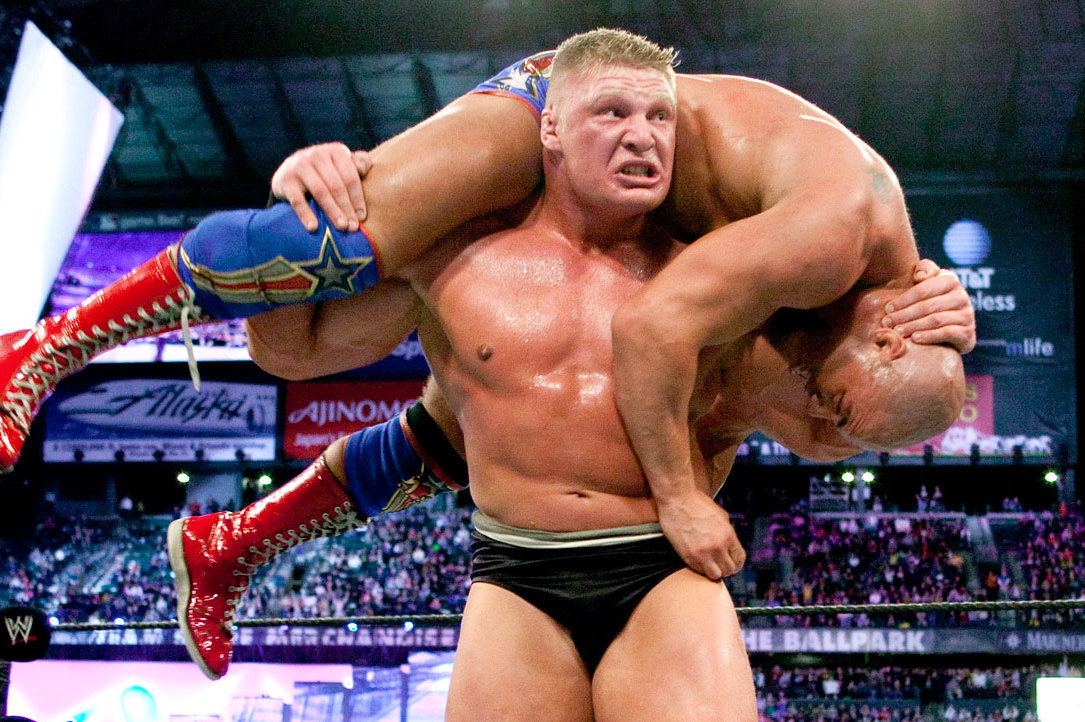 He has pretty much that same amount of respect for his fellow wrestlers – and the feeling seems to be mutual. He’s been involved in too many heated backstage incidents to list them all, but here are just a few examples: attacking a developmental manager for speaking to his girlfriend (the man literally said hello); puffing his chest at Kurt Angle, bragging that he was the better mat wrestler (Angle came out on top in that little tiff); going off on Curt Hennig, aka Mr. Perfect, on the infamous “airplane ride from hell,” spearing him into the wall of the plane; and getting in Ryback’s face because he felt threatened by the presence of another “big guy.”

He’s also thrown a plethora of hissy fits backstage, when someone from creative would have the audacity to present to him a scenario in which he would lose – or even win, but not in a dominant enough fashion. I can only imagine that his lack of respect for his fellow athletes is a large part of the reason that………

3. He’s Sloppy. His Botches Have Hurt Many Other Wrestlers – Not To Mention His Loose-Cannon Attitude, Which Has Caused Him to Injure Some Intentionally 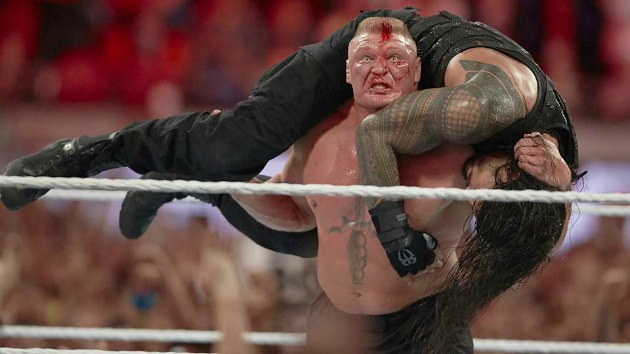 If there’s one thing the company can’t afford, it’s someone who’s a liability in the ring. Lesnar has botched more matches than Charlotte and Eva Marie combined. Once again, it’s a longer list than we have time for, but here’s a few for the lowlight reel: Shawn Michaels, WrestleMania 29; Roman Reigns, WrestleMania 31; The Big Show, Royal Rumble 2014; Kurt Angle, WrestleMania 19; John Cena, Extreme Rules 2012 (after which he was reportedly livid that Cena was still conscious); and perhaps the worst of all, because it’s the one many believe to be intentional: Hardcore Holly, SmackDown, 2002. Lesnar “botched” a powerbomb, dropping Holly directly on his neck. After Holly communicated that he was hurt and Lesnar should just pin him and end the match, he instead stood up, laughed, and kicked Hardcore in the temple, significantly jarring his head. His neck was, in fact, broken. He wouldn’t wrestle again for nearly two years.

So really, his behavior at SummerSlam should come as no surprise. And I’m not shocked in the slightest that he would conduct himself in such a classless fashion. I am, however, at a loss for words as to why he still has a job. Fans have, on many occasions, voiced their displeasure at the lack of disciplinary action, and this time is no different. A large contingent of the IWC wants his head on a pike. And even Shane McMahon himself tweeted Monday, “Brock Lesnar is a main event attraction, but last night he crossed a line.” Whether or not this will actually result in any repercussions, we’ll have to wait and see for now.

In the meantime, what do you think of this situation, given Lesnar’s history? Let us know in the comments below!