Since his debut with The Shield a few years ago, and even more so since he broke away for singles competition, Seth Rollins has proven to be one of the most talented young athletes on the WWE roster. He’s strong, agile, great on the mic, and makes a fantastic heel. Sounds pretty much perfect, right?

There’s just one problem. He keeps seriously injuring his opponents.

I’m sure we all know that professional wrestling is coordinated in such a way that the fights look real, but no one actually gets hurt – or at least, that’s the way it’s supposed to be. Of course, accidents happen from time to time, but by and large, everyone should be in one piece at the end of the show.

And yet Rollins, for all his skill and athleticism, is leaving a string of top-tier stars on the PUP list. A few examples:

*John Cena, WWE’s biggest draw for more than a decade, was left with a horrifically broken nose following a knee to the face from Rollins during a Raw main event. I was watching that match, and I remember recoiling in sympathy pain when I saw Cena’s nose shift from the middle of his face to under his right eye. He required reconstructive surgery, and missed several weeks of competition. *Wrestling legend Sting, who held out on joining WWE for more than 20 years, finally signed on in late 2015. Fans were absolutely stoked, thinking of all the great matchups The Icon would have against the E’s best. Sadly, those matches never took place. During the Night of Champions pay per view last December, Rollins threw Sting, not once but twice, back-first into the turnbuckles, in a maneuver known as the “buckle bomb.” Sting said he lost feeling in his arms after the first one, then had temporary paralysis in his legs after the second. He never fought another match. 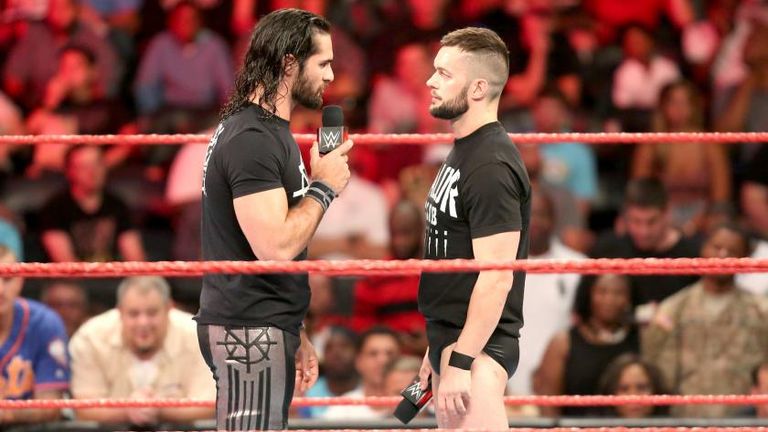 *And now, the latest name on the growing list is former NXT standout Finn Balor, who was injured during his Universal Championship match against Rollins at last Sunday’s SummerSlam pay per view. Rollins decided to use his buckle bomb move outside the ring, slamming Balor into the barricade. Balor’s shoulder was dislocated from the impact, and the dude had the balls to pop it back into place himself and finish the match. Which he won, to the crowd’s explosive joy. But the celebration for the new champion was short lived. It wasn’t just a dislocation, but a torn labrum as well. Balor needed to have surgery immediately, and would be out of action for at least six months. It was a heartbreaking turn of events, since he had just been called up to the main roster a few weeks before. When he decided to relinquish the title just 24 hours later on Raw, you could tell his tears were genuine, as were those in the audience.

These injuries we all accidents, and Rollins has expressed genuine remorse for his opponents. But they still happened. So the question is now, who holds responsibility, and what will be done to prevent future incidents?

WWE Hall of Famer Bret “The Hitman” Hart had some pretty strong words on the situation when he was interviewed yesterday by Wrestlezone.

I take no great pleasure in saying ‘I told you so,’ but if you’re a professional wrestler and you keep hurting your opponents, and / or yourself, clearly you’re doing it wrong. I wrestled with a very realistic and physical style, and not once in 23 years did I ever hurt one opponent, ever. Seth Rollins needs to improve his technique and become the safest wrestler in the business. I have great respect for Seth. I believe he’ll improve and hopefully stop hurting the talent before someone gets killed. Wrestlers have to trust one another. If a wrestler holds the life of another wrestler in his hands, for the sake of his family, his wife and children, you plain and simply cannot drop it!”

I saw this coming. If anything, WWE producers are negligent for not speaking to him about it already. Instead, they’re probably gushing with joy, slapping him on the back and telling him ‘great job!’ Bill Goldberg was similar. And Samoa Joe. When I think of Samoa Joe nearly killing Tyson Kidd, and then see him continuing to use that deadly finsher of his, I just shake my head. It’s not real, it’s only supposed to look real. Wrestlers are not crash test dummies!”

It’s understandable that Hart would be upset about Tyson Kidd’s injury, since Kidd is family, being the husband of Hart’s niece, Natalya Neidhart. But he wants to stand up for everyone who has been the victim of dangerous botches, or moves that are simply too powerful to be safe. Wrestlers are going to take their bumps. It’s what they signed up for. But career threatening, or even life threatening injuries are not in the job description.

The ironic thing is, Rollins’ former finsher, the “curb stomp,” was retired because it was deemed too potentially dangerous. Yet no one was ever seriously hurt by that particular move. Hopefully, the flying knee and the buckle bomb can be modified in ways that don’t continue to put careers at risk.

What do you think is the solution to this issue? Should Rollins remove the maneuvers from his repertoire? Keep them, but do a modified version more carefully? Or is everyone overreacting to the situation? Tell us your thoughts!