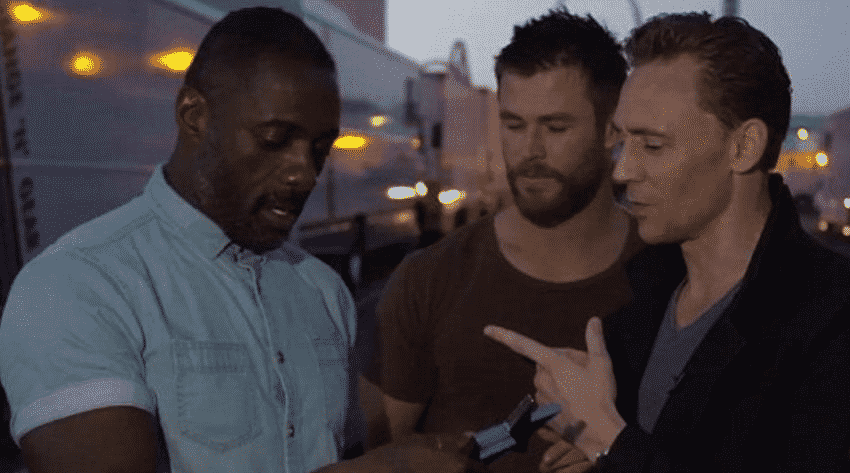 One of the most critically acclaimed television events of the year was the miniseries The Night Manager, based on John Le Carre’s novel of the same name. Tom Hiddleston drew raves with his portrayal of Jonathan Pine, a soldier turned spy who must go deep undercover to bring down Richard Onslow, played by Hugh Laurie.

The series is likely to win a slew of statues this awards season, and the first one is officially in the books: Hiddleston won the TV Choice Award for Best Actor. Still in Australia filming Thor: Ragnarok, he was unable to attend the ceremony to accept in person. Instead, he filmed his acceptance speech on the Thor set.

However, he wasn’t the only actor on set who was ready to make a thank-you speech. Chris Hemsworth crashed the party first, jovially thanking people for watching his first television work, on the Australian soap Home & Away. Then Heimdall himself, Idris Elba, showed up and feigned sadness that his BBC series Luther wasn’t nominated. (To be fair, Luther has won several awards in the last few years.) The trio then joked about deconstructing the trophy, so they could each share one of its three stars.

It’s nice to see how well the MCU actors get along with each other. They all seem to genuinely be friends, which a refreshing change in a world full of behind-the-scenes feuds and snarky celebrity gossip.

What do you think of the backstage camaraderie? Tell us in the comments!