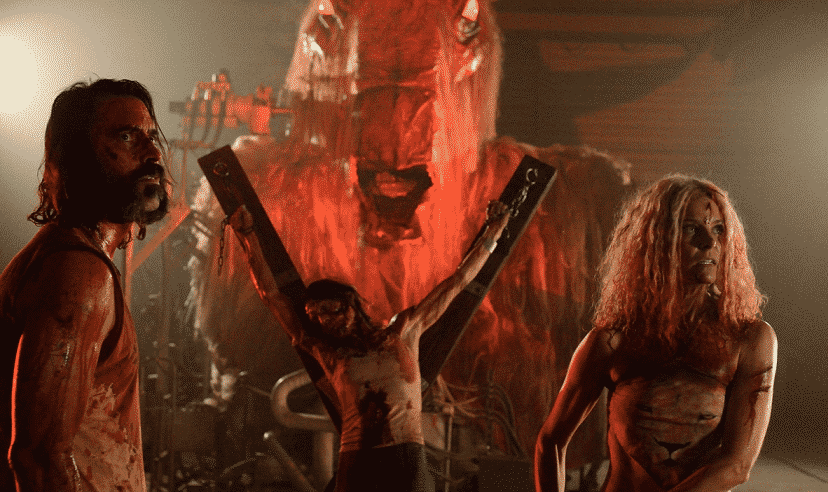 Rob Zombie is back and he’s certainly not pulling any punches. 31 is his latest venture into the horror genre in which he uses all of his familiar tropes from his past movies and amplifies them up to 11, creating something truly mesmerizing. If you’ve not been a fan of Zombie’s previous work then there’s nothing here that’ll change your mind, however if you’ve enjoyed past installments, such as House of 1000 corpses and The Devil’s Rejects, then this’ll certainly tick all the right boxes.

Thirteen years since his directorial debut, most people will know by now what they’re going to get with a Zombie film and if you’ve yet to be on board, then chances are you’ll probably never will be. Set in 1976, we once again head into carnival territory as a group of very unlucky carnival workers are captured and forced to play a game in which they’re hunted down by a bunch of killer clowns (who are known as the “The Heads”). With a grindhouse aesthetic that’ll delight fans of the genre, Zombie is able to craft a delightfully dark throwback film which contains all of the humour and zaniness of movies from the past and catapult it to a modern audience.

One of the real strengths of 31 is the diverse and colourful characters that are on offer. Whether that’s the protagonists or the villains, each and everyone of them are memorable in their own distinctive way. No matter how minor the character may be, the audience are still drawn into the action.The protagonists are well shaped and likeable, all of whom are different enough to stand out from each other which is a true rarity in a film of this nature.

It’s also refreshing to see a bunch of characters who literally fight for their lives instead of the usual hours worth of shouting, screaming and running away that most slashers have to offer.

Sherri Moon Zombie is once again the lead actress (surprise, surprise?) and does a solid job at being in the forefront of the action. Although this isn’t the kind of movie for character progression, it’s still fun to see a character who is willing to fight for her life no matter how dire the odds. We’re then treated to a handful of ludicrous characters in the form of “The Heads.”

Without revealing too much about the trained killers let’s just say that there’s one in particular who is aptly named Sick-Head, who is probably one of the most amusing, gob smackingly, ridiculous characters to appear in a horror movie in a number of years. The majority are simply bad taste caricatures, although that’s exactly what’s required in a film of this nature, making it all the more satisfying when they meet their grisly demise. Malcolm McDowell also appears sporadically throughout, lending his iconic voice to proceedings even if it is pretty clear that he’s only there for the paycheck.

The real show stealer however is Richard Brake who portrays the villainous Doom-Head. Although his screen time maybe limited, he’s able to chew up the scenery in every shot he’s in. It’s a performance that is able to make full use of his physical attributes and raw visceral anger to create a character that puts Suicide Squad’s Joker to shame. Much like Captain Spaulding from House of 1000 corpses, it’s Doom-Head who’ll be renowned and lauded for 31.

Many horror filmmakers have constantly tried and failed to create iconic characters however it seems as if Rob Zombie truly has a knack for hitting it out the park when it comes to sculpting villains that you won’t be forgetting in a hurry.

Overall 31 is bloody, vulgar and everything you could possibly want from a Rob Zombie film. He’s once again created a grotesque, sleazy slasher that’ll have you on the edge of your seat throughout its entirety. 31 doesn’t pretend to be anything more that what it is and it’s refreshing to see a good, old fashioned throwback rather than another quiet, quiet, BANG, snorefest. Having been crowdfunded, it seems as if the fans have been truly rewarded with what can only be described as a whole lot of fun.

With modern day horror movies being carbon copies of each other and made by a bunch of men in suits, it’s important for passionate filmmakers such as Zombie to produce films that keep the horror genre alive. In recent years the genre has unfortunately become one dimensional and unimaginative however it seems as if crowdfunded ventures such as this may very well be where the future of horror lies. By no means for everyone, 31 is exploitative cinema at its shameful best. If you love a bit of blood, tits and prosthetics then you’re in luck!