We’ve received a ton of photos and videos from the set of the upcoming Marvel Cinematic Universe film, Spider-Man: Homecoming during its filming, and were gifted with two more pictures today – that tease Tony Stark.

The first gives us a peek at the newest addition to Tony’s collection of beautiful sports cars. This one appears to be a Bentley, a classic status symbol for the mega-rich. And we all know how much Tony Stark likes reminding people that he’s a billionaire playboy.

But he’s also a genius philanthropist, which leads us to the second picture: a poster for the 2018 Stark Expo. We first saw the Expo in Captain America: The First Avenger, when a pre-serum Steve Rogers attended with hetero life mate Bucky Barnes, and the two were astounded by the incredible technology being developed by Howard Stark.

More than 60 years later, Tony held another Expo in Iron Man 2, where Justin Hammer unveiled his unmanned drones, just before everything went to shit and they turned into murderbots.

Here’s hoping that the next Stark Expo will be a bit less eventful. What will Tony have in store for his audience in 2018? Let’s look at the poster for clues. 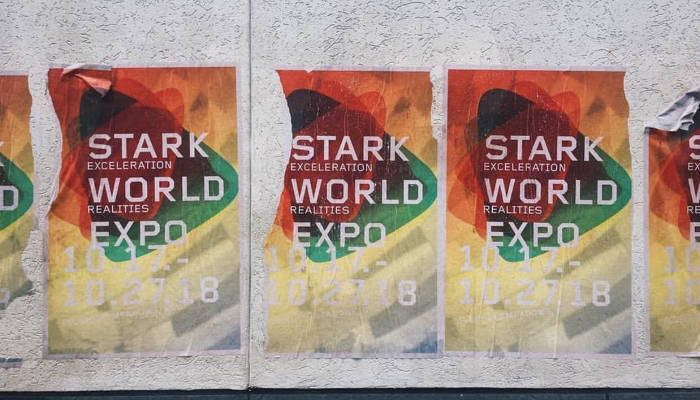 “Stark Exceleration” would seem to hint at some new technological, and possibly vehicular, advancements. “World Realities,” meanwhile, certainly sounds like it could be referring to one Dr. Stephen Strange, who by then will have already taken us on a journey through new worlds and alternate realities. Perhaps by this point, the “Awesome Facial Hair Bros” will have teamed up to see how these new discoveries can benefit the Avengers, and the world.

And then there’s the question of why the Stark Expo is taking place in a Spider-Man movie in the first place. Is Peter there as a part of the crowd? A personal friend of Tony’s? A brilliant young scientist in his own right? Or is there perhaps a villain who needs to be thwarted putting the participants in danger?

We’ll find out when Spider-Man: Homecoming hits theaters on July 7, 2017. Doctor Strange, meanwhile, will make his debut on November 4 of this year.

Do these on-set sneak peeks make you even more excited to see these movies? Let us know in the comments!