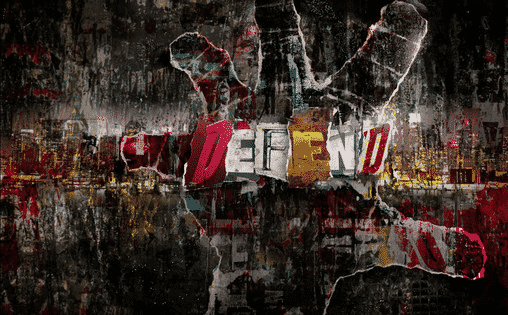 If there’s one thing that Marvel enjoy, its fueling a bit of rampant fan speculation. Sure, they telegraph well in advance what the movies are going to be called and when they’re slated for a release, and then the well-orchestrated dance between the studio and the fans begins. Yep, Marvel have already told you which of their heroes are going to headline each individual feature. But who will the Big Bad villain be? Which cameos from other future Marvel characters can we expect? Will there be hero team-ups and crossovers? JUST WHERE IS THIS ALL GOING?????

Thus begins the slow drip-feed of casting calls, rumors of A-list actors being sighted leaving studios, leaked set photos showing mysterious props and costume pieces. This in turn leads to months and months of busy fan forums, and lots of free advertising for Marvel. Now, it has been argued that the television arm of the studio has always played second fiddle to the mainstream MCU, which may have been true in the past. Until Netflix came along. The Netflix/Marvel collaboration was unlike anything the fans had seen before. Deep and meaningful character development. Hyper-violent and well-choreographed bloody fight scenes, and some of the best villains we’ve seen so far on screen.

Their 13 episode format is the perfect length to introduce new characters, tease and fully expand on their backgrounds and then progress their story arcs to the inevitably brutal showdown. And it also allows for the development of some truly memorable and much needed supporting characters too. Something that the existing Marvel TV offerings, and indeed some of the movies, could benefit from.

Well, it transpires that the Netflix shows might now be employing a similar tactic in terms of baiting the fans, the same as their big-screen cousins. When it was announced that there would be a five series run, culminating in a main ‘Defenders’ series, Google immediately went into meltdown as fans tried to guess ahead of the game what hurdles our new hero team might face. So now we find ourselves halfway down that road, with two hugely successful shows under our belt and the added bonus of a new ‘Punisher’ series added to the melting pot, largely due to a career-defining turn from Jonny Bernthal.

This year’s SDCC saw Netflix unveil a huge amount of material for the last two solo shows prior to the ‘Defenders’ run, with footage and photos from ‘Luke Cage’ and ‘Iron Fist’ officially released online. And it’s at this point that something interesting got picked up on.

In both the previously released ‘Daredevil’ and ‘Jessica Jones’ advertising, there were a large number of moody and dark outside shots, showing the various cast members out on the streets of Hell’s Kitchen during the night-time. And amidst these, there were two roughly identical shots of the two title characters, standing at what appeared to be an intersection, staring directly ahead at the camera.

The release of ‘Luke Cage’ has now seen a third, identical image join the pack, which strongly suggests that we’re only a short while away from a fourth and final shot of Danny Rand standing at the final side of this four-way intersection, completing the set. But what could these four heroes be looking at? Are they all cautiously surveying one another, deciding if they’re friend or foe prior to a team up? Well, we have a theory on this.

The only series so far to get a second run has been ‘Daredevil’, with the studio citing the creation of ‘The Defenders’ and the ‘Punisher’ series as a reason for delaying new seasons of the other main characters. And with the promotional material for Season 2 of ‘Daredevil’, there was a wrap-around motion poster, which showed all of the featured heroes (Including the Punisher carrying the mother of all mini-guns), fighting off Hand Ninjas. This makes us think that the four Defenders aren’t standing at a crossroads looking at each other, but are in fact all staring at whoever the big bad villain is going to be for their united series.

Just who might that be? Our money is on The Hand. Most likely a reincarnated and evil Elektra. ‘Daredevil’ has gone to great lengths to build The Hand up as the most evil thing going in the MCU, and left the viewers with no doubt that we’d be seeing Elodie Yung crop up again on our screens as Elektra. In the comics, The Hand feature prominently in Danny Rand’s backstory, and the presence of Rosario Dawson across all four series adds a means of bring the four heroes together to fight a common enemy.

Or, someone at Marvel and Netflix just thinks it’s cool to repeat the same shot four times over with a different color filter on it. We have been wrong before. What do you guys think? Sound off below!

Everything We Currently Know About THOR: Ragnarok
17 Actors/Actresses You Didn’t Realize Started Out In Horror Films
Advertisement
Advertisement
To Top