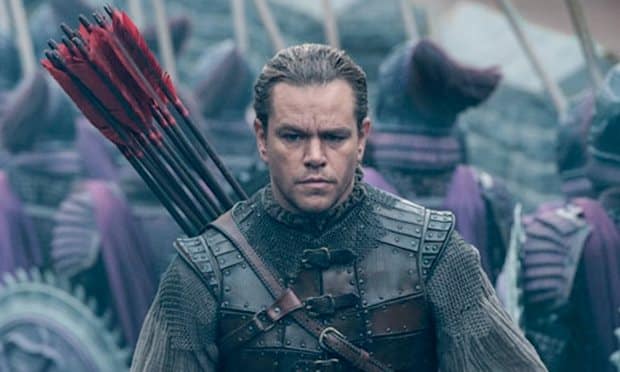 New York Comic Con has brought us a wide variety of exciting new film news this weekend. One of the key trailers to debut is the second trailer for The Great Wall. Scheduled for a February 17, 2017 release, the Matt Damon film has already received a lot of flak for its controversial casting.

Many have been quick to judge the film due to its presence of Damon in a film that takes place in ancient China. Whitewashing has been a prevalent issue in films today, so any sniff of this often times gets movie fans upset. This latest trailer however may show the film is not quite in line with that trend.

As the trailer shows, The Great Wall tells the story of a brave force that must stand against the mythical monsters attacking it. In a world where blockbusters are mostly deriving of a certain formula, this by comparison feels much more fresh.

Directed by Chinese auteur Yimou Zhang, the trailer shows a gorgeous visual look, with the seamless CGI backdrops and stunning action setpieces enticing viewers from the start. Zhang’s film feels very much in the vain of an Eastern film, with the Chinese influence being a welcomed addition to a major blockbuster.

Most may be skeptical about the film’s quality, but there seems to be a lot of promise. The action is incredibly inventive, and Damon’s track record tells us that he is unlikely to select an uninspired project. As far as whitewashing goes, it feels to me like The Great Wall is honestly one of the most diverse blockbusters in quite some time, featuring major Chinese talents in the leading roles. The presence of Damon is just an addition to a large ensemble cast, which is sadly being contradicted by the film’s marketing effort stateside.

The Great Wall is set to hit theaters in China on December 16, 2016 before its worldwide roll out.