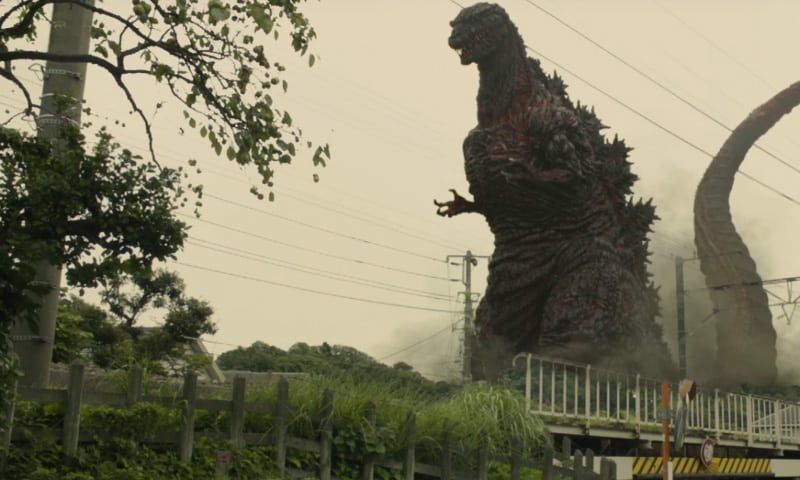 I should start off by admitting my bias. I’m a total Godzilla fangirl. I collect figures, statues, posters, and pretty much anything else I can find with him on it. I even have a cat named Kaiju.

That being said, however, I can still see flaws in his films when they present themselves. This movie isn’t perfect, but there are several things it gets very, very right.

This is Godzilla’s 31st cinematic outing, and the first from the legendary Toho Studios (creators of the character) since 2004’s Final Wars. With so many incarnations already familiar to the moviegoing public, the filmmakers made the smartest choice they could – to take the story all the way back to the beginning, instead of churning out yet another predictable sequel.

This time around, our favorite monster gets a fresh origin, and a chance to wreak havoc in a whole new millenium. Going back home to Tokyo, he gets an updated look that is still very reminiscent of his earlier appearances. He also picked up a few badass new abilities along the way.

An underwater traffic tunnel has ruptured, leaving a large number of motorists stranded inside the leaking cylinder. We soon see that the reason for the breach is a large sea creature, which seems to be unable to control its movements. The creature quickly reaches the shore, where it beaches itself and begins to advance on land.

It’s like nothing we’ve seen before. The huge, fishlike eyes and the stubby, underdeveloped arms (think of a premature t-rex) make it look surprisingly pitiable, despite its massive size. It flops, unable to lift its head, advancing only on the strength of its thick, strong hind legs.

Pitiful or not, however, the creature is causing massive damage with every step it takes. The destruction is not intentional; it’s simply a consequence of its size and ungainly movements. Still, buildings are being flattened and people are being either hurt or killed with every step it takes. So the Japanese government decides to take drastic measures, and attempt to kill the creature. But they have no idea just what they’re up against.

It’s here that the monster undergoes its first transformation – an instant evolution, if you will. Suddenly he’s standing upright, the stubs have claws, and its massive mouth opens to reveal hundreds of razor-sharp teeth. Needless to say, the attack by military force only serves to piss it off – and to feed its evolution.

In its fourth and final form, it is most definitely the Godzilla we all know and love, but with a few upgrades. When he opens his gaping maw and lets out his trademark roar, something else happens as well. The bottom jaw splits in two; reminiscent of a sandworm from Tremors, but with Kaiju teeth. And that’s not the only surprise in that mouth.

He also has a hiss-breath that seems to shimmer in the air, but stay low to the ground and spread. You have about 2.5 seconds to wonder what’s about to happen before you find out. His next breath is flame, and the shimmering hiss was an extremely flammable fuel, setting half of Tokyo ablaze. (It’s worth noting that this is the first time Godzilla intentionally causes any damage, and it occurs only after being injured by rockets.)

And he’s still not done changing into a beast from your worst nightmares. The next time he opens his mouth for a classic roar, out comes – wait for it – a fucking LASER. Yes, you read that right. A beam shoots from deep inside the enormous throat, slicing skyscrapers in two like a razorblade through butter. The Japanese military’s continued efforts to subdue the monster only serve to make it angrier………and stronger.

Finally, one of the government’s science ministers comes up with an idea just crazy enough to possibly work. Godzilla clearly can’t be killed, but perhaps he can be immobilized. A cadre of cement trucks are emptied, cleaned, and filled with a coagulating agent. Explosives are set in nearby buildings, and detonated as Godzilla walks by, in an attempt to knock him to the ground. It eventually works, but not before we see the lasers one more time – shooting from his spines, and the end of his tail. Sweet Jesus. But he eventually falls, the trucks pull into place, and science happens. He gets back to his feet, but the blood thickeners quickly begin to work. Within a few paces, his blood is solid. Godzilla is frozen in place in the center of Tokyo, surrounded by the broken pieces of the ravaged city. His reign of terror is over………for now.

THE BAD: The worst thing about this film, for me personally, was the lightning-fast dialogue. I don’t mind subtitles in the slightest, but they disappeared from the screen very quickly – sometimes before I even finished reading them, and I’m a pretty fast reader. However, I will say that the sense of urgency added authenticity to the scenes of the frantic government ministers trying to figure out how to deal with such massive, unprecedented death and destruction. Not since the atomic bomb has Japan had to dig itself out from under such widespread carnage.

But the government scenes seemed (intentionally, from what I’ve read) to be a satire of red tape and bureaucratic bullshit. It’s almost annoying, seeing an emergency situation get discussed to death and the same permissions requested multiple times before a decision is made. To me, that was the film’s biggest flaw.

THE GOOD: Godzilla himself. Liberties were taken, and as a kaiju aficionado, I’m okay with that. I like that this wasn’t just a rehash. He started with a very different look, and slowly evolved into something more familiar. The best addition to his appearance, I thought, was his skin. Rather than reptilian scales, his skin looked like nothing so much as lava; bright reddish-orange where the magma is still hot, and black where it has begun to cool. His new powers and abilities were jaw-droppingly awesome. And the effects, considering the budget, are very impressive. A combination of animatronics, puppetry, and CGI brought Godzilla to life, as well as the leveled Tokyo. All of the scenes containing him and his destruction were first-rate.

I highly recommend this to all Godzilla fans, and anyone who loves giant monsters in general. You will appreciate the creativity and innovation Toho put into this film.