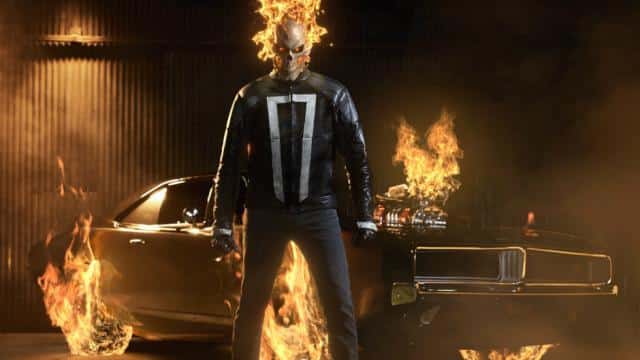 I had a few people over on Halloween night. We roasted marshmallows and talked comics. At one point, my brother asked me, “Do you think Johnny Blaze will ever show up on Agents of S.H.I.E.L.D.?” I said, “I don’t know. He’s pretty brutal for network TV. Besides, what would they do with two Riders?”

24 hours later, I was proven wrong.

Tuesday night’s episode of Agents let us in on a bit of the history of Robbie Reyes, the incarnation of the Rider chosen to appear on the show. He said he made a deal with a devil to become the Spirit of Vengeance, but he wasn’t talking about Lucifer. The “devil” in question was, in fact, the original Rider himself, Johnny Blaze.

While Blaze wasn’t mentioned by name in the episode, actor Gabriel Luna, who plays Reyes, was quick to clear up any ambiguity. Just in case the motorcycle wasn’t a dead giveaway, Luna tweeted out these comic book images, showing Reyes and Blaze teaming up. Blaze acts as somewhat of a mentor to Reyes, helping him learn how to control the Spirit’s lust for violence.

Don't mistake him for a Good Samaritan. #GhostRider #AgentsofSHIELD pic.twitter.com/vkchHNJqmJ

Both Riders will be back when Agents of S.H.I.E.L.D. returns from hiatus on November 29th. In the meantime, let’s all sit here and cross out fingers that Blaze will be so ridiculously well received that he gets his own Netflix series. If you want this to happen, share this post with all of your comic-loving friends, and ask them to share it too! The more noise we make, the closer we get.

Agents of SHIELD airs Tuesdays at 10 p.m. EST on ABC.

What do you think of this huge development? Tell us in the comments!