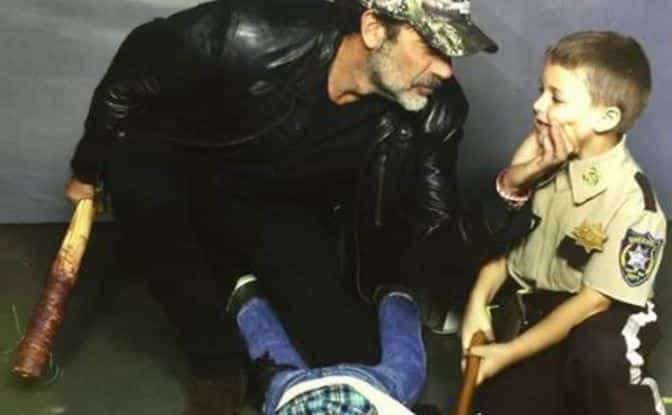 By now, we’ve all seen the horrific season 7 premiere of The Walking Dead, “The Day Will Come When You Won’t Be.” And I’m sure we’re all in agreement that this show, and especially this episode, are most definitely not viewing suitable for children. It was one of the most brutally violent episodes in television history, with two beloved main characters being beaten to death (and then continuing on until there was a disgusting pulpy mess where their heads used to be) with a barbwire-wrapped baseball bat, in front of everyone who loved them.

The wielder of the bat, known simply as Negan, is somewhat of a caricature of a villain. His cruelty, and his glee while doling it out, go so far beyond what is necessary (or even plausible) that it’s difficult to take him seriously. He isn’t there to be a fleshed-out character; his only purpose is to do awful things that make us hate him. (And yes, I felt the same way about him in the comics.)

So it’s hardly shocking that he didn’t stop with the bludgeoning. Rick Grimes, the de facto leader of our intrepid band of survivors, needed to have his defiant spirit completely broken, at least according to Negan. After he took Rick for a joyride through zombieland, during which he made it crystal clear that Sheriff Grimes is now his personal bitch, the two returned to the scene of the brutal double murder.

The rest of the group are still on their knees, where they’ve been for hours, since Negan’s mirthful selection of who would be on the receiving end of his bat. Next, he pulls young Carl Grimes, Rick’s son, from the group. Carl is instructed to lay on the ground with his left arm outstretched. Negan draws a line on Carl’s forearm, and proceeds to hand Rick the hatchet he took from him earlier. Rick is then instructed to cut off his son’s hand.

Of course, he isn’t willing to grant such a vile request. Negan, predictably, threatens to give every member of the group the bat treatment – including Carl, and finally Rick last. To make him suffer more, of course. But the devoted father still can’t wrap his head around the thought of harming his son, who’s been through so very much already.

So it falls to young Carl (who has progressed from a useless, burdensome little shit, into a brave young man, wise beyond his years) to make the decision to be the sacrificial lamb. “Dad, just do it,” he whispers, for the sake of his family. It’s the single most courageous thing his character has done to date. So Rick, still sobbing in denial, lifts the hatchet over his head, prepared to bring it down on his son’s arm.

It’s this moment that proves to Negan beyond a shadow of a doubt that Rick Grimes is really, truly broken. Surprisingly, he decides to spare Carl, at least for the moment. His group gives their orders and then takes off, leaving our survivors in an almost catatonic state of shock.

thank you for taking this pic with our kids!!!! So glad you got to see the final product!! It. Was. AWESOME! pic.twitter.com/KJ4Drgo68i

Remember how we mentioned that this is so not a kids’ show? That clearly hasn’t stopped some parents from letting their children watch it. Nor did it deter Negan himself, actor Jeffrey Dean Morgan, from recreating the gut-wrenching scene with two young fans. He posted this picture on his Twitter account, taken at the Walker Stalker Convention in Atlanta.

Morgan, for what it’s worth, seems to be a pretty decent guy. (That still won’t stop me from hating you though.) Along with this and other pictures from the event, he included the message, “Thank you to Walker Stalker Con for an amazing weekend! You fans are the greatest. Seriously. It was a privilege to meet you all.” And it will be a privilege to see Negan get what’s coming to him. Not today. Maybe not tomorrow. But one day, they’re going to kill you. 😉