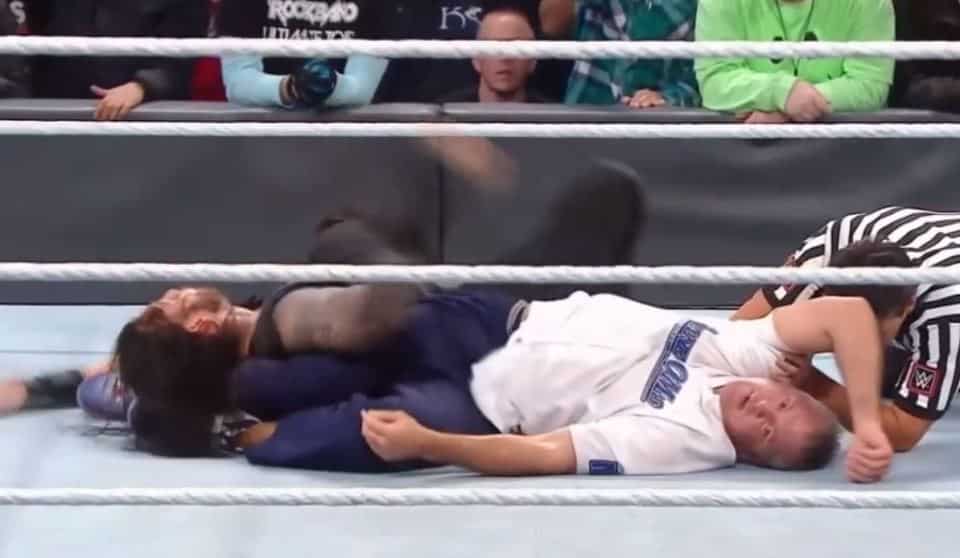 The big headline from last night’s WWE Survivor Series has been Goldberg’s stunningly dominant defeat of Brock Lesnar. However, something completely unscripted happen during the traditional 5-on-5 match, resulting in a very real injury.

Smackdown GM and sometime wrestler Shane McMahon was on the top rope, ready to go coast-to-coast on Team Raw’s Roman Reigns. But just as he was making his valiant leap, Reigns met him head-on with a hellacious spear. The move may have been planned, but clearly fell apart in execution.

Reigns’ massive body hit McMahon high in the chest, where the ribcage has little to no give, rather than near the waist, where the body can bend to absorb the impact, as spears are meant to do. Then, as McMahon slammed into the mat, his head bounced hard, leaving him dazed and gasping for breath. It was so obvious he was injured that even notorious jerk Randy Orton broke character to comfort Shane’s wife and children, who were sitting in the front row. (Orton later said, “I’m a father. I know what it’s like to have your kids at ringside when shit goes sideways.”)

WWE has yet to make an official announcement regarding McMahon’s condition. However, having seen the footage, it’s clear that he most likely has a few broken ribs, as well as a concussion. While broken ribs are certainly painful, head injuries are no joke. One has only to watch the tape of Carolina Panthers linebacker Luke Kuechly’s injury during last Thursday’s game to see the exact same confused, terrified look in his eyes.

While he doesn’t wrestle often, Shane O’Mac has a history of putting his body at risk in ways most seasoned competitors would never consider. Coast-to-coast (leaping from the ropes in one corner of the ring onto the opponent in the opposite corner) is his signature move, but he’s also been known to jump from the top of a 20-foot steel cage, be suplexed through glass walls, and fling himself off of the TitanTron scaffolding, some 40 feet in the air. In fact, he might just be responsible for more “holy shit” chants than Mick Foley.

But this move shouldn’t have been a dangerous one. Whether is was he or Reigns who mistimed their jump is irrelevant at this point. It was clearly an accident, and one McMahon will be paying for for some time.

It is now being reported that he was doing fine by the end of the night.