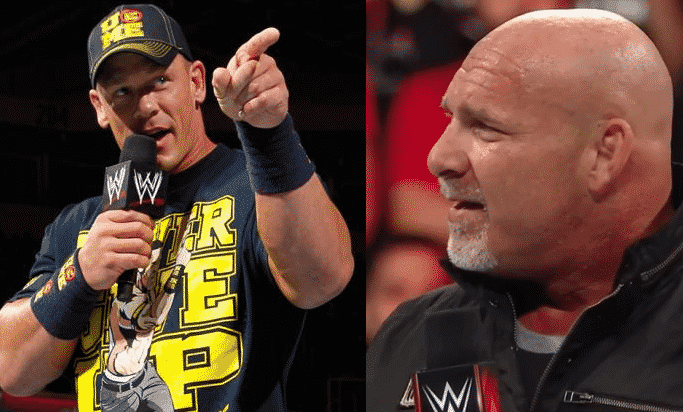 WWE fans all over the world were elated to see Goldberg return to the ring after a 12-year absence, and lost their collective shit when he destroyed Brock Lesnar in just one minute, 27 seconds at Survivor Series. And we know now that Goldberg will be a part of the 2017 Royal Rumble, most likely leading to a headlining match at WrestleMania.

It’s been an incredible few months for the wrestling legend, and most in the locker room are happy for him. But one person is less than enthused for his resurgence – none other than John Cena.

Don’t get it twisted; Cena doesn’t begrudge Goldberg his incredible second-chance run. What bothers him is the fact that “part-timers” – wrestlers who are contractually obligated to perform in just a handful of matches a year, such as Goldberg, Lesnar, The Rock, and the recently returned Undertaker – are being paid proportionally *much* more than the hard workers who wrestle weekly, like Dolph Ziggler, Dean Ambrose, Roman Reigns, The New Day, and Cena himself (recent injury notwithstanding).

Cena feels that the dedication of himself and the other workhorses is being taken for granted, overlooked for the sake of big “event” matches – the stunt bookings that are clearly meant only to bring in a one-time ratings pop. We all know you can count Lesnar’s annual matches on one hand, that after WrestleMania, we won’t see The Rock again for 364 days. These things are a given. So why are they being paid so much more than the men and women who make up the backbone of the company?

The bitter irony here is that Cena could most likely leave, and return a few months later with a sweet part-time contract of his own. But he loves the business too much to play it like that. Instead, he’ll keep fighting behind the scenes for himself and all the other underappreciated talent in the locker room.

Do you think Cena has good reason to be upset? Or should he suck it up and be glad he’s got what he’s getting? Be sure to tell us in the comment section below!