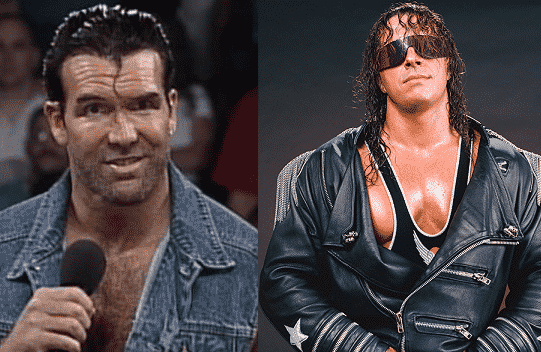 Wrestling legend Scott Hall, aka Razor Ramon, has never been one to mince words, and he’s not about to start now. In an interview with Total Wrestling Magazine, Hall told a few tales of the past from his insider point of view.

On Creating His ‘Razor Ramon’ Character
“I felt really flattered, because Vince McMahon left from the TV production to personally direct my vignettes. He flew with me to South Beach in Miami to do it. I knew things were cool. Vince had never seen Scarface before, so when I came out doing the Scarface inspired gimmick, he thought I was a genius. I never told him otherwise. I don’t know why they don’t introduce new characters with vignettes like that anymore.”

On Last-Second Changes to His Debut at Survivor Series 1992
“It was supposed to be me and Ric Flair against Macho Man and Ultimate Warrior. Vince used to lay out storylines way ahead of time. Going into this match, the plan was that I would hurt Randy and retire him so he could go into broadcasting. They were going to keep pushing Razor as a major heel force, but Warrior held Vince up for more money, and he didn’t get it this time. So they brought Mr. Perfect back from announcing to wrestling. When plans change like that, in that situation you have to feature a decent substitute, otherwise the fans will feel like they got screwed. Warrior doesn’t show up so you put perfect in. Good replacement.”

On His Championship Match with Bret Hart at Royal Rumble 1993
“Going into that, if I would have retired Savage, I would have been red hot. I would have had some good steam going into that. I’m not a Bret Hart fan. To me, Bret’s really selfish. If you watch, there’s points in that match where I’m hitting him with what’s regarded as a hell of a working punch. I’m hitting him and he’s not even moving, he’s not even registering it. But it was what it was. He was the new champion and he needed a win, which he got.”

Hall has made his contempt for Hart known in the past. On Steve Austin’s podcast in 2015, he said that Hart was partially responsible for Kevin Nash defecting to WCW. At the pay per view event Rage in the Cage, Hart faced Diesel in a steel cage match. The planned end of the match was for Undertaker to rise up through the bottom of the ring and attack Diesel after Diesel put down Hart with the jackknife powerbomb. Diesel would have the match essentially won, but then, due to Undertaker’s interference, Hart would retain the title. But, according to Hall:

“Bret wouldn’t take the powerbomb. So then Kevin is like ‘Screw it, I’m out of here.’ Because he realized, ‘Wait a minute, this is what they’re doing with me? When it comes down to a decision, this guy boo-boo faces, so they don’t do it?’ It’s one of those moments where you go, ‘Aha!’ I mean, I’ve never been a guy to bitch about a finish, but that’s what happened.”

Bluntly honest, as always. What do you think of these behind-the-scenes insights? Do you believe McMahon made the right decisions in these situations? Tell us in the comment section below!