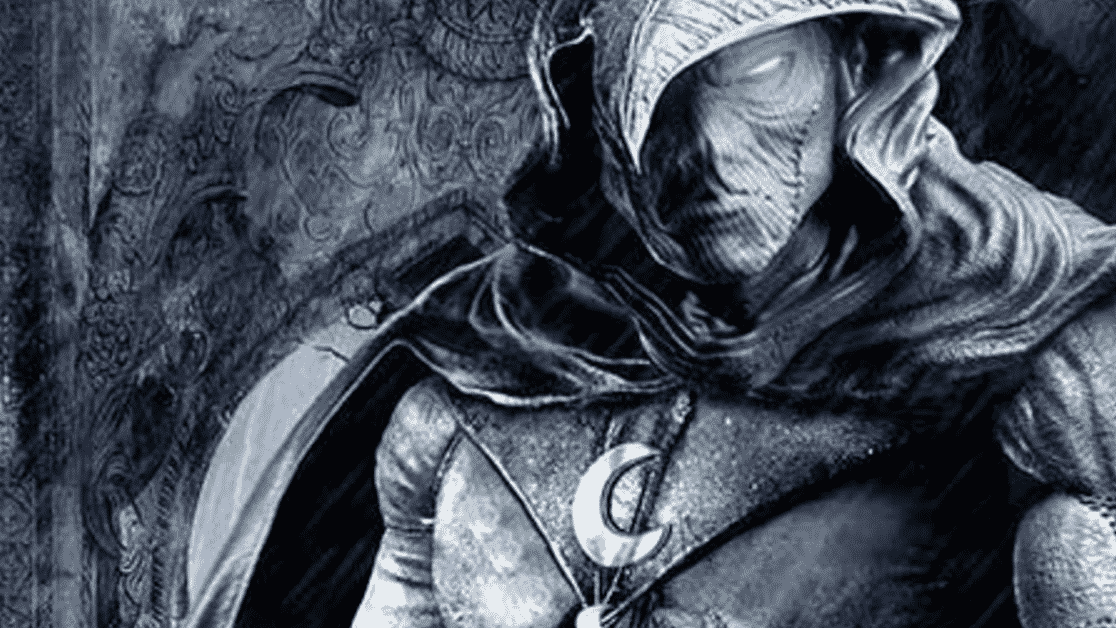 Moon Knight is one of many Marvel characters yet to actually be seen on the big (or small) screen. There has been speculation that the character could get a Netflix series at some point – when Marvel decides to focus on different characters such as Blade or Ghost Rider.

For those of you unfamiliar with the character, here’s a little education:

Marc Spector was the son of a rabbi whose family had fled Europe in the 1930s to escape the Holocaust. As Marc matured, he rejected his father’s morality and embraced materialism. He became a heavyweight boxer, then a U.S. Marine, and then a CIA operative. At the CIA, Marc worked with William Cross, who betrayed the agency, later becoming the villain Crossfire. Marc’s brother, Randall, joined him in the CIA but he also betrayed the agency, selling weapons to both sides in an altercation in Italy. When Marc’s lover Lisa overheard Randall’s plans, he killed her with a meat cleaver. Marc hunted Randall down, inflicting injuries that left Randall psychotic. Marc befriended fellow CIA agent Amos Lardner, but unknowingly turned him over to Operation: Cobra, a CIA project designed to control its agents’ minds. Fed up with the CIA, Marc became a mercenary and spent several years as a hired gun. Although he ostensibly sought to fight for causes he believed in, Marc was easily persuaded to fight for anyone who paid him enough. While working in Africa, Marc met the French mercenary Jean-Paul DuChamp, whom he nicknamed “Frenchie”. Marc and Frenchie became close friends, and served together on several missions.

On one assignment, Marc helped overthrow the government of Bosqueverde, a South American country, and assassinated its president, Ricardo Dominguez. Rodrigo Raposa took over the country, having promised Marc he would install a new democracy, but he actually established a fierce dictatorship. Marc and Frenchie eventually fell in with Raoul Bushman, a bloodthirsty terrorist. Bothered by Bushman’s savagery and by his own stirrings of conscience, Marc began to question his mercenary lifestyle. During a mission to the Sudan, Marc saw Bushman assault the town of Selima, seeking information on archaeologist Dr. Peter Alraune’s discovery of an Egyptian pharaoh’s tomb which might contain gold. Dr. Alraune attempted to stab Bushman from behind, but Marc warned him in time, and Bushman slew Dr. Alraune by biting him in the neck with his steel teeth. Disgusted, Marc helped Dr. Alraune’s daughter Marlene escape Selima, but Bushman caught Spector in the act. After Bushman executed the people of the town, Spector attacked him, only to be defeated by Bushman, who deposited the unconscious Spector in the desert and left him to die. Spector dragged himself through the sands to the tomb unearthed by Dr. Alraune and was found by Marlene and her servants. They brought him into the tomb, placing his body at the foot of a statue of the moon god, Khonshu. Marc was pronounced dead, but as Marlene wept over his body, he suddenly arose, alive. Spector believed that Khonshu had restored him to life to serve as the moon’s knight of vengeance. Donning a cloak taken from Khonshu’s statue, Spector destroyed Bushman’s forces in Selima, but Bushman escaped when Marc was distracted by Marlene, who had followed him back to the town. Frenchie arrived to help them, and Spector collapsed into Marlene’s arms, exhausted.

Aided by Marlene and Frenchie, Spector honed his abilities to wage war on crime. Using his mercenary profits, Marc created the identity of New York millionaire Steven Grant to help him mingle with influential people. He also created the identity of Manhattan cab driver Jake Lockley to make contacts with people on the streets. As Lockley, he befriended the homeless Bertrand Crawley, his main street contact, and Gena Landers, a coffee shop owner whose sons Ricky and Ray helped perform investigative work for him. Marc eventually shared his secrets with Crawley and the Landers family. Marlene, now Marc’s lover, came to regard him as Steven Grant, and he suppressed his life as Spector. Although his multiple identities threatened Marc’s sanity, Marlene helped ground his psyche. She also designed the Moon Knight costume for him, while Frenchie designed the first Mooncopter, serving as Moon Knight’s pilot. Marc brought the statue of Khonshu back to New York, still believing in the moon god’s power.

Sounds like a pretty cool character, doesn’t it? Well, ComicBookMovie got together with Hamza Javed to create what the character COULD look like if he were ever to get a live action adaptation – and they came up with some pretty amazing art! Check it out below: What do you think of this? Would you like to see a live action Moon Knight adaptation? Be sure to sound off in the comment section below!

Continue Reading
You may also like...
Related Topics:Marvel, Moon Knight