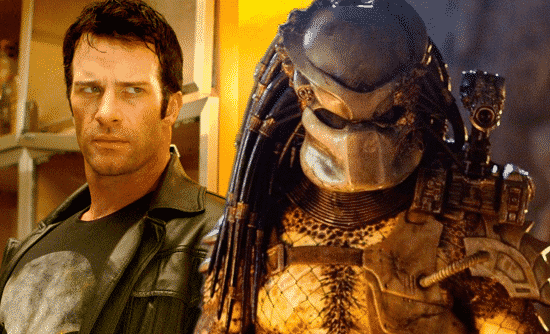 The director of the new Predator film, Shane Black, posted online a first look at the cast of the upcoming movie. Black starred in the original 80s flick and hopefully he’ll do this film justice with a pretty good ensemble cast.

Thomas Jane, Alfie Allen, and the rest of the cast appear to be sitting on a bus.

Shane Black's #ThePredator cast is lookin' ready for battle – but who's gonna make it out alive? https://t.co/JKZLPD8imH pic.twitter.com/6YImVpi4tR

Perhaps this is a transport to some location via the ground instead of a “choppa”? Will more off-color jokes be shared once again?

No details of The Predator flick plot yet, but producer John Davis said it’ll be a “fresh” take on things. That this reinvention of the franchise will indeed be unexpected.

That does say a lot and this alien from another planet is such a wild card. You could pretty much drop them and their race’s alien counter part, which is a character itself being reinvented in Alien: Covenant, into pretty much anything when it comes to storytelling.

Logan’s Holbrook mentioned that this is not a sequel and even he himself finds this to be a new take on the franchise. Apparently, it’s a combination of genres.

I’m currently working on Predator, it’s not a sequel. Shane Black has made something totally new, somehow keeping within the realm of ‘Predator’ [while also being] absolutely new in terms of the story that we’re talking about today, and rooted in something real. It’s real fresh. I don’t think you’re going to see [Arnold] Schwarzenegger. It would kind of make it a gimmick. It’s horror, science-fiction and a western.

Can you see injecting the Predator into a multi-genre film? Of course, the Predator movies tend to fall into the sci-fi/horror genre, but where do they get the western part from?

Continue Reading
You may also like...
Related Topics:Predator, Thomas Jane