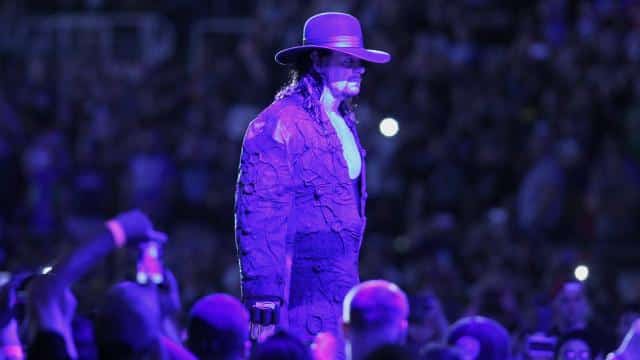 Well that was quite the Wrestlemania! If you don’t already know by now, the Undertaker wrestled in the main event last night where he was up against Roman Reigns in a match that may just be Undertakers very last. Having suffered only his second defeat at the biggest stage of them all, the Undertaker took off his hat, gloves and jacket before exiting the ring, leaving his garments in the centre of the squared circle.

Kissing his wife Michelle McCool, the Undertaker seemed to be savouring the special moment as the crowd chanted in appreciation before he returned to the locker room. Many fans have come to regard that Undertaker’s decision to leave his attire in the ring is a symbolic gesture of him retiring from competition.

With rumours having suggested that he’s in need of surgery, it wouldn’t be a surprise if this was his last outing as the Deadman. Whether or not he’ll play a role in the future is anybody’s guess however with the Undertaker being one of the most respected wrestlers of all time, I’m sure they’ll be something in store for him further down the line.

As you can imagine, fellow wrestlers and fans have tweeted in appreciation of the Undertaker and have thanked him for all that he’s done in the wrestling business during his illustrious career. With the hashtag #ThankYouUndertaker trending worldwide, you can see a few of the tweets down below:

If there's a dry eye at #Wrestlemania ur a bigger man then me. #ThankYouTaker

The most MAGICAL being in the history of our industry.#ThankYouTaker pic.twitter.com/6mmjatftJ1

As a worker and as someone that will always be a fan of this business,all I can say is #ThankYouTaker. #WrestleMania

With Monday Night Raw only a few hours away, it’ll be interesting to see what’s in store next for one of our most beloved wrestlers.

Did you enjoy Wrestlemania last night? What was your favourite match? Were you disappointed to see the Undertaker lose? Sound off down below!