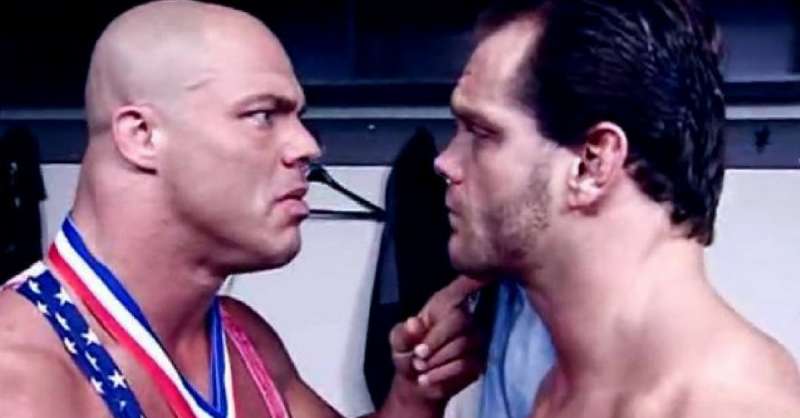 Oh it’s true. It’s damn true! The Olympic Gold medalist is back after his Hall of Fame induction and it looks as if he’s here to stay. With Vince McMahon having declared Kurt Angle as Raw’s new General Manager, it seems as if fans can now sit comfortably in the fact that one of the best wrestlers of all time may just be returning to the squared circle in the not too distant future.

However the question on many fans minds is who he’ll wrestle? John Cena? Roman Reigns? Well maybe we’re getting too ahead of ourselves however he recently spoke on Chris Jericho’s podcast ‘Talk is Jericho’ in which he revealed his best 3 opponents of all time. Many fans will not be surprised by his choices however once again there is that one man who crops up from time to time which many still feel uneasy talking about – Chris Benoit. Now despite his horrific actions outside the ring, it’s been repeatedly said by many in the business at how skilled he was, with numerous professionals touting him as the best in the world.

However, before we get onto what Kurt had to say about Benoit, his first pick was the legendary Eddie Guerrero. Having seen him wrestle in WCW, Kurt was impressed by his work in the ring although it wasn’t until he arrived in WWE in which both wrestlers got to lock horns. Having suffered a car accident in the late 90’s, Angle cited how he’d be amazed to have wrestled him at full health.

“I think Eddie was in his prime in WCW and the reason I say that is because he got in a car accident. That car accident did two things for him. It really inhibited what he could do after that. In other words, he had limits. He could still do a lot, but not like he used to. I used to watch him in WCW and be like, ‘wow, this kid’s incredible.’ But he almost couldn’t walk again after that accident, so yeah, Eddie was banged up when I wrestled him.”

Angle then went explain how Guerrero could have been the best of all time:

“As good as he was in 2004, 2005, he had to be 10-times better back then,that’s mind-blowing. I mean, he could have been the absolute greatest of all time because when I wrestled him, he was still in that top three we were talking about, so Eddie had it all. He was so entertaining, but he also had all the technique. He was such a great wrestler and he got it. He got finishes. He knew how to structure them.”

Angle then went onto talk about a time in which he and Guerrero got physical backstage after match. With Guerrero repeatedly confronting him, Angle decided to shove his former best friend to see what’d happen:

“He didn’t do anything, so I shoved him again and he double-legs me. I mean, you could’ve sucker punched me, but he double-legs me and I’m like, ‘he did not just try to double-leg an Olympic gold medalist, so I laid the hips into him and then I started choking him out nice and slow.”

He then went onto mention how Shawn Michaels is probably the best wrestler he’s ever faced. With Michaels objecting any rehearsals, the two wrestlers got to know each other through meeting each other’s families and discussing ideas for their proposed match. Having seen Michaels and Jericho hitting it out of the park at Wrestlemania XIX, Angle was determined to have the best match he could when it came to him wrestling the Heartbreak Kid at Wrestlemania XXI:

Commenting on the lack of preparation that went into the match, Kurt recalled how Shawn was simply ‘that good.’ He then went onto name Chris Benoit citing that what he did outside of the ring was inexcusable but he was undeniably one of the greatest of all time. Describing him as a shadow, Kurt remarked at how Benoit always kept up with him throughout their matches.

“I’m sorry, but he has got to be in the top three of all time. I mean, you can’t deny that. Even Bret Hart will tell you that.”

Well there you have it. Three wrestlers whom it’d be hard to argue against. With the current roster still trying to establish new stars, rumour has it that if Kurt Angle gets the all clear by the medical team then he’d be up against Seth Rollins. Of course, this should be taken with a pinch of salt as when it comes to the WWE anything can change within a whim.

So are you surprised by the three wrestlers Kurt Angle chose? Which order would you put them in? Who would you like to see Angel face off against in the current roster? Sound off down below!

FATE OF THE FURIOUS Had The Biggest Opening Weekend Ever
James Gunn Will Direct Guardians of the Galaxy Vol. 3
Advertisement
Advertisement
To Top