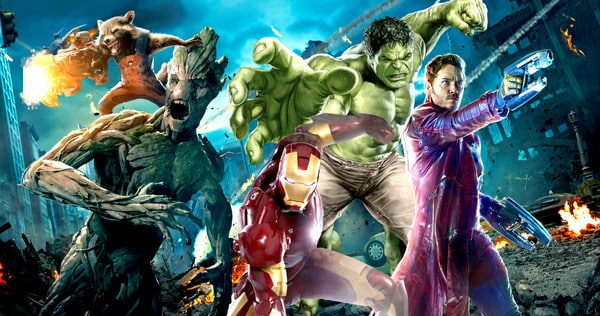 Whilst post credits scenes are in no way a new addition to Hollywood, it was the Marvel Cinematic Universe that revolutionized the way it is used when they first had Nick Fury showing up in Tony Stark’s mansion at the end of 2008’s Iron Man teasing the eventual Avengers film. By the time The Avengers arrived in 2012, the studio had begun adding two post credit scenes to their films, with one foreshadowing an upcoming film with the other being a more humorous scene.

But now they look to be taking it one step further, with next months Guardians of the Galaxy: Vol. 2 having a grand total of five post credit scenes. Read on to find out more.

This week saw James Gunn’s highly anticipated sequel screened for the press, and as is usually the case, details are slowly starting to emerge. The most notable, besides the fact that the film is apparently ‘Marvel Cinematic Universe at its very best‘ is the fact that the screening had four scenes added to the credits. Although this was later corrected by Gunn himself who confirmed that their will be a fifth.

It is presumed that this fifth scene was left off the cut the press saw to avoid potential spoilers making their way online, although with the film opening in just over a week in some territories, it may be hard to avoid.

You can check out the initial tweet from ScreenRant and the tweet from Gunn confirming the fifth below.

It’s likely that this mystery fifth scene will be the one that links the Guardians to the upcoming Avengers: Infinity War, hence why it is being held off for the time being. It’s also possible that one of these will be a set up for the recently announced Guardians of the Galaxy: Vol 3. What the other three could be is anyone’s guess, but if it follows the usual formula it could be that the other scenes are of the comedic variety, akin to the dancing Groot scene from the end of the first film. Given the more cosmic nature of Thor: Ragnarok, one could be a tie in to that film. Possibly introducing Jeff Goldblum’s Grandmaster.

Guardians of the Galaxy: Vol. 2 hits U.S. theatres May 5th, but can be seen in other territories up to a week earlier. So if you are looking to go into the film spoiler-free, you may wish to avoid the internet.

Just to get you pumped up for the film, let’s revisit the most talked about scene from Guardians of the Galaxy below.

What do you think? Is five too many? What’s your favourite post credit scene? Let us know below!