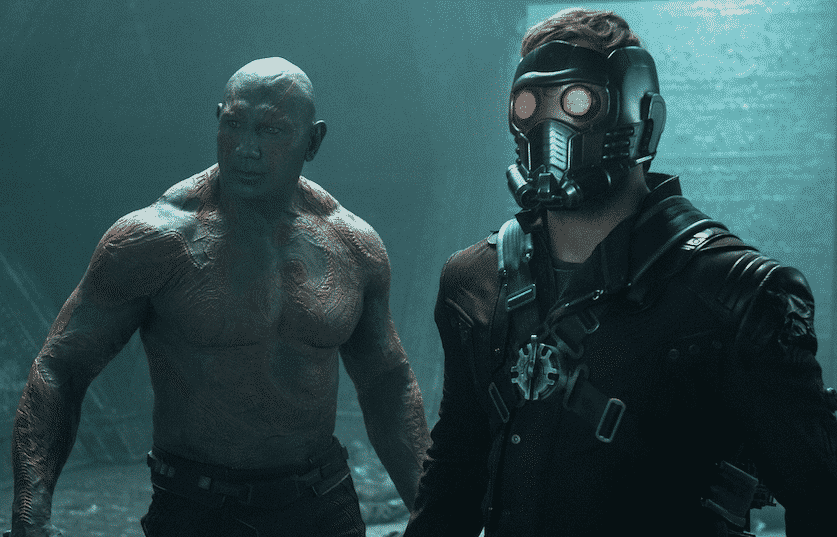 We all knew Guardians of the Galaxy Vol. 2 would be a smash hit, based on the huge success of the first installment. However, when the original began production in 2013, it was quite a gamble. The Guardians were pretty low on the totem pole of well-known Marvel heroes; not to mention the fact that several members of the cast weren’t exactly superstars themselves.

Zoe Saldana was pretty famous; as were Bradley Cooper and Vin Diesel (although their roles were motion captured and their faces were never on screen). However, for the main character, Star-Lord, and the most menacing of the Guardians, Drax the Destroyer, two relative unknowns to the film world were cast.

Chris Pratt was best known at the time for his role as Andy Dwyer on the TV series Parks & Recreation. And Dave Bautista had made a name for himself as a professional wrestling champion, but had very little acting experience – mostly in direct-to-video B-movies. So casting the two of them to lead a Marvel Studios summer blockbuster must have been a butt-puckering risk for the suits in charge of the film. Now, we have a good idea of just why they decided to have so much faith in the two.

Their original screen test is making the rounds online, and it shows that the two actors had chemistry from the very beginning. We see a pre-weight loss Pratt and a solid-gray Bautista reciting the lines from the infamous “why would I drag my finger across his throat?” scene. Pratt’s charm is evident, and even before his intense regimen of acting lessons, Bautista’s comic timing is perfect. He clearly understands Drax’s literal nature very well.

It’s interesting for fans to get this sneak peek at the early goings of the film’s casting, and see just why these two were chosen for their respective roles. And of course, we know that the franchise has done massive favors for both of their careers – Pratt has become a bona fide leading man, with films like Jurassic World, Passengers, and The Magnificent Seven following Guardians. And Bautista has gone on to a respected career showcasing his genuine talent and love for acting, in movies such as James Bond’s Spectre, Escape Plan 2 with Sylvester Stallone, and even Denis Villeneueve’s upcoming Blade Runner sequel.

In short, we’re fortunate that Marvel brought these two together, or we might be missing out on a whole lot of awesomeness today.

Did you enjoy watching this screen test video? Tell us what you think in the comments below!

Continue Reading
You may also like...
Related Topics:Chris Pratt, Guardians of the Galaxy, Marvel, MCU