If You Mock Zack Snyder’s Tragedy, You’re A Piece of Shit 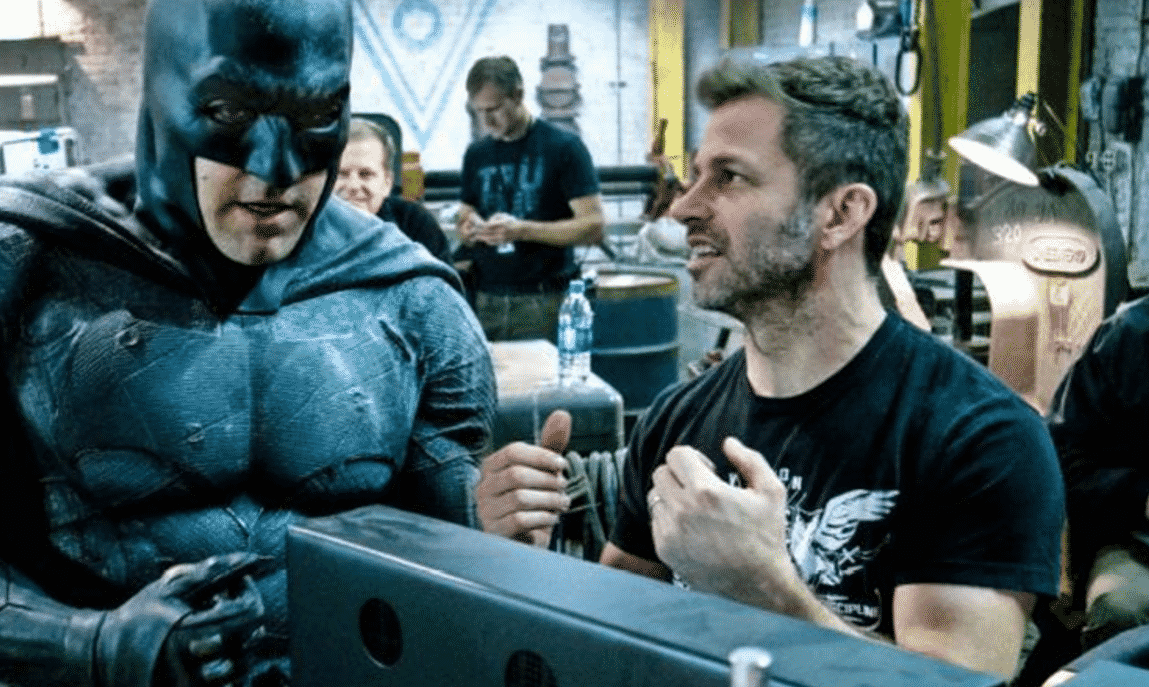 I was planning on writing an article about why Zack Snyder deserves more credit before yesterday’s tragedy, but after reading some of the comments on social media, I felt it was more necessary today.

I’ve also noticed people saying ‘not a fan of Zack Snyder’s films but -‘ before they say ‘their heart goes out’ to the director. Insulting someone’s work before you say you deeply care about what they’re going through makes absolutely no sense.

Sure, you may think Snyder’s criticism is well deserved, and that’s one thing, but some of the comments are pretty pathetic:

It’s not meant to promote these people that are doing it. The majority of them just hide behind a fake username because they’re scared to reveal themselves: 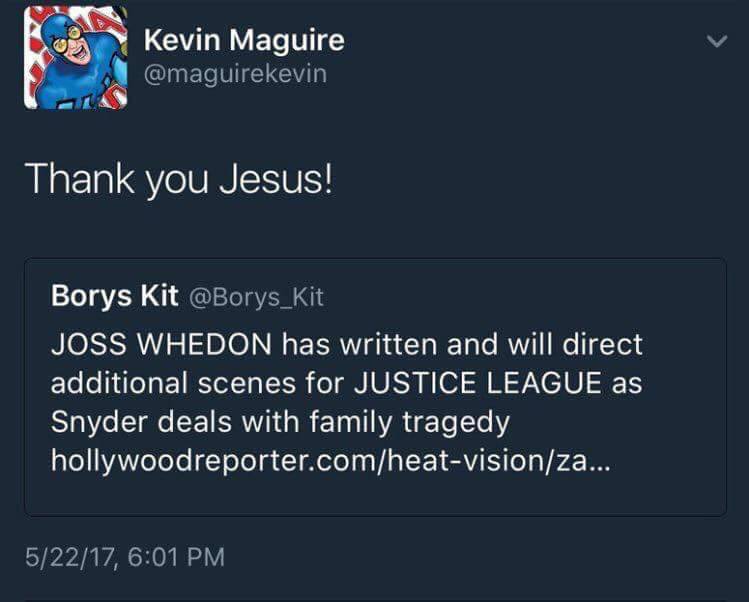 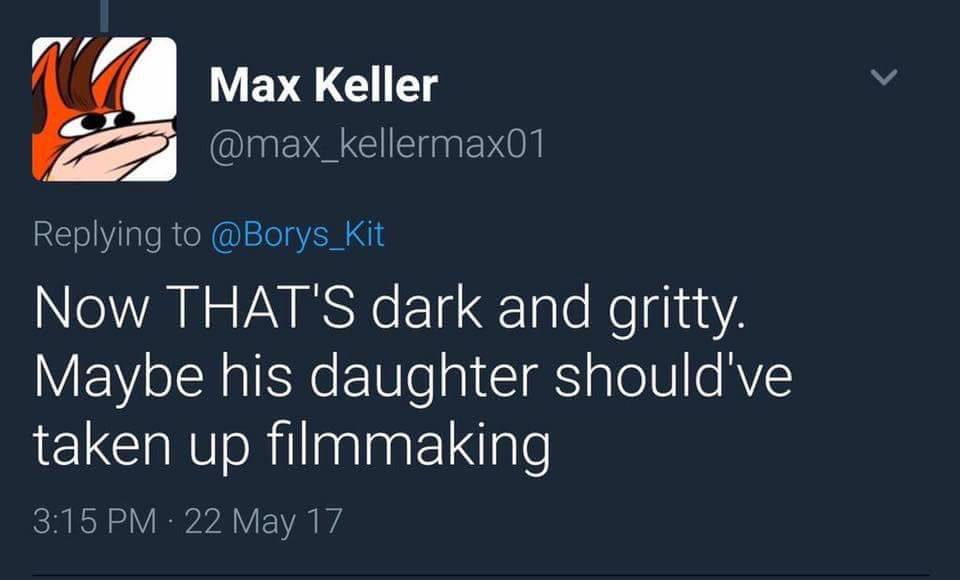 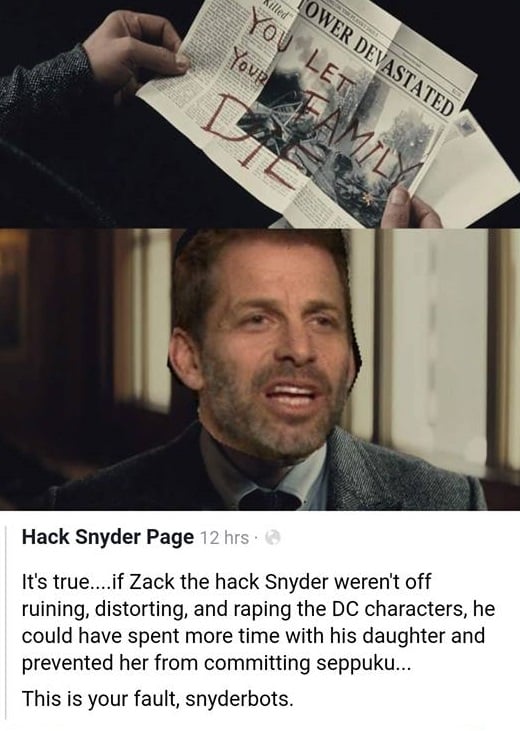 That’s just some of the stuff I’ve seen on social media. There’s even people saying that Zack Snyder only revealed that his daughter killed herself to gain sympathy from critics.

Because I mean, if my child were to commit suicide, that’s what I’d be focused the most on. Getting a high percentage on Rotten Tomatoes and making sure my validation comes back in the form of some good reviews! Justice League being a critical success would be more important than the fact that I just lost my own kid.

Say what you want about Snyder’s films, but there’s no doubt the man has put his entire heart and soul and done everything he possibly can to make these movies as good as they can be.

People understate what the guy has done for The DCEU.

He took this guy:

And made him into an absolute bad ass:

Has given us the some of the best visual Batman shots ever seen on film (and Justice League isn’t even out yet):

Is responsible for this:

There are also people who discount what he did for Wonder Woman: 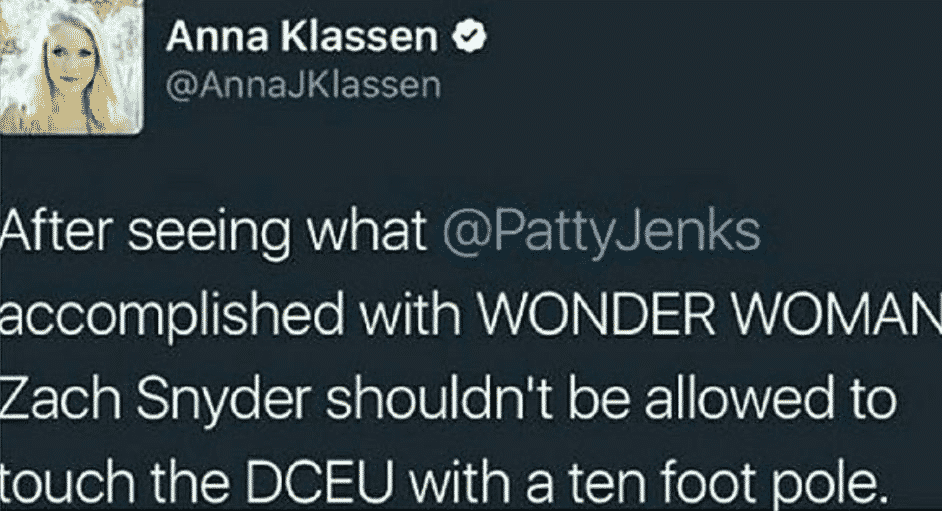 While the film seems to be getting a ton of praise, no one is really offering any praise for Snyder. Let’s quickly take a look at what he’s done.

He cast Gal Gadot as Wonder Woman, gave her a pretty amazing look, and also managed to save Gadot’s acting career in the process (according to the actress)

“So, I almost decided to quit acting. But Mr. Zack Snyder saved my career.”

He saw something no one else really saw:

“We tested a bunch of actresses, as you can imagine. But the thing with Gal is that she’s strong, she’s beautiful, and she’s a kind person, which is interesting, but fierce at the same time. It’s that combination of being fierce but kind at the same time that we were looking for. She can get serious, but she’s amazingly fun to be around. And by the way, she really held her own with Ben in the screen test. Ben was like, ‘Whoa, that girl is something else!’ That was a good sign, because Ben is very tough in the scene, and he’s big and commanding. Anytime that you’re doing a test like that and you’re looking at the other person, you’re thinking, ‘Okay, that’s good stuff.’ That was part of the process, and over time as we got to know Gal, we found out how amazing she is.”

If early buzz on the film is any indication (and most critics praised Gadot for the performance) he was right about that, too.

Snyder also co-wrote the film and produced it and oversaw a lot of the stuff on it, but fuck it. Let’s not give him any credit because we’re busy crying about not liking Batman v Superman or Man of Steel because it ‘ruined our childhood’ or whatever stupid shit people have been saying.

I’d like to see anyone else cram as much into one movie (because Warner Bros. insisted) and come out with a better movie than BvS. I mean, seriously. WB tried to make him make like 10 movies into one and he still came out with a watchable film. That in itself deserves some respect.

I’m not trying to convince anyone that they have to like the man’s films. But if the best thing you have to do with your time is take a dig at someone who’s daughter killed themselves, I’d say you’re in for some pretty bad stuff down the road.

As they say, karma is a bitch.

And for the record, I can be a pretty big troll sometimes, but this – this isn’t even trolling. It’s just pathetic.