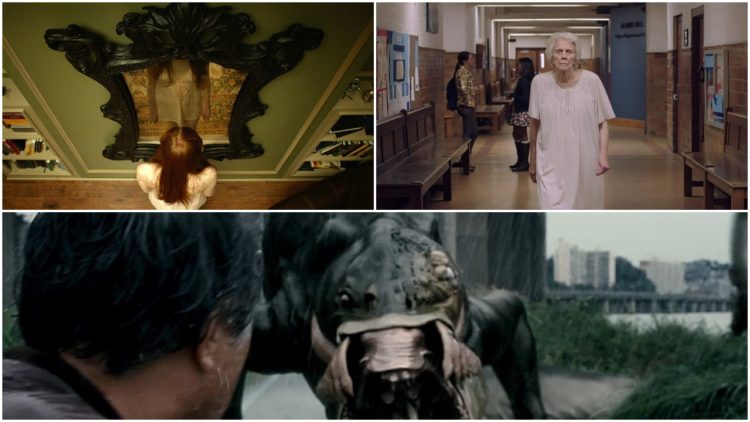 Those of you who regularly visit us here at ScreenGeek will know that we’re a website that likes to stay ‘on trend’, and ‘down with the kids’, so when big movies of a certain genre get released they tend to influence the content of our articles. This meant that with the latest installment of The Mummy franchise hitting cinemas this week, the brief was ‘Monster Movies’.

Naturally, our first thoughts on the subject were to GO BIG, looking at the way in which Cloverfield led to a cinematic resurgence of epic, city-leveling behemoths. But then, we remembered that if the horror movies of last year were defined by anything, it was that the monsters decided to take a more unconventional form, and slip into our houses unnoticed.

So, we decided to showcase the new monsters as an old acquaintance graces the screens this week – six modern baddies (plus one retro film) to keep you up at night. 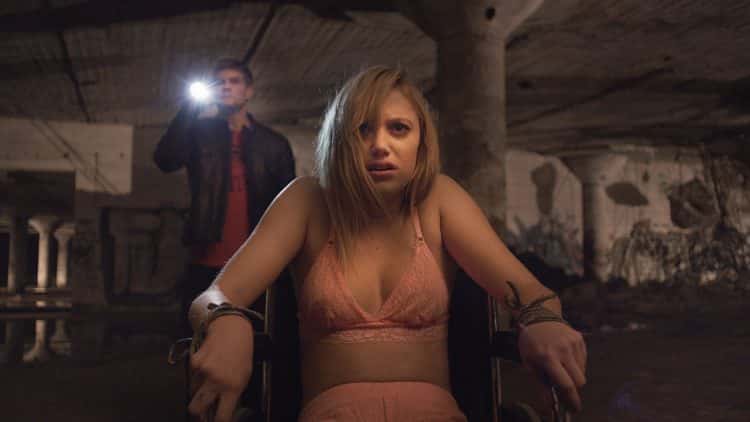 2016 saw a slew of inexpensive micro-horrors, where the protagonists were all exposed to new and inventive forms of supernatural threat. And we’re not talking about the repetitive ‘crash/bang/wallop’ nasties of the Insidious/Conjuring movies. No. This time ’round, audiences were exposed to a whole new level of unstoppable physical danger.

From the claw-fingered lunacy of The Babadook, to the shadow-creeping menace of Lights Out, the monsters were in our bedrooms. Isolating us. Cutting off our escape, unseen to anybody else. But the most horrifying and truly upsetting debut of the year belonged to the relentlessly murderous antagonist of It Follows.

By far the most successful monsters in cinematic history have been the ones who physically violate and invade their hapless victim’s bodies, not just their minds. The  chest-exploding Xenomorph from Alien. The bottom-violating extraterrestrial from The Thing. It Follows plays along with this theme, making its monster the byproduct of a sexual encounter.

A form of supernatural STD, if you will. And the most terrifying aspect of this creature is actually its lack of physical definition, as it constantly adapts its appearance in order to outsmart its victim. It takes the form not only of characters we’ve already met, but also totally unknown characters. The result is that it isn’t only the victim who feels constantly under threat, but the audience as well.

It Follows is so scary due to the the fact that the monster employed here is attacking your sense of reason at the same time as your sense of vision. Rather than spoon-feeding you a spotted history of where the monster originates from and the probable method by which it will be defeated, the villain here is never fully explained.

A series of rules and restrictions are imposed, and as the characters struggle to make sense of them, you as the viewer are also running possible scenarios and hypotheses through your brain whilst simultaneously scanning the screen constantly for a slow-moving, silent figure at the screen peripheries. You can see it. But you can’t stop it or seek assistance. Survive or succumb. That’s just the way it’s gonna play out.

There’s no singular monster in The Void. Rather, we’re introduced to a vicious influence from a world more ancient than time. It begins with a group of cultists, all who are drawn to create corruption. But then it begins to influence the deceased to shape-shift into monsters; horrible creatures that belong in a John Carpenter film. Finally, we even get to see the world this influence stems from – the titular Void – and it is a place that rings true to the dark dimensions featured in Clive Barker and Lucio Fulci films.

The Monster is what the title says. The film circles around mother and daughter as they are trapped in their car on a lonely road at night with visibility no more than 10 feet around them. There is something lurking in the shadows ready to pounce at the drop of a hat, so every move outside the safe haven of their vehicle must be calculated with no error. Simple monster film premise but sometimes simplicity adds so much more than expected.

What makes this monster and film such a worthy choice is that the creature is hardly revealed through most of the film leaving the viewer’s ideas of what it looks like up to their imagination. Although many monsters through cinema history can be deathly frightening, there’s nothing more scary than letting your mind create the monster using everything you fear as building blocks. We know the creature is fast, strong, big, and very hungry, so tension in the film is raised very high and never lets up ‘til the ending credits. Now that’s a how you do terror. 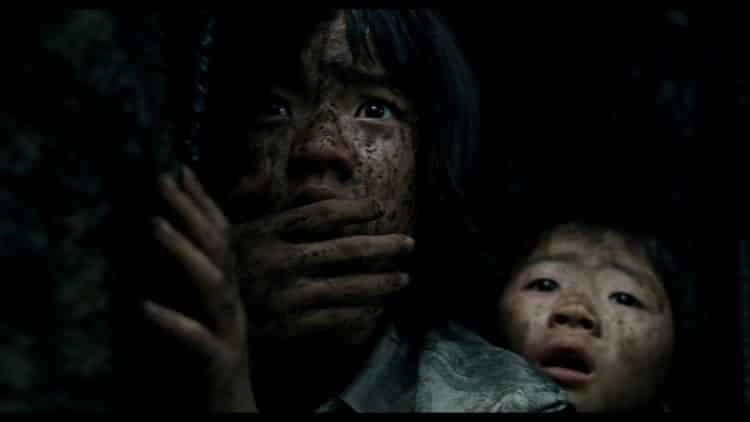 No monster list is complete without a kaiju, and as the big guy from Japan has a decent marketing team, allow us to highlight his lesser known, South Korean coworker.

The Host follows a father trying to rescue his daughter from a giant river monster. A simple enough premise, but executed rather flawlessly by Bong Joon Ho (who might be better known for Snowpiercer here in the West), the film is a study in family relationships and how they may be affected by huge mutant amphibians coming on land and eating people. With standout performances from both the crew and the monster itself, The Host is an excellent example of the versatility of the monster genre and how a simple idea can morph into a brilliant piece of film.

What’s one of  the most horrifying ideas when dealing with monsters? The fact that the monster might be someone very, very close to you. Goodnight Mommy puts you in the mind of young twin brothers as they try to find out what happened to the woman they’re living with that they also call “Mother”. There are many reasons for them to believe that something is amiss and they have to find ways to solve the mystery without “the monster” noticing.

The film is done on the psychological suspense spectrum and decided not to rely on shock and jump scares. What this film does is play with the reality that the twins are witness to and leans more toward the idea that children’s findings might be correct. But, be prepared for the last 5-10 minutes of the movie as the ending takes an unexpected turn that might leave a scar on your psyche. You have to give it up to these foreign genre films though. When they want to mess with your head, they do it with grace.

In the grand world of monsters, one would not consider a mirror to be high on the list of supreme evil beings. But, Mike Flanagan, who has proven himself to be quite a man of horror with Hush and Ouija: Origin of Evil, went ahead and wrote a story about a malevolent mirror, and hot dang, is it actually really scary.

Unlike pretty much every monster on this list, the mirror does not move or make attempts to kill its intended victims. In fact, that’s kind of the point of Oculus; there is no obvious, clawed nightmare coming for you.  Through clever storytelling and camera work, you are never quite sure if it is even the mirror making things happen, or if it is a convenient excuse for the insane machinations of a brother and sister who have experienced intense loss. The mirror is a monster that gets under your skin by asking you a direct, horrifying question – is it me? 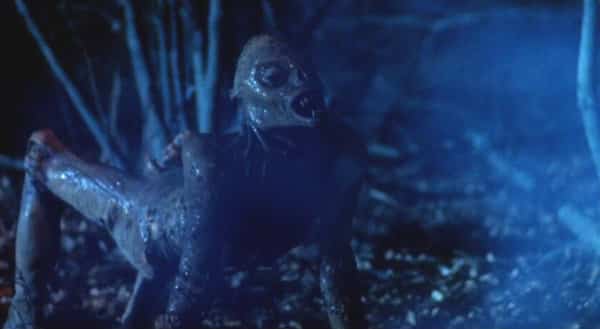 Xtro introduced one of the most original takes on an alien monster I’d ever seen. A ripoff of Alien on the surface, the creature in Xtro actually demonstrates a variety of disturbing concepts that the franchise never dared to touch. The monster first appears in the form of a backwards-legged quadruped before impregnating a woman and dying. But unlike Alien’s chestburster, this woman gives birth to a disturbingly full grown man. Taking on the identity of a person abducted years prior, he infects the abducted man’s son and turns him into an alien capable of outright supernatural power.

Interestingly enough, he’s never referred to as an alien in the film. Now up to viewer interpretation, you could easily imagine the alien as some kind of interdimensional being. The kind you’re likely to find in a HP Lovecraft story. It’s truly a different kind of alien and one you’re sure to remember.

What did you think of the list? Did we miss any? Let us know in the comments below!