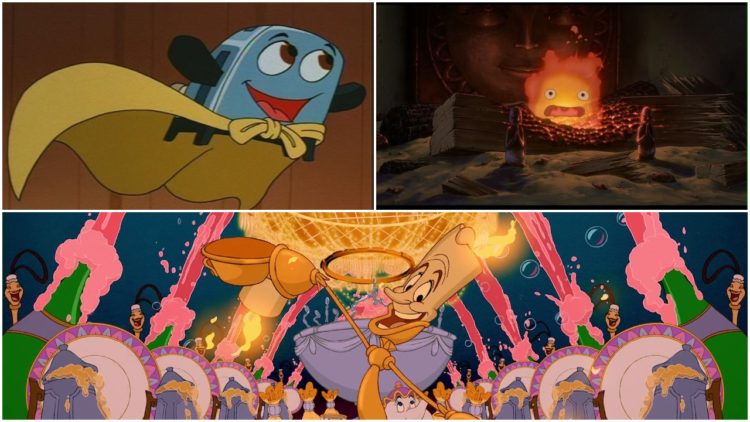 With Cars 3 coming out this past weekend, Transformers out this week, and the anticipated return of Toy Story, we here at Screen Geek have got talking things on the brain. The way we see it, humans are boring and animal companions are cliched, and we think the world agrees, if movie trends are to be analysed.

So, with that, we bring you what we believe to be the definitive list of most awesome inanimate characters in film (and one special bonus one from TV). Robots, candlesticks, and fireballs, oh my! 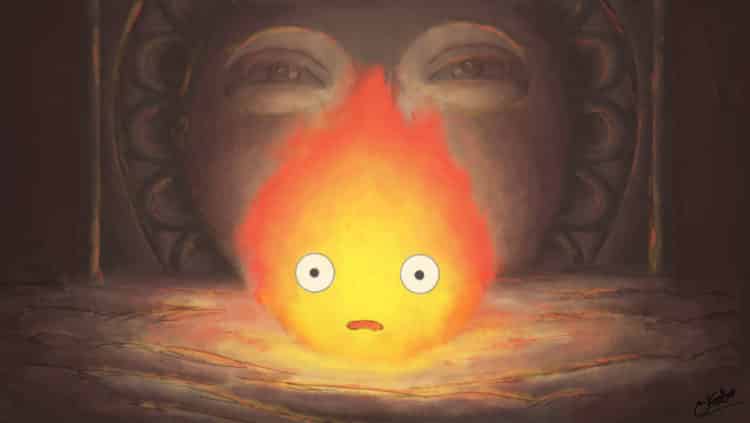 Miyazaki’s personal favorite out of his impressive body of work, Howl’s Moving Castle is a beautiful film. As common with Miyazaki, the film centers around a young woman who is coming to terms with who she is in a world that is in turmoil; in this case, one Sophie, a hat maker cursed by a witch who happens upon a giant, moving castle and the fire that moves it.

Oftentimes, you see with talking inanimate sidekicks a throwaway character. They exist only to serve as a humoristic foil for the main character to play off of – the movie would move along well enough without the carpet in Aladdin having a personality; it just needs to move. Not so with Calcifer.

Calcifer, a fallen star turned hearth flame, is, arguably, the crux upon which the film relies. He binds Sophie to Howl. His magic is what makes the castle in the title do its titular moving. Without his conversation and permission, the story does not exist. Also, he is super cheeky and cute, so how could he not make it on the list? 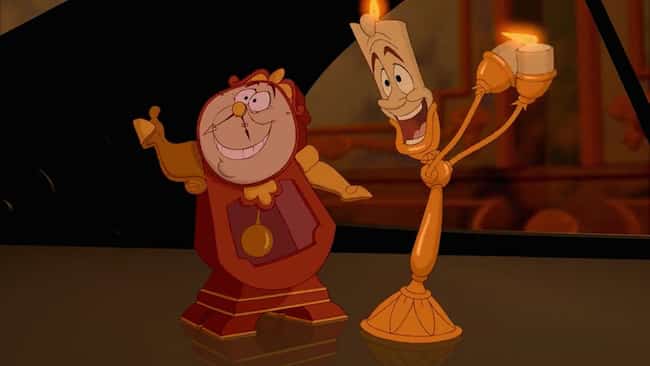 We all know the tale as old as time. Girl is on the outside. Girl loses herself for someone she cares about. Girl finds true love. But the story wouldn’t be what it was without some of the less human characters in this classic film. And no, I don’t mean the Beast.

The first two characters to greet the audience in that gloomy castle are Cogsworth and Lumiere. Always arguing back and forth about what is their own well being and doing what is right, they bring a light comedy to some of the more serious parts so it doesn’t become too dark and depressing.

Mrs. Potts and Chip have the mother and child relationship we all wish we had. With life getting in the way, we might not get the chance to spend time with our mothers as much as we’d like. This duo is stuck in a situation that isn’t ideal, but time stands still which makes the purity of their love for one another hard to move along from.

This is a love story much deeper and truer than between a man and a woman. It transcends all bringing friends and family together as well. 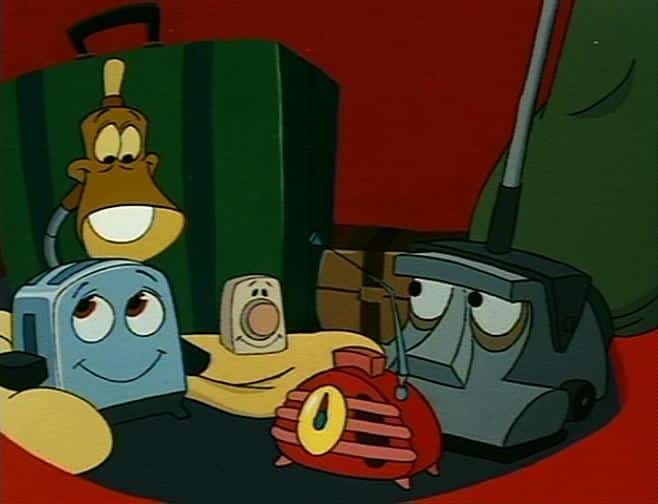 Sure, many things out there in the movie world come to life and help the main character (most likely a human) to reach that ultimate goal or well deserved MacGuffin. But, what if the MacGuffin is a human and the main character is a “thing” trying to reach it? Well, The Brave Little Toaster answers that question.

For anyone that let their childhood slip by, The Brave Little Toaster followed regular home appliance Toaster and his friends Blanky, Kirby, The Radio, and Lampy. Their journey is to travel the land of America to find Young Rob (Aka The Master) who accidently left them behind when he moved away to college. Toaster’s determination to be with Young Rob showed that if you have that special someone, who makes you feel all warm inside, with so much joy that you were ready to pop, that you could and would do anything for them.

If an inanimate object coming to life to be with its master isn’t love, then I don’t know what is. The movie was cute and funny, yet still fit in that weird 80’s Disney era which gave us all pause on the “G” rating, because of some the traumatic imagery of the story. Still, this was a damn good movie to watch with a simple premise that took simple items and made them extraordinary. Dust off that old VHS and relieve a forgotten memory for a little bit of joy in your life. Just keep your eyes on any of the household appliances you might’ve pissed off in the past. 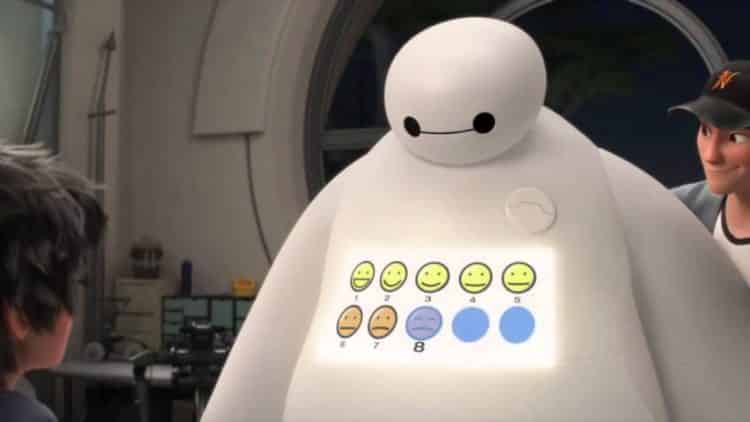 I’ll be the first to admit; I don’t care for many animated films, especially the ones geared toward young children. But every now and then, one comes along that’s so genuine and sweet that it melts even my frozen heart.

Such was the case with Big Hero 6, the tale of teenage science prodigy Hiro Hamada and the unlikely friend he finds during the darkest time of his life. After a devastating loss, young Hiro feels he’s been left alone to cope. However, he soon discovers that his older brother, Tadashi, has created a robot named Baymax. Baymax is intended to be a “personal healthcare companion” – a sort of portable, instant nurse. But he doesn’t just apply band-aids and ask for numbers on your pain scale. Baymax genuinely cares about Hiro’s wellbeing, his happiness, and his ability to move on. He also has a lot of memories of the person Hiro has lost, making him someone the young boy can trust and confide in about his sorrow.

Baymax is such a unique, charming, and thoroughly adorable character that you can’t help but fall in love with him instantly. The fact that this is actually a kickass superhero movie is secondary to the endlessly endearing personality of the big white balloon with the gigantic heart. I dare you to watch this one, and not come out of it needing a Baymax in your life. 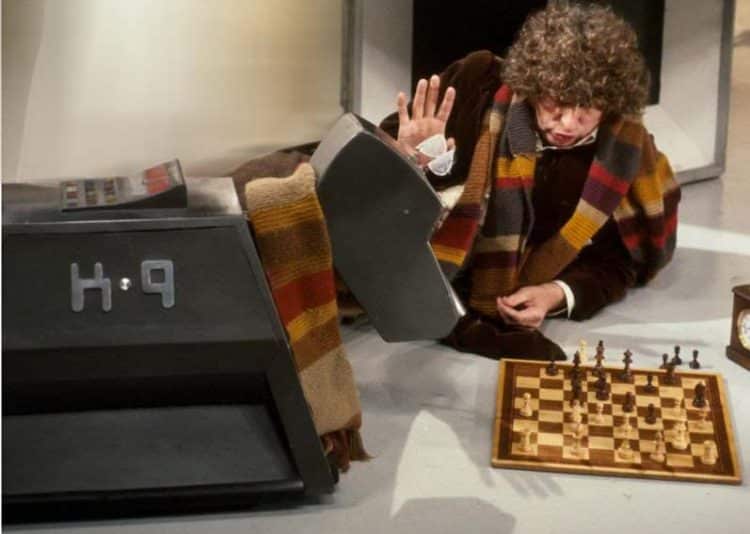 Doctor Who is a show not short of strange, weird, and wonderful things. But even a Timelord who travels in time and space, like every man or woman in this day and age, needs a little company. One of the show’s greatest ‘companions’ is far from the Doctor’s usual choice, and is, of course, K9 the robot dog. The metal pooch’s iconic high pitch, whiny but obedient voice has returned time and time again to the screen.

Created by Bob Baker and Dave Martin, K9 first appeared in the 1977 Doctor Who story “The Invisible Enemy.” The dog has gone through many upgrades and renewal of his models, with four models appearing in Doctor Who. Left with Sarah Jane Smith by the Doctor (Tom Baker) in 1981, K9 returned when the show was revived in 2006 in “School Reunion.” Fondness of K9 has kept him around in Doctor Who and The Sarah Jane Adventures, though he hasn’t appeared since Elisabeth Sladen’s (Sarah Jane Smith) passing in 2011. Who knows if we’ll see the iconic dog return, but his character will certainly be remembered as TV and Film’s best and favourite robot dog (…to me at least).

What do you think of the list? Did we miss anything? Let us know in the comments!