Since her 1999 directorial debut The Virgin Suicides, Sofia Coppola has proven to be one of the most significant auteurs in the industry. Not only is she one of two female directors to win a Best Screenplay Award at the Oscars, but is also the only American female director to win Best Director at the Cannes Film Festival. Her work, while somewhat divisive, has displayed her wonderful precision and insight behind the camera.

Coppola’s latest venture is The Beguiled, the film that won her the coveted Cannes trophy. As a loose adaptation of Thomas Cullinan’s novel (as well as the 1971 film), the film follows a small girl’s school in the south during the Civil War. When one of the girls stumbles upon an injured Union soldier, they decide to bring him in, causing internal rifts in the house.

Based on Coppola’s track record and the acclaim of the original adaptation, expectations were high for this film to live up to the standard. Thankfully, The Beguiled is an accomplished drama that simmers with raw emotion and depth, ranking it among Coppola’s best work.

Performance-wise, this is one of the most accomplished ensembles of the year. Nicole Kidman gives audiences a wonderful reminder of just how good of an actress she is, nailing the icy persona of her character. Kristin Dunst is the standout however, with her calm melancholy having the most dramatic potency. Casting agents would be hard-pressed to find an actor to play charming better than Colin Farrell, whose seduction of the house is thankfully never overplayed. Elle Fanning, Angourie Rice, and Oona Laurence are all very good as well, delivering performances beyond their years.

The Beguiled may be considered thin for some, but personally I found the film enriching. Coppola steady hand is the perfect fit for the material, giving the audience time to breath with these characters and understand their ticks, despite knowing little about their background. Due to the restraint nature the woman must act at, there is a lot of raw emotion simmering under the surface, which kept me engaged. Just seeing how the groups dynamic changes throughout, as the women are driven by lust, jealously, and desire to escape their confined lifestyle is fascinating. The contrast between their quite abode to the booms of gunfire that surround it is quiet telling, and makes for a great aesthetic. 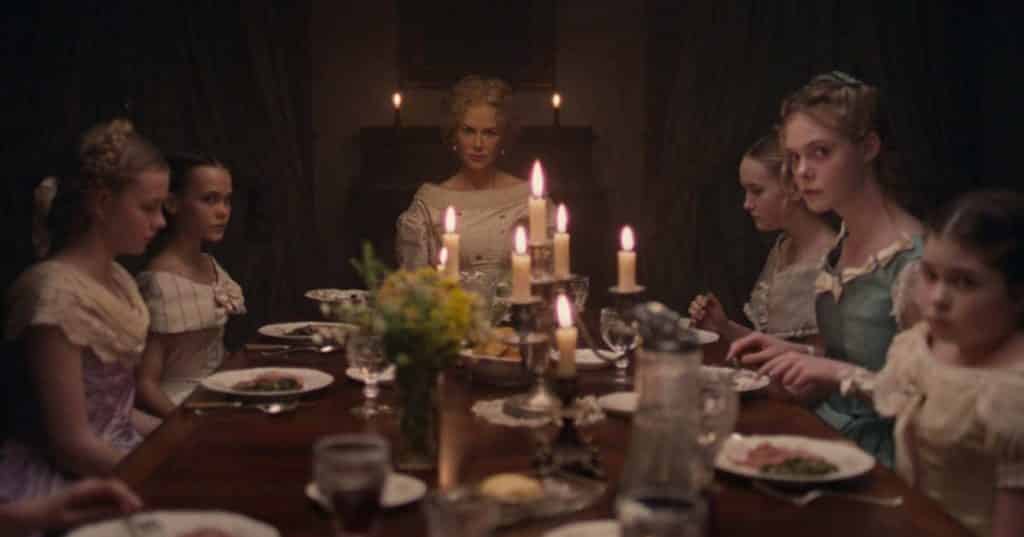 As a director, Coppola delivers her unique filmmaking touch to this material. The film is beautiful, with her collaboration with cinematographer Phillippe Le Sourd capturing some profound moments. Where Coppola’s skill truly shines is in the tonal balance, with this film ridding a fine line between a seductive drama and dark comedy. Coppola is able to make both contrast each other perfectly, making it a seamless fit.

Much controversy has been made about Coppola’s changes from the original material, especially her removal of slave characters. While the debate over diversity is fair, I personally think Coppola’s choice works artistically. By removing the slave characters, Coppola is able to transition her focus less on the mysterious man, but more on this fascinating group of women. She deserves more credit for taking acclaimed source material and interjecting her own concepts and ideas seamlessly into the narrative.

My issues with the film are fairly minor, but there are some persistent issues. Even as someone who hasn’t seen the original, the story for the most part is fairly predictable, aside from a few fun twists the film takes along the way. This does take away from some of the dramatic tension the film develops. Also, there is a lot of repetition in the film, which can be hit or miss at times depending on the situation.

The Beguiled is one of the year’s most accomplished films, providing a masterclass of acting as well as another example of Sofia Coppola’s immense talent. I am fascinated to see what to she has in store next for audiences.