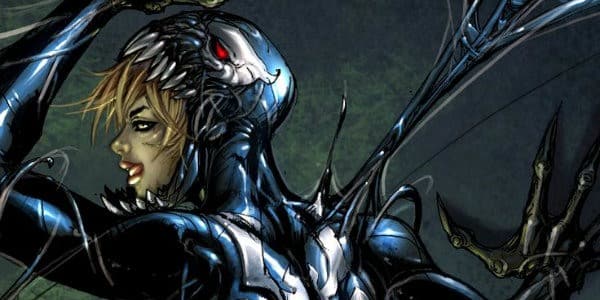 While the superhero genre is known for repeating the same formulas time and time again, studios have recently been taking more risks. And so far it’s been working as apparent with films like Deadpool and Logan. Now Sony Pictures is prepping to take some risks, intending to make a Venom film based on the character from Marvel’s Spider-Man comics.

While it’s been revealed that Carnage is set to be the main villain, there’s apparently another big surprise. According to the Hashtag Show, the “Bride of Venom” will be making an appearance.

The Bride of Venom was originally Ann Weying, Eddie Brock’s ex-wife, who becomes a host for the symbiote.

“Ann was a lawyer in the comics but Sony has not yet committed to her back story for the film. The studio, working with a new script from Jeff Pinkner and Scott Rosenberg, is looking to cast an actress in the range of 25-32, so a few years younger than Hardy, to play the role of Ann. In the comics, Ann was shot by one the characters who took the name Sin-Eater, only to have her life saved by the symbiote. It set off a series of events that lead to her depression and suicide.”

The site continued to theorize about the film’s plot.

“It’s unclear what the plot of the film is, but we expect the symbiote to be the Ultimate version which was a bio suit co-created by the fathers of Eddie Brock and Peter Parker.”

While it’s not clear whether or not the film will properly link with any established Spider-Man franchise, there’s always the possibility that this version of Venom will connect with the superhero later on.