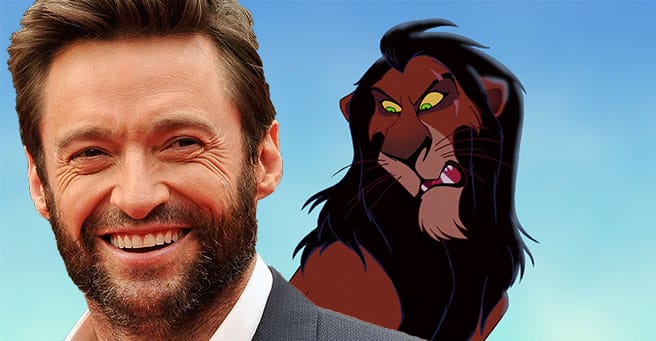 Hugh Jackman’s stint as Wolverine may have ended this year, but don’t expect him to go away anytime soon as the actor turns to the Mouse House for his next project.

The star-power of The Lion King remake continues to build as Hugh Jackman joins an already stacked cast as the villainous Scar.

If your memory of the 1994 original is a little fuzzy, Scar was a flamboyant, scheming baddie who organized the assassination of his brother King Mufasa in order to ascend to the throne. He ruled poorly to say the least (his kingdom went from land of plenty to barren wasteland in record time) and was ultimately defeated once Simba made his heroic return.

Personally, I’ve always thought of Scar as one of the best villains in Disney history. This is due mostly to Jeremy Irons’ terrifically theatrical and sickeningly evil voice acting. Hugh Jackman certainly has big shoes to fill, but I think that if anyone can live up to Irons, it’s him. He’s got the vocal range and the sense of theatrical showmanship to pull it off.

I always imagined him as more of a Gaston though. Missed opportunity.

Jackman will be joining a cast that includes Donald Glover as Simba, James Earl Jones as Mufasa, John Oliver as Zazu, and Billy Eichner and Seth Rogen as Timon and Pumbaa. Rumors have also been floating around about Disney wanting Beyonce as Nala but nothing is official yet.

So are you excited for The Lion King? Sound off below!

Continue Reading
You may also like...
Related Topics:Hugh Jackman, The Lion King