Will Smith Cast as Genie In ALADDIN Remake 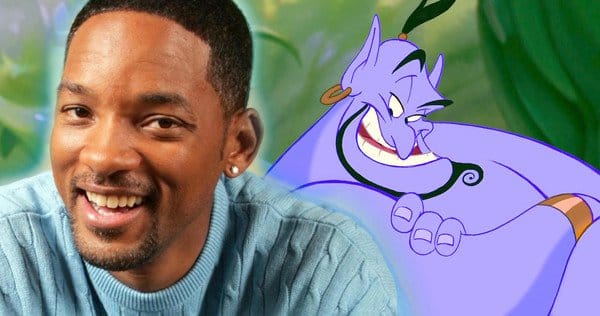 We’ve had so much news regarding live action remakes of Disney films lately that I’m starting to wonder what’s next. A live action Brave Little Toaster? Home on the Range perhaps?

For now though we’re only dealing with a live action remake of Disney’s 1992 project Aladdin which has just found its three leading actors. Rolling Stone reports that Egyptian born Canadian actor Mena Massoud has been confirmed as Aladdin and Naomi Scott (who you may remember as the pink ranger from the Power Rangers reboot earlier this year) will be playing Jasmine.

Let’s face it though – the roles of Aladdin and Jasmine aren’t the most critical ones to nail. While those two are certainly great characters, the most important part of the 1992 film was a certain blue guy voiced by Robin Williams in one of the single greatest pieces of voice work in this history of cinema.

The most interesting bit of casting news is that Will Smith has been confirmed to replace Williams as The Genie. I don’t even need to say that Smith has big shoes to fill. We all know it. Smith is a charismatic fellow, but he’ll need to give it 100% if hopes for his interpretation of the character to even come close to Williams’.

The film will be brought to us by the extremely hit or miss director Guy Ritchie so it’s hard to say whether this remake will be worthwhile. I guess we’ll just have to wait until the movie comes out.

Aladdin will hit theaters in 2019.

So are you excited for Aladdin? Sound off below!