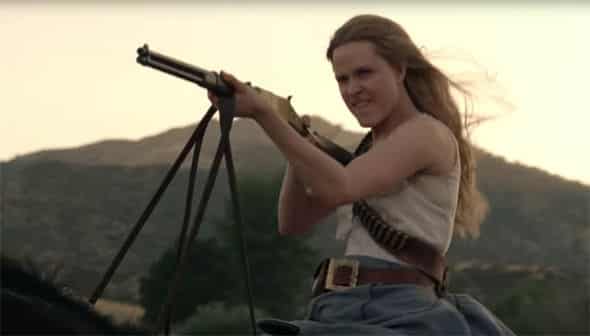 It’s finally here, folks. We finally got a glimpse of the new season of Westworld. Last season we saw the beginning of the uprising from the androids that made the Wild West—amusement park an entertaining spot for high paying guest.

As the bodies starting to fall and the mystery of park began to unravel, the credits rolled and audience were eager to see what happens next. HBO decided to wet are whistle just a bit by giving the audience a trailer playing to the tune of Sammy Davis Jr’s I’ve Gotta Be Me and gave us a look of what’s to come in 2018.

As you can see the chaos only ramps up. Bernard Lowe (Jeffery Wright) finds the corpse of a tiger oddly placed near a lake and a clip of man hanging from a tree trying his best to grab a gun. After that, the shit hits the fan as blood and death fills the screen as the android start to hunt the guest and this time, the bullets are real.

Dolores Abernathy (Evan Rachel Wood) looks to be having a blast as she is just picking off people left and right while riding her horse at high speed.

A few more shots of bodies inside the park and behind the scenes with Maeve Millay (Thandie Newton) discovering the massacre.

We get a finish shot of the Man in Black (Ed Harris) smiling with blood on his face as he finally gets what he always wanted, unbounded realism in the park.

The new season looks like it’s going to be something close to amazing and this trailer only hypes the show to new levels. Return to Westworld next year. It’s sure to be another great ride.