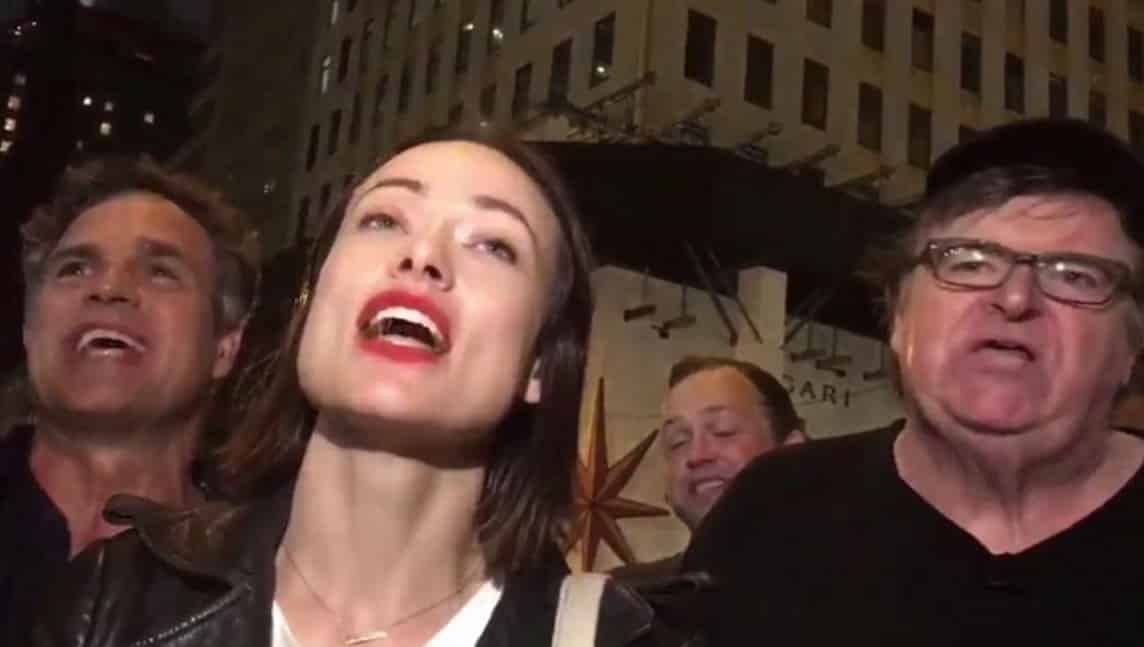 Politics are really going off the rails right now, with nearly everyone expressing their political opinions – even if you don’t want them.

There used to be a time when people could have debate, but that seems to be a thing of the past, as everyone seems to disagree with each other at this current moment in time.

The Incredible Hulk actor Mark Ruffalo is one of them, and he had this to say:

“There’s two sides of this: people who fight Nazis, and Nazis, and that’s it,”

Michael Moore, had this to say:

Here’s some of the videos and pictures from the protest:

Heading to Trump Tower for a candle light vigil for Heather Heyer who was murdered by an Alt Right American Nazi.

The cast that #resists together, impeaches the maniacal dickhead together. Our theatre is next door to Michael Moore’s, and we all hopped on a bus after our shows to protest in front of Trump Tower. (Tom is English but is horrified on our behalf and added his voice to the mic checks like a real New Yorker.) Thank you @michaelfmoore for making this happen. #1984 #TermsOfMySurrender

Michael Moore arranged for buses to take audience from his Broadway show, at which Mark Ruffalo showed up tonite, to the Trump Tower protest pic.twitter.com/B0fVghg9PA

That press conference kinda just blew up my brain. Everyone should watch that entire thing from beginning to end. It's truly shocking.

What…the…FUCK is happening in our country? Our president just…sided…with…Nazis and white nationalists. Holy. FUCK https://t.co/YJzAQBUJgp

I wish I did. This man is dangerous and demented and needs to be removed. #MuellerTime https://t.co/lLYtAOgCjZ

One good thing about that abomination of a speech: it's now impossible for any Trump supporter to pretend they don't know what he is.

Mark Ruffalo was also in a video (along with other Marvel Cinematic Universe actors) urging people to not vote for Donald Trump.

Whatever your thoughts are – be sure to tell us in the comment section below!